‘Green New Deal’ all the rage at CPAC 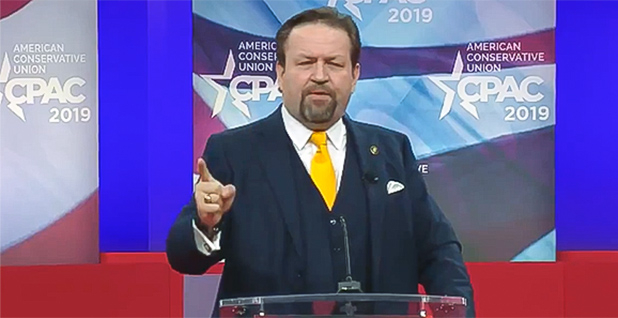 On the conference’s first full day yesterday, the aggressive proposal to fight climate change through a rapid shift away from fossil fuels came up repeatedly.

To the right-wing presenters, the "Green New Deal" epitomizes a shift in the Democratic Party toward hard-left socialism and away from free markets.

As the GOP homes in on an election-season strategy of condemning socialism with renewed energy, the proposal from Rep. Alexandria Ocasio-Cortez (D-N.Y.) — herself a democratic socialist — and Sen. Ed Markey (D-Mass.) was a frequent target of scorn.

Sebastian Gorka, a conservative national security pundit and former adviser to President Trump, elicited boos from the audience at the mere mentions of Ocasio-Cortez and her proposal.

"It’s a watermelon," Gorka told the audience members, imploring them to use his metaphor themselves. "Green on the outside, deep, deep communist red on the inside."

Gorka told the crowd, "You are on the front lines of the war against communism coming back to America under the guise of ‘democratic socialism.’ Which is just a [politically correct] term for communism. Donald J. Trump is never going to let it happen."

Sen. David Perdue (R-Ga.) attacked the deal from the spending angle, arguing that the federal government simply cannot afford it.

"This is such a naive thought in the world of debt that I can’t even respond to it. I mean, this is so immature and naive that you just can’t — there’s no way it can work," Perdue continued.

"Put that in perspective: We’ve only collected $2 trillion in all federal income tax revenue to date. That’s how draconian this is. There is no way America can go down that road."

Michi Iljazi, director of government affairs with the American Conservative Union, which puts on CPAC, said the proposal was in line with historical socialist policies.

"There’s nothing new about the ‘Green New Deal.’ These are the same failed ideas that have not worked for a long time," Iljazi said in a discussion with Perdue.

"And the only thing that’s different now is they’re just not telling you how much they think it costs, because they know the number’s so astronomical that nobody’s going to believe it.

"And so I think we have to be very careful when we’re talking to folks, young folks, that they’re not tantalized by the allure of all these things that they think that they want, and there’s no cost in terms of how to pay for it."

‘A threat to their profits’

The Sunrise Movement, the chief outside group pushing the "Green New Deal," didn’t mind the attention from the right.

"It’s clear that the Koch brothers and their billionaire friends see our movement and the ‘Green New Deal’ as a threat to their profits," Sunrise spokesman Stephen O’Hanlon told E&E News, referring to the conservative brothers Charles and David Koch, who frequently fund efforts to defeat climate change policies.

Earlier in the day at the conservative confab, the "Green New Deal" actually was on the agenda for a brief presentation by Reps. Jim Jordan (R-Ohio) and Mark Meadows (R-N.C.) and ACU Chairman Matt Schlapp. The session was dubbed "Marketing Marxism: There’s Nothing New About the Green New Deal."

"With this ‘Green New Deal,’ they’re trying to get rid of all of the cows," Meadows said, referring to supplementary information on the deal from Ocasio-Cortez’s office that it later retracted. "But I’ve got good news: The Chick-fil-A stock will go way up, because we’re going to be eating way more chicken."

Larry Kudlow, Trump’s top economic adviser, sought to tie the deal directly to the president’s pledge during his State of the Union address in February that "America will never be a socialist country."

"The ‘Green New Deal’ would literally destroy the economy. Literally. It would knock out energy, transportation, airlines, jobs, businesses. We would probably lose 10 to 15 percent of our [gross domestic product]," Kudlow told the crowd.

"So they’re proposing, essentially, a state control, state, government control of the entire economy. Central planning on a grand scale," he said.

The "Green New Deal" is slated to be the focus of a presentation at CPAC today by the Heartland Institute, a conservative group that’s outspoken in its skepticism of mainstream climate change science.

Tim Huelskamp, a former Kansas Republican congressman who is now Heartland’s president, will also give a speech on the main stage at the event.