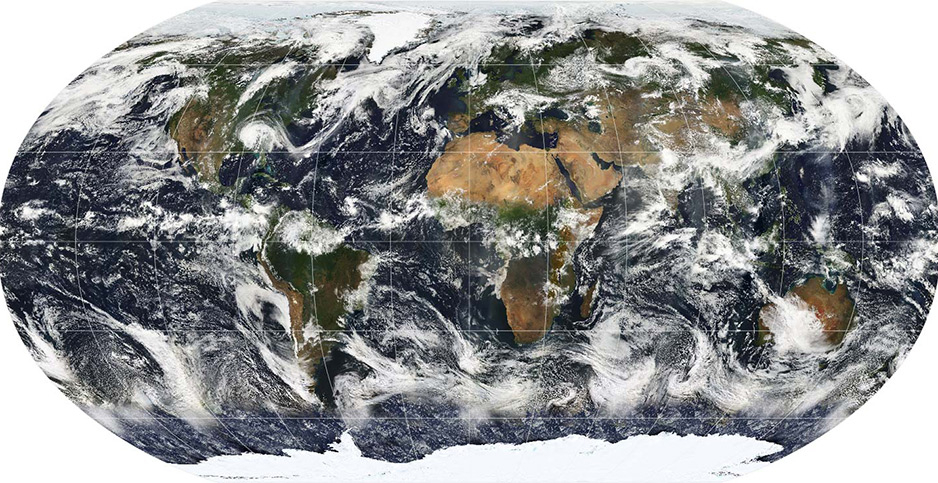 How much warming will greenhouse gas emissions cause in the coming years? It’s one of the most fundamental questions about climate change — and also one of the trickiest to answer.

Now, a major study claims to have narrowed down the range of possible estimates.

It’s "the most important climate science paper that’s come out in several years," according to climate scientist Andrew Dessler of Texas A&M University, who was not involved with the study.

The effort also illuminates some of the challenges of a decadeslong scientific quest to predict the strength of future climate change.

At the heart of the new study is a concept known as "climate sensitivity" — how sensitive the Earth is to greenhouse gas emissions and how much it’s likely to warm in response. In studies, scientists often focus on the amount of warming that might be expected if carbon dioxide concentrations doubled their preindustrial levels.

It’s a hypothetical scenario, but one that’s not impossible.

Prior to the industrial era — around 150 years ago — global CO2 concentrations hovered around 280 parts per million in the atmosphere. Doubling that amount would put the total at 560 ppm.

The metric has existed for decades now. In 1979, a groundbreaking report led by Massachusetts Institute of Technology scientist Jule Charney — dubbed the "Charney Report" — suggested the planet’s climate sensitivity probably fell within a range of 1.5 to 4.5 degrees Celsius for a doubling of CO2.

In the years since, that range hasn’t changed much. Most studies have found that the amount of warming to be expected after a doubling of CO2 probably falls within those boundaries.

The most recent assessment report from the United Nations’ Intergovernmental Panel on Climate Change, published in 2014, suggested there was about a 66% chance — a "likely" probability, in other words — that the climate sensitivity range falls between 1.5 and 4.5 C. That’s anywhere from 2.7 to 8.1 degrees Fahrenheit.

Many of the difficulties narrowing the range have stemmed from the sheer complexity of the question.

In a simple sense, greenhouse gases in the atmosphere warm the Earth by trapping heat from the sun that would otherwise be radiated back out into space. But there are other factors that can affect the total amount of warming the planet experiences over time.

These include physical changes in the air that makes up the atmosphere, the amount of water vapor in the atmosphere, and the melting of snow and ice on the Earth’s surface, which can speed up the rate of climate change as they disappear.

Then there’s the question of cloud feedbacks, often cited by scientists as one of the biggest uncertainties about future climate change. Warming in the atmosphere can change the size, density and lifespan of clouds. And clouds, in turn, are capable of either worsening or lessening global warming, depending on their characteristics.

Over the years, though, scientists have dramatically improved their understanding of the Earth’s climate response.

"Behind the scenes, underneath the hood, our understanding of a lot of the processes was much better," Dessler told E&E News. "And so I think that even though the range hadn’t changed, that masked a real tremendous improvement in our understanding."

The new study narrows the range at both ends, particularly the lower end. It finds there’s a 66% chance that the sensitivity range falls between 2.6 and 3.9 C of warming (4.9 to 7 F).

Perhaps most importantly, the new study investigates multiple lines of evidence when it comes to climate sensitivity. It uses global climate models, which simulate large-scale processes across the whole world. It also uses detailed, process-based models, which can simulate fine-scale events related to the formation of clouds.

It also examines the Earth’s response to recent greenhouse gas emissions, since the onset of the industrial era. And it even uses ancient ice and sediment samples to look back at the Earth’s long-term climate history and evaluate how the planet changed in the past.

It’s a departure from many other recent sensitivity studies, according to Mark Zelinka, an atmospheric scientist at Lawrence Livermore National Laboratory and one of the study’s co-authors.

Most papers have focused on individual categories of evidence — for instance, only looking at the Earth’s ancient climate, or only investigating cloud feedbacks.

In an email to E&E News, Zelinka noted that "the various lines of evidence related to climate sensitivity have never really been systematically brought together and analyzed in concert."

That’s critical for a question with so many different factors playing a role, and so many possible ways of investigating them.

This approach has allowed the authors to reduce their uncertainties about the new estimates, Dessler noted.

"What they’ve done here, effectively, is a meta-analysis of all the previous studies," he said. "And then they use a statistical framework to try to take everything that people have published on this and everything we know and try to ask the question: What range of climate sensitivity is consistent with all of the evidence that’s out there?"

And since the new report relies on so many previous studies of climate sensitivity, it’s benefited from years of advancements in scientists’ understanding of the Earth’s climate system.

Clouds, in particular, are helping to close the gaps.

"The primary reason for difficulty in narrowing the range over the years is that we do not know well enough how clouds will respond to warming," said Zelinka. "We have made a lot of progress on this recently, and this has contributed to narrowing the range."

The new report devotes a large chunk of its analysis exclusively to clouds. It examines the growing body of science on how different types of clouds respond to climate change, and how changes in these clouds may affect future climate change.

The mounting evidence suggests that clouds are unlikely to mitigate climate change on a global scale, the report concludes. On the contrary, they’re more likely to make it worse.

With a new, more confident sensitivity estimate in hand, the report begs the question: What does this mean for future climate policy?

On the one hand, the study strikes a blow to a favorite argument used by climate deniers: The uncertainty about climate sensitivity suggests future warming might not actually be that severe.

The new report strongly suggests that the best-case sensitivity scenarios — those at the lower end of the old ranges — are probably not in the cards.

Still, the revised range doesn’t change much when it comes to the international climate goals outlined by the Paris Agreement. Nations worldwide are striving to keep global temperatures within 2 C of their preindustrial levels.

To reach that target, world leaders would have to ensure global CO2 concentrations never double at all.

"It’s not clear to me how much we would gain from further decreases in the uncertainty" of this metric, Dessler said. "What this has done, in my opinion, is it’s really moved the game away from these questions about the physics of the climate system into questions about how are humans going to react to climate change."