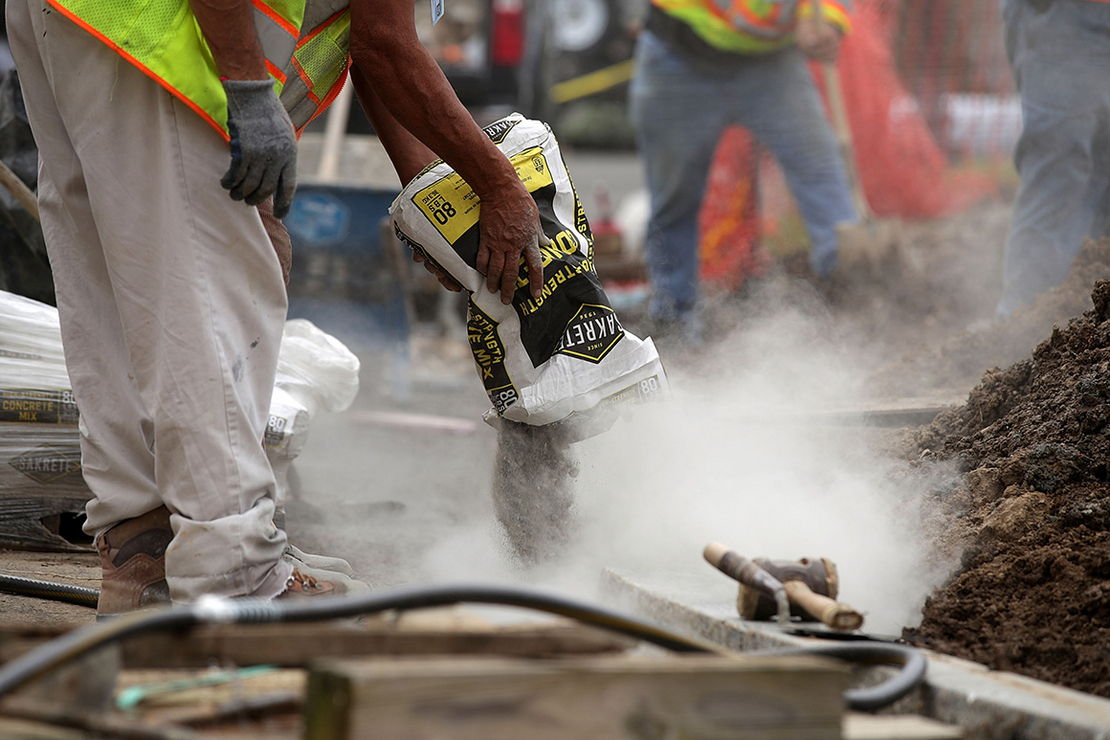 Workers pour concrete as they install a granite curb in 2017 near the West Wing of the White House. Alex Wong/Getty Images

The procurement arm of the federal government is imposing new limitations on high carbon-emitting building materials for all its major projects, a move that will affect billions of dollars of federal infrastructure investments.

The new General Services Administration standards — to be released this morning — will require that federal contractors use climate-friendly concrete and asphalt in all the agency’s major projects. GSA oversees $75 billion in annual contracts, and the agency’s real estate portfolio comprises more than 370 million square feet.

The standards also will govern projects funded through the bipartisan infrastructure bill President Biden signed into law last year, including $3.4 billion to modernize 26 land ports of entry along the U.S. borders with Canada and Mexico.

“GSA is excited to deploy these groundbreaking standards as part of this administration’s all-hands-on-deck effort to catalyze clean energy innovation and strengthen American leadership on clean manufacturing,” GSA Administrator Robin Carnahan said in a statement.

The industrial sector is a major source of greenhouse gas emissions. Concrete, steel and aluminum account for 23 percent of total global emissions. And asphalt — which traps and emits heat — exacerbates rising temperatures, particularly in urban areas.

Concrete has a massive carbon footprint due to its use of cement, which binds and fortifies the popular building material. For every ton of cement made, a ton or more of CO2 is released, accounting for at least 8 percent of global emissions. The United States produces about 500 million tons of concrete each year.

To address this climate pollution, GSA will require that all potential contractors delineate the greenhouse gas emissions associated with their building materials, providing environmental product declarations. Carbon emitted from a product’s extraction, transportation and manufacturing will be considered.

GSA only will contract with companies whose total emissions are 20 percent lower than the national limits recommended by the New Buildings Institute, which outlines modern building codes.

Asphalt, which covers more than 40 percent of American cities, absorbs and emits heat. This can increase surrounding air temperatures by as much as 7 degrees Fahrenheit, according to the Massachusetts Institute of Technology’s Environmental Solutions Initiative. A recent study, published in the journal Science Advances, found that when asphalt is hit with solar radiation, it can release up to 300 percent more emissions.

The United States produces 420 million tons of asphalt each year, which is used to pave more than 90 percent of the country’s roads.

GSA now will require that its contractors provide at least two out of six environmentally preferable techniques the agency recommends when making and installing the asphalt, such as using bio-based binders and recycled materials. Another technique utilizes a glaze that allows sunlight to reflect off the asphalt instead of being absorbed.

The agency did not specify the extent to which the new standards are expected to reduce the federal government’s carbon footprint.

In crafting the standards, GSA solicited feedback from industry stakeholders through two requests for information. The agency said the majority of concrete manufacturers reported already producing or supplying low-carbon materials, and a little more than half said such concrete costs about the same as conventional equivalents.

The bulk of asphalt producers likewise reported using recycled materials in their pavement products. Half also said environmentally preferable asphalt costs about the same or less than the industry standard.