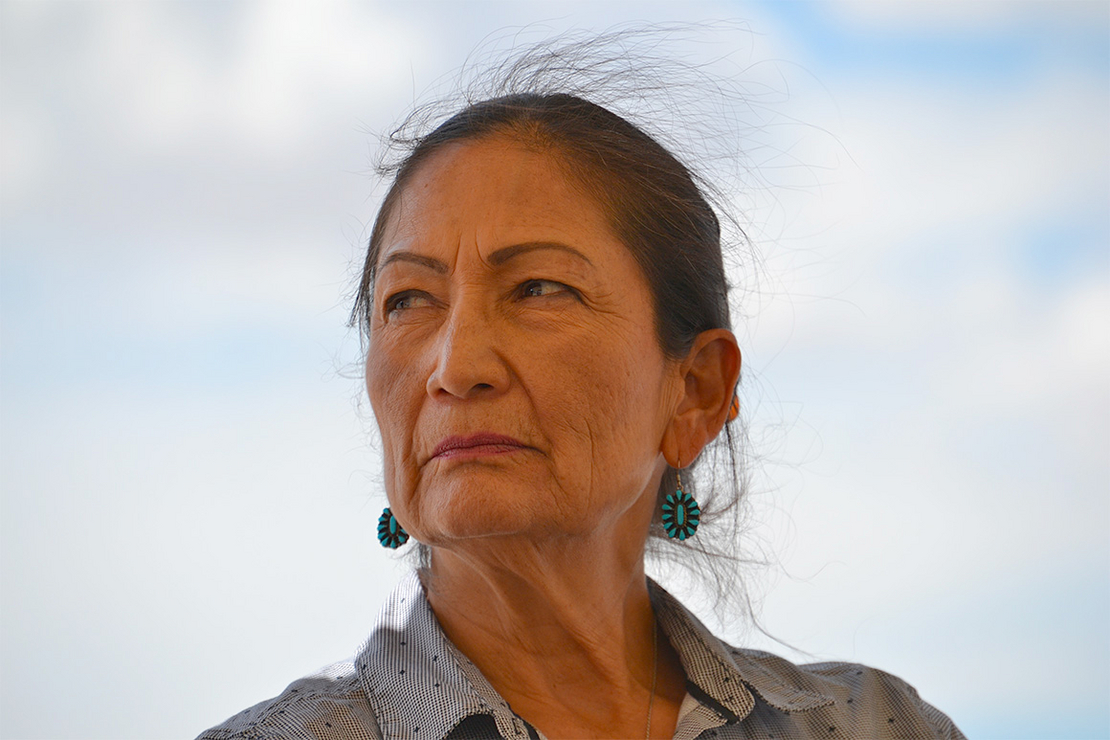 KIRTLAND, N.M. — Interior Secretary Deb Haaland stepped gingerly here on a Thursday in late August as she emerged from the black SUV that carried her down a long, dusty dirt road for a pop-up press conference in the middle of the desert.

Haaland, 61, who broke her leg hiking in Shenandoah National Park in July, pointed to a brace on her left leg to Deputy Energy Secretary David Turk, who took a seat beside her on a small stage and inquired about her injury.

Organizers had assembled a tent with a stage and a sound system at the site of a planned solar power facility within view of a hulking coal-fired power plant that’s slated to be shuttered this month. Trays of carefully arranged fruit and dip were spread out on tables.

“This is the nicest press conference I have ever been to, so thank you, whoever organized this,” she said. “It’s off the charts! In the middle of the desert in New Mexico.”

She had ditched the orthopedic boot she’s been wearing lately and donned a pair of red sneakers more suitable for the rugged terrain.

The broken fibula has slowed Haaland, a runner who completed the Boston Marathon last year in a respectable 4 hours and 58 minutes.

The Interior Department has declined to comment further about how Haaland broke her leg. “We do not expect to issue any further details,” her communications director Melissa Schwartz told E&E News in a July email. Schwartz said this week that “her injury, which occurred outside of business hours and while she was in her personal capacity, was announced in a press release.”

Haaland’s comments to Turk about her recovery weren’t audible to a reporter seated in the front row of the press conference.

The Interior secretary — now 18 months into her tenure — isn’t a fixture on cable news like some of her colleagues, including Transportation Secretary Pete Buttigieg and Energy Secretary Jennifer Granholm.

Under Haaland’s leadership, Schwartz said, Interior has “intentionally sought to diversify our media engagement across the Department and specifically with the Secretary to give opportunities to reporters and outlets — and thus audiences — who have been typically ignored.” Schwartz added that Haaland has given more than 100 one-on-one interviews since taking office, including 62 percent with reporters who identify as women and 45 percent with reporters of color. Most of those, Schwartz said, have been conducted with national media outlets.

“The Secretary of the Interior has the enormous responsibility of being the Department’s biggest cheerleader and advocate, both in the press and with elected officials,” said a former senior official at the Obama Interior Department who requested anonymity to protect professional relationships.

“Whether it’s because her team is being overly cautious or she simply doesn’t yet feel comfortable in the limelight, she probably needs to be a little bolder when it comes to representing the Department since she’s competing with others in the Cabinet who attract much more attention,” that person said.

Haaland’s office declined to make her available for a brief interview at her event in New Mexico last month, citing a “tight schedule and group traveling.”

‘So happy to be here’

The Interior secretary wasn’t in New Mexico to schmooze with reporters on the sidelines.

She was back in her home state — joined by other senior Biden administration officials — to take a victory lap after Democrats eked out the biggest climate and renewable energy bill in history.

Administration officials are canvassing the country to boast about their legislative victories under Biden’s watch. Democrats are hoping to convince voters that there’s more where that came from if they can hold onto both chambers of Congress in this fall’s midterm elections.

Haaland beamed when she stepped up to the podium, which was a little too tall for her.

“Twenty years ago, I would have scratched my head and said, ‘No, I don’t think that would happen.’ But anyway, I’m so happy to be here!” she told the small crowd assembled in the desert.

Twenty years ago, Haaland was a single mother of a young daughter and was struggling to make ends meet. She hadn’t yet gone to law school or launched her political career. She and her daughter often had to sleep at the house of a friend because Haaland couldn’t afford an apartment, she told Roll Call in 2019.

“That is a biography that enabled her to relate to many people in New Mexico, rather than being someone born with a silver spoon or someone who’s more from the elite political class,” Sanderoff said.

The trappings that come with her new gig — the sleek black SUV, the security detail and the staff entourage she travels with — mark a drastic change. Even in 2014, when she was running to be lieutenant governor, Haaland drove around in a Honda Civic packed with fliers and signs, the Albuquerque Journal reported.

Haaland lost that race. But since then, she’s been steadily climbing the political ranks. She manages a department of about 70,000 employees and she’s No. 8 in the presidential line of succession.

Haaland was elected chair of New Mexico’s Democratic Party in 2015, won her congressional seat in 2018 and reelection in 2020 and was sworn in as Biden’s Interior secretary in 2021. She made history in all of those roles as the first or one of the first Native Americans to serve in those positions.

It’s plausible that she could run for statewide office someday, Sanderoff said. Democrats currently occupy both of New Mexico’s U.S. Senate seats and the Democratic governor, Michelle Lujan Grisham, is running this fall for another four-year term.

“You never know what opportunities arise,” Sanderoff said. Haaland, he added, “has the potential to do well in New Mexico for future office whether it be state or federal positions.”

Her rapid ascent is no surprise to her allies.

“She’s really smart, and she is very dedicated. She works; she’s a hard worker,” said Fred Harris, a former U.S. senator from Oklahoma who became a professor at the University of New Mexico in the 1970s. Haaland, who graduated with an English degree in 1994, was one of his students.

Haaland worked as a baker to get through school, Harris said.

She was drawn into politics in large part by a desire to put a Native American voice in the room where decisions are made, said Harris and his wife, former New Mexico Democratic Party chair Margaret Elliston.

“Her slogan when she was running for Congress was, ‘They’ve never heard a voice like mine,’” Elliston said. “I think that was a great motivator.”

Haaland got emotional during an interview with CBS’ Norah O’Donnell in April 2021 about the historical nature of her role as the first Native American Cabinet secretary.

“You don’t know what this means to Indian Country,” Haaland recalled telling Biden when he offered her the job. “It’s significant, it’s historical, it’s meaningful,” she told O’Donnell. “We’re all indebted to him.”

The issues Haaland’s department deals with are personal to her — and she’s proud to be in a position to change Interior’s policies.

The Interior secretary, whose grandparents were forced into government-run boarding schools for Native Americans, is now leading a probe into the dark history of Indigenous boarding schools. Many of those schools were run by Interior (Greenwire, May 11).

One of her first moves on the job was to announce the formation last year of a new Missing and Murdered Unit at Interior to prioritize missing and murdered American Indians and Alaska Natives, an issue that Haaland also championed on Capitol Hill (Greenwire, April 2, 2021).

At the press conference in New Mexico, she announced that federal funds would go toward plugging abandoned oil and gas wells that can leak harmful chemicals into Native American communities like her own.

“Those of us from New Mexico are all too familiar with the legacy pollution,” she said.

“I come from a community — Laguna Pueblo — that suffers from the impacts of environmental injustice. Our health, our water, our elders continue to feel the devastating consequences of the nation’s largest open-pit uranium mine, even though that mine was closed over 40 years ago.”

For now, the Interior secretary is riding high from the administration’s recent string of legislative successes. But the outcome of the midterm elections in November could change her life dramatically.

A GOP takeover of either chamber of Congress could force her and her staff into a defensive posture. Republicans holding gavels and subpoena power could compel her to hand over documents and show up for regular oversight hearings.

Republicans have been critical of her tenure so far, particularly as it pertains to the Biden administration’s oil and gas policies on public lands.

“Your department, Madame Secretary, stalls, postpones and kills oil and natural gas lease sales. Your department is undermining domestic energy production, not expediting it,” Wyoming Sen. John Barrasso, the top Republican on the Senate Energy and Natural Resources Committee, told Haaland during a hearing in May.

Rep. Yvette Herrell, another New Mexican and the top Republican on the House Oversight and Reform Subcommittee on Environment, also wants Haaland to answer for the Biden administration’s energy policies.

“I would have hoped that she would have been more proactive in helping our energy producers, especially those from her own state, jump this hurdle of … discrimination from an administration that has gone out and attacked the industry as a whole,” Herrell told E&E News in a recent interview.

John Leshy, who served as Interior’s solicitor during the Clinton administration, thinks Haaland and the Interior Department might not bear the brunt of Republicans’ ire if they win the House or the Senate this fall. Interior issues are “potentially hot button,” Leshy said, but they’re also “quite complicated, scientifically and politically,” which might make it tougher to “stir up political interest” in them.

But, Leshy added, there’s no doubt that a GOP takeover in Congress would bring “a lot of attempts for harassment to throw them off balance and get them off their game” at Interior and across the Biden administration.

For now, Haaland is continuing her travels out West. She visited public lands in the Mojave Desert this week that advocates are pushing the Biden administration to designate as a national monument (E&ENews PM, Sept. 7).

Her leg appears to be recovering; a photo she posted on Twitter at the event shows no sign of the boot.