Hard questions for Pruitt in city ‘bombarded by lead’ 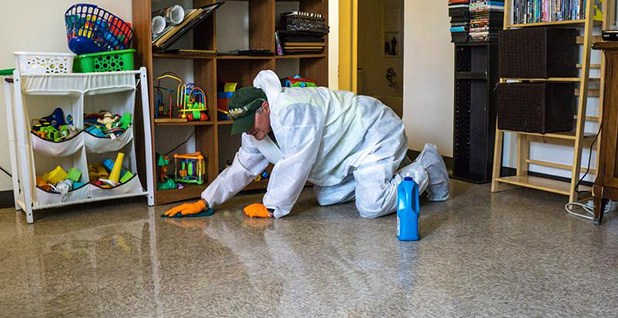 U.S. EPA Administrator Scott Pruitt’s "Back-to-Basics" tour will touch down tomorrow in East Chicago, Ind., an industrial city in the throes of a lead-contamination crisis.

Pruitt’s visit to East Chicago offers a chance to address concerns about how EPA will handle pollution in poor communities and to hear from residents worried about the pace and transparency of the cleanup of lead contamination.

East Chicago is a "textbook example of an environmental justice low-income community of color," said Mark Templeton, an associate professor at the University of Chicago Law School who represents local residents in a court battle over the cleanup of the USS Lead Superfund site.

"I would say that I am seriously concerned about the ability of EPA as well as the states to be able to fulfill their responsibilities with the proposed budget cuts," he said.

In East Chicago — which has drawn comparisons to Flint, Mich., where thousands of people were drinking lead-laced tap water — the USS Lead Superfund site is a knot of complex lead contamination and legal problems.

The USS Lead smelter produced lead for a variety of uses, beginning in 1920, and then in the early 1970s was converted into a site for recycling scrap metal and batteries.

A few blocks north of the 79-acre tract, another facility, owned by Anaconda Lead Products, also refined lead — though it had a shorter history and was shut down in the 1930s.

When USS Lead ceased operations in 1985, both EPA and the Indiana Department of Environmental Management found high levels of lead in soil linked to USS Lead’s operations. In 2009, the site was added to the list of the nation’s worst contaminated sites.

Under a 2014 consent decree, Atlantic Richfield Co. and DuPont agreed to pay for cleaning up two "zones" at the site: a public housing complex built in the 1970s on the site of the Anaconda refinery and an area of private homes. In all, the Superfund site contains 322 acres of residential area.

EPA did an initial round of soil testing when the site was added to the Superfund list and tested the soil again in November 2014. But the area didn’t garner national attention until this past summer, when the agency shared sampling results from East Chicago showing that the public housing complex contained high levels of pervasive lead contamination.

The contamination was so bad that East Chicago Mayor Anthony Copeland ordered that a local school be closed and that more than 300 families evacuate so that the public housing complex could be torn down.

"We devoted staff and resources to this problem, and arrived at the difficult conclusion that relocation, followed by demolition was the best way to protect people," Copeland said in a public letter explaining the decision.

Shortly after, EPA began sending letters to residents living in private homes in the area that their soil also contained dangerous levels of lead and would need to be cleaned.

"For the first time, residents really understood how contaminated their properties were," said Debbie Chizewer, a fellow at Northwestern Pritzker School of Law’s Bluhm Legal Clinic who is representing the residents at the site.

In the months since the mayor’s decision to close the complex, EPA announced that it had reached an agreement with Atlantic Richfield and DuPont to fund another $16 million worth of cleanup activities in Zones 2 and 3 of the Superfund site, which both contain private residences. The agency recently resumed removing contaminated soil from houses in Zone 2 and plans to begin removal at Zone 3 on May 1.

The majority of the public housing complex’s residents have moved out, many of them under the terms of a settlement negotiated by the Chicago-based Sargent Shriver National Center on Poverty Law. But some residents are still in the complex, after protesting the East Chicago Housing Authority’s decision to send them to temporary locations.

The area’s problems with lead contamination extend beyond the soil.

In December, EPA released the results of a pilot drinking water study in which it tested the water at homes before and after soil remediation. The agency wanted to see whether excavation activities would create a hazard by disturbing lead pipes.

Of the 43 homes tested, 18 had actionable amounts of lead — above 15 parts per billion — in the water before remediation even began. Three homes had samples measuring greater than 81 ppb.

The agency concluded that the contamination arose from the amount of lead in the city’s pipes and insufficient phosphate levels in drinking water. It referred the problem back to the city and the Indiana Department of Environmental Management.

In February, Gov. Eric Holcomb (R) granted a request by East Chicago to declare the city in a state of emergency — a request that was earlier denied by Vice President Mike Pence when he was governor of Indiana. Last week, the Indiana Department of Environmental Management began providing filters to residents who live within the Superfund site.

But NRDC says that East Chicago and the state still lack a clear plan to replace lead service lines throughout the city.

In March, the group filed an emergency petition with EPA under the Safe Drinking Water Act to compel the city and state to address the areas outside of the Superfund site.

"Up to now, it’s only been voluntary measures to try to get filters and bottled water to folks. When we filed the petition, the intent was to light a fire under the city." Geertsma said. "Our main point is that the residents of East Chicago are being bombarded by lead in all directions."

Neither IDEM nor the city of East Chicago responded to a request for comment.

Geertsma said that there has been "a lot of confusion about which agency is handling which aspect of the response."

Over the last several months, residents have also faulted EPA for not being transparent in sharing information about the hazards of the city’s lead contamination. They’ve also complained that EPA lacked urgency in addressing the problem until the mayor’s announcement in the summer prompted citizens groups to start pressuring the agency.

"I think because there’s been attention drawn to this and the community has really stood up and has been advocating for itself, that there has been certainly much more improvement than there would have been without that," Templeton of the University of Chicago said. "But I don’t think any of the residents are satisfied with the pace of it."

Citing concerns about EPA’s handling of the situation last November, a group of residents from the Superfund site filed a motion to intervene in the government’s court complaint that led to the 2014 consent decree.

The motion alleges that the agency failed to inform "and at times has misled" residents about the contamination levels at their property and the threats to their health. The issues with the site, according to the motion, have "created widespread anxiety among the residents."

In December, the federal government urged the U.S. District Court for the Northern District of Indiana to reject the motion, arguing that residents filed too late and that EPA alone has the authority to select the appropriate cleanup plan for the site.

Residents can’t turn to the courts to challenge a Superfund cleanup as it happens, the Justice Department said in a court filing.

"The system is working, and EPA is diligently proceeding to clean the site and protect residents," the government court filing said.

The motion to intervene is still pending, and EPA told E&E News in an email exchange that it is still reviewing the drinking water petition.

In the same email, EPA said that it has included input from residents in its cleanup decisions at the site.

"EPA frequently meets with area residents and community members of the various local community groups," the agency said. "For example, EPA conducted dust testing in basements as a result of hearing residents’ concerns about flooding."

Pruitt is visiting tomorrow at the invitation of Holcomb and several of the state’s lawmakers.

Sens. Todd Young (R-Ind.) and Joe Donnelly (D-Ind.) both have raised concerns about the fate of the Superfund cleanup (E&E News PM, April 5).

Secretary of Housing and Urban Development Ben Carson has also said that he would visit East Chicago, but a date has not yet been set.

In a recent statement announcing the $16 million in funding, Pruitt called protecting the well-being of people who live at the Superfund site "crucial."

"EPA is accelerating the cleanup to keep residents safe in their homes and neighborhoods," the administrator said.

Pruitt has also said that he wants to make cleaning up Superfund sites a priority at EPA.

Advocates for the East Chicago residents are hoping that the administrator will use tomorrow’s visit to announce the approval of the Safe Drinking Water Act petition and commit to working with residents to complete the rest of the Superfund cleanup.

But environmentalists fear that larger changes at EPA — including the Trump administration’s proposed 31 percent budget cut for the agency — will mean that environmental justice communities like East Chicago won’t get the resources they need from the federal government.

While it’s unclear whether the Congress will enact those proposals or pass more limited cuts to EPA’s budget, certain agency programs are likely to be axed, and enforcement dollars will likely be decreased.

Advocates are also worried that state agencies won’t be able to fill the gaps because of their own budget difficulties.

"These communities need extra attention," said Kim Ferraro, a senior staff attorney at the Hoosier Environmental Council. "It’s not enough for a regulatory agency like EPA to just treat them the same as any other community. They’re not the same."

Under the prior administration, EPA released four-year strategies for incorporating environmental justice into the agency’s work and partnered with local communities.

EPA also created an online tool to screen for communities that may be facing environmental justice issues.

And in the final weeks of the Obama administration and in response to East Chicago’s situation, EPA and the Department of Housing and Urban Development signed a memorandum of understanding agreeing to more fully investigate issues related to the contamination of public housing sites.

"Those were all positive developments, but so much needed to be done to fulfill the promise of those documents and partnerships," Chizewer said. "By not funding that part of the work, it will necessarily fall by the wayside, and the communities that are most contaminated and have residents in low-income communities of color will be harmed by that."

Advocates say they want East Chicago and Flint, Mich., where water became contaminated with lead when a state-appointed city manager switched drinking water sources, to serve as lessons for how to approach pollution problems in other environmental justice communities around the country.

"It had to be a disaster for their voices to be heard," Ferraro said. "That shouldn’t be the case. These communities need consistent focus and help."