Hardship binds flood survivors: ‘All we have is each other’ 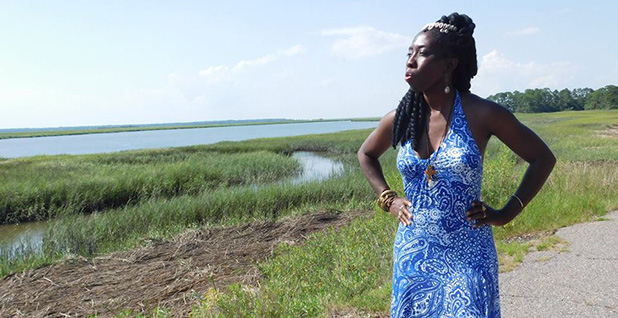 As many as 60 participants in the Anthropocene Alliance’s Higher Ground coalition — representing small, Indigenous, disadvantaged and forgotten communities across the United States — converge via Zoom twice a month to share stories about flood recovery and resilience.

Some vent. Some cry. Some pray. All share a common condition.

Water keeps inundating their homes and streets, and they have little means or muscle to stop it. Elected officials shrug at them, regulators put them off, mainline environmental groups are too busy or want bigger "case study communities" to represent broader policy agendas.

"All we have is each other, and sometimes that has to be enough," Harriet Festing, co-founder of the alliance, said last week from her home in Micanopy, Fla., about 12 miles south of Gainesville. The town of about 540 people received a foot of rainfall from Hurricane Irma in 2017, enough to fill the Alachua Sink.

Micro-level advocacy, like that provided via the Anthropocene Alliance, is helping chronically flooded communities and neighborhoods — urban and rural — raise their profiles among often distracted national policymakers and influencers. Many can’t muster the financial or political clout on their own to make their voices heard in city halls, state capitols or federal agencies.

Two Higher Ground members recently broke through the din. Their communities — and their local waterways — were named to the 2021 list of "America’s Most Endangered Rivers" list compiled by the nonprofit American Rivers. Others have received pro bono legal representation or landed meetings with members of Congress to plea for help.

But most of the heavy lifting comes from the bottom up as Higher Ground members realize their shared experiences, challenges and opportunities can’t wait for outside attention.

"Two-thirds of our membership are just loose groups of residents who came together over a problem they can’t solve by themselves," said Festing, a British ex-pat who began her environmental advocacy career helping Chicago’s flood-prone neighborhoods. "We haven’t found a particularly systematic way of doing this. We find them, they find us."

‘The language of flood survivors’

Queen Quet was among those found by Festing.

As chieftess of the South Atlantic Coast’s Gullah/Geechee Nation, whose members are descendants of West African slaves, Queen Quet (born Marquetta Goodwine on St. Helena Island, S.C.) is working to save the islands her people have inhabited for more than two centuries and share a common Creole language and deep cultural ties to what’s regionally known as the "low country."

In an interview, Goodwine said the Higher Ground coalition’s name "spoke to me spiritually and culturally before it spoke to me intellectually." She described its members as a support group designed to "amplify" each other’s causes and concerns. "We don’t necessarily share the same language, except we all speak the language of flood survivors," she said.

While principally a grassroots movement, Higher Ground and similar efforts also lay bare an uncomfortable truth about U.S. disaster policy: that a disproportionate amount of public and private money for flood resilience goes to wealthy and well-connected communities already ahead on the climate adaptation curve and can more easily harness political and financial aid.

"Many non-white households living near the coasts, particularly in the African American South and big cities, haven’t received sufficient flood investment protection and don’t have flood insurance," the analysis found.

Thousands of communities meet that definition, and Festing said the alliance will expand its focus beyond flooding as climate disasters grow in number and type. The group’s roughly 70 members, currently representing 22 states, expect to grow to more than 100 by the end of 2021 as the United States experiences more "multiple, unnatural disasters … all compounded by reckless development and climate change."

Of the current members, nearly two-thirds represent what are termed "underserved communities," and 80% are led by women, according to the alliance.

Equity and justice are at the heart of efforts by two Higher Ground members and hyperlocal nonprofit organizations that managed to push their causes into the national spotlight via the 2021 "America’s Most Endangered Rivers" list.

Turkey Creek, a 13-mile tributary of Bayou Bernard in coastal Mississippi, is championed by the Education, Economics, Environmental, Climate and Health Organization (EEECHO) in Gulfport.

Development pressure surged along Turkey Creek after Hurricane Katrina in 2005, Egland said, resulting in an explosion of commercial buildings, parking lots and other impervious surfaces on top of what used to be forest and wetlands. EEECHO has been fighting off development proposals ever since, including a military port facility to be built on top of an abandoned fertilizer factory.

"These threats don’t stop. We’re in the middle of one fight and another one comes up," she said. The Anthropocene Alliance, alongside other Higher Ground coalition members, have provided EEECHO with essential resources and encouragement to stay engaged.

"The exchange of information and ideas is absolutely invaluable," she said.

More than 700 miles away in Ottawa County, Okla., Tar Creek passes through the small city of Miami in the state’s northeast corner, including tribal lands owned by the Cherokee, Miami, Peoria, Ottawa, Quapaw and Eastern Shawnee tribes.

It is also the primary drainage of one the nation’s oldest federal Superfund sites, a place poisoned by metals leaching from 20th-century lead and zinc mines. EPA put Tar Creek on its National Priorities List in 1983 and in 2017 added it to a list of Superfund sites needing "immediate, intense action."

But the region’s nightmare is getting worse as floods caused by extreme rainfall happen more often, sending torrents of polluted stormwater across streets and yards. Flooding could be made even worse by downstream property owners seeking to hold more water in Tar Creek’s receiving basin, Grand Lake o’ the Cherokees, to improve conditions for fishing and recreation.

Anna Weber, a policy analyst and flood protection expert with the Natural Resources Defense Council who has worked with the Anthropocene Alliance, said hyperlocal organizations bring a unique set of problem-solving strategies to climate risk that could shape the way large organizations like hers operate.

"NRDC is a large and federally focused organization. We have different types of strategies and resources than small community-based organizations," Weber said.

But for environmental justice to become a policy priority in Washington, national organizations will need to expand their missions and priorities.

"I think that’s something that NRDC and other large organizations have really started to grapple with recently," she said. "We need to be forming true partnerships with local organizations so that our work is not just transactional, but transformative. That takes a lot of time and a lot of work, and it can’t be done in the 24 hours before a congressional hearing."

Festing agreed. "Flooding has become such a massive problem that a lot of environmental organizations have decided to deal with the massiveness of it at a massive scale," she said. "They’re disconnected from the people who are feeling these things day to day.

"But there’s no correlation between being well-regarded and effective and being a large organization with lots of money," she added. "It’s rather shocking that the groups who do this extraordinary work often have no money behind them."