Here’s how OSHA is protecting workers from heat this summer 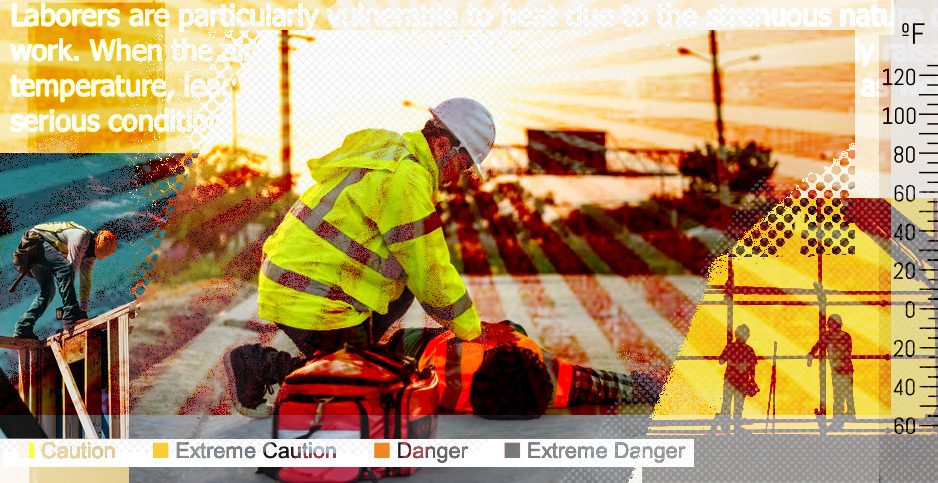 As temperatures rise this summer, employers across the nation are on notice: For the first time ever, federal inspectors could stop by unannounced to ensure workers are safe from heat exposure.

That’s thanks to the Occupational Safety and Health Administration’s “National Emphasis Program” for heat. Under the program, OSHA inspectors will target workplaces in more than 70 industries at “high risk” for heat exposure — such as agriculture, warehouses and construction — whenever the National Weather Service announces heat warnings or advisories for the area where the business is located.

Such emphasis programs are an important enforcement tool for OSHA because they allow inspectors who are otherwise limited to only visiting workplaces after they have received complaints or after workers are killed or injured to visit workplaces and inspect for hazards before anyone gets hurt.

“We want to be proactively addressing heat hazards,” OSHA Deputy Assistant Secretary Jim Frederick said in an interview. “Without an emphasis program, we can see a hazard and address it if we are already in a workplace, but this gives us the ability to proactively go to these workplaces and see what heat protections they have in place.”

The program also means that when inspectors visit job sites for complaints about other hazards, they will also be directed to assess whether workers there are being protected and safe from high heat, as well.

Though emphasis programs themselves are nothing new for OSHA, this is the first program for heat, which can be extremely dangerous. High heat and humidity can cause dehydration and even heat stroke, which can be fatal. They can also cause kidney damage and exacerbate preexisting respiratory and cardiac conditions.

While everyone is at risk from heat illnesses when temperatures rise, laborers are particularly vulnerable because the exertional nature of their work makes it more difficult for their bodies to cool down.

That means having a national emphasis program for heat could save lives, said Jordan Barab, who was OSHA’s deputy assistant secretary of Labor for occupational safety and health during the Obama administration.

“It shows we are watching, we are looking, and we may be visiting a workplace near you, so do what you can before OSHA gets there to protect your workers from high heat exposure,” he said.

The emphasis program is part of the Biden administration’s broader efforts to address the effects of climate change using a “whole of government” approach. The administration announced its intention to create an emphasis program last September, and Vice President Kamala Harris headlined an April event officially kicking off the program at the Sheet Metal Workers Local 19 union in Philadelphia.

“Let’s be clear: Heat is a workplace safety issue,” she said to applause. “And employers are responsible for protecting their workers in the workplace from the dangers of heat, including in farm fields, in delivery vans, and in nursing homes — everywhere that has workers.”

The emphasis program won’t start out as an enforcement tool right away. Rather, for the first few months, OSHA compliance officers will merely consult with employers, visiting work sites and explaining what needs to be done to make it safe. Formal inspections that could result in citations for violations will begin later.

OSHA has already begun those consultations, with Department of Labor Secretary Marty Walsh traveling to Alabama in May to observe a consultation at a local water system.

After the visit, Spanish Fort Water System Superintendent Jason Evans shared his experiences in a Department of Labor blogpost, saying he asked for a consultation because high heat and humidity at the end of summer mean “even with rapid hydration and frequent breaks, it can feel like you are trying to cross the Sahara Desert with no water.”

He said the consultation has increased employee safety “by encouraging employees to stop and ask, ‘Is there a better and safer way to accomplish my job or task?'”

“Our greatest goal is to ensure all employees have the safest workplace possible,” he said.

Labor advocates agree that the program is a step up for OSHA.

Juley Fulcher, a worker health and safety advocate at Public Citizen, said the program could be “a very good thing,” especially because OSHA often does not investigate all heat-related complaints it receives, often only visiting worksites where workers have died or become seriously ill.

But she also suggested that there is a limit to how big of an impact the emphasis program can have without specific standards telling employers exactly what they need to do to protect workers from heat.

Indeed, OSHA has no heat regulations. Though the agency is currently working on writing such a standard, an actual proposed rule is years away. In the meantime, OSHA must rely on its “general duty clause,” which broadly requires employers to ensure workplaces are safe from “recognized hazards.”

The agency has had trouble trying to issue citations for heat hazards based solely on its general duty clause. In 2019, OSHA’s agency review commission hamstrung its use of that authority, questioning whether there could be a “general duty” to protect workers from something like heat that impacts people differently depending on factors like age, underlying health conditions and type of work being done.

“There is such a high burden to issue a heat citation under the general duty clause now that they can only do anything with the most extreme cases,” Fulcher said. “That’s why a heat rule would be so important, because when you cite someone you could say, ‘Here it is, written on paper, here is what you had to do that you didn’t do.’”

Elizabeth Strater, director of alternative organizing at the United Farm Workers, agreed that the emphasis program would carry more weight if heat standards were in place.

“We need rules to hold employers accountable because we know that these deaths are all preventable,” she said.

But, he said, the emphasis program would have benefits beyond just enforcement, because it allows OSHA inspectors into workplaces where they can have real conversations with workers about heat.

High heat risk industries like agriculture and construction often rely on workers who are disproportionately people of color or immigrants, which can make them more likely to fear retribution if they speak out about dangerous working conditions.

The emphasis program, Frederick said, “is a tool that helps us make certain we are reaching workers we might otherwise not because they might not want to call us and ask for help.”

Both Strater and Fulcher lamented that it could be years before OSHA finalizes a heat regulation, noting that the agency, on average, takes more than seven years to finalize new rules. They think OSHA could be moving faster given that a number of states have recently written their own rules to protect workers from heat and that, over multiple decades, the CDC has made three recommendations to OSHA that it create a regulation (Greenwire, Aug. 6, 2021).

Barab said it’s not so simple, noting that writing a regulation that could apply in multiple climates across multiple industries is a tall order. He noted that the agency’s regulatory budget has been less than $20 million for the past five years and that OSHA currently has prioritized finalizing infectious disease protections given the ongoing coronavirus pandemic.

Not everyone is eager for OSHA to establish new rules quickly. U.S. Chamber of Commerce Vice President for Workplace Policy Marc Freedman said he is not sure OSHA should issue any standard at all.

“We can all agree that heat is a hazard, but trying to say, ‘This is the point at which you are in trouble or where employers have to take action,’ is difficult to nail down,” he said.

Barab disagreed with the idea that heat is too complicated to regulate. He noted that OSHA has rules limiting workers’ exposure to toxic and carcinogenic chemicals even though not all workers who have contact with those materials will get sick.

“Yes, heat is complicated, but that’s not totally unheard of,” he said.

Frederick said the agency is working as fast as it can on the rulemaking, but that progress is hampered by budget constraints. He also said the agency is trying to write a rule that would withstand potential lawsuits, given how often OSHA rules end up in court.

“We can’t just issue a rule and hope nobody has any concerns about it,” he said. “We need to make sure it can match and exceed anyone’s challenges.”