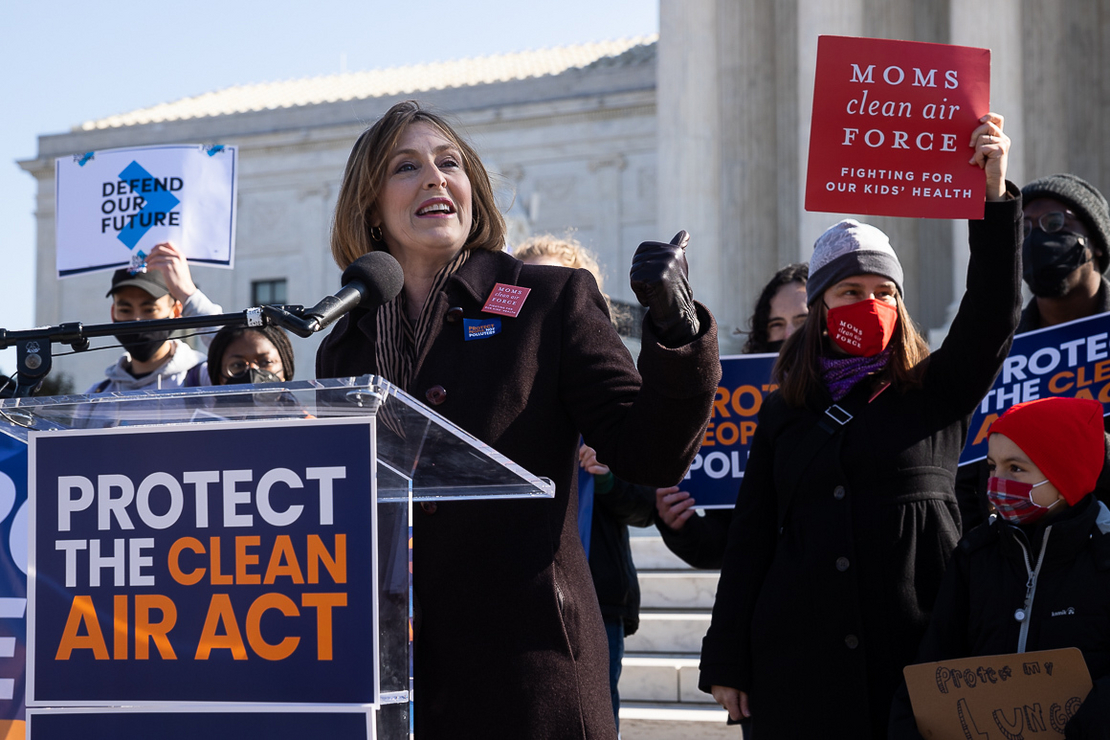 The landmark Clean Air Act case argued before the Supreme Court yesterday could reverberate around Capitol Hill at a critical time for environmentalists and climate advocates.

During arguments yesterday, the justices appeared open to limiting EPA’s authority to require stricter power plant emissions controls — which could be a long-term victory for Republicans and coal states who have long sought to limit the agency’s regulation of greenhouse gas emissions (Greenwire, Feb. 28).

Congress has little immediate power to affect the Supreme Court’s ruling, save for filing legal briefs, but lawmakers are watching closely, bracing for the political ramifications and a new front in the climate fight. With the “Build Back Better Act” and its $550 billion in climate spending on the political back burner, the case could have even greater impacts on the Biden administration’s climate ambitions.

Lawmakers and congressional aides say it may be as important as the yearslong fight over the endangerment finding and Massachusetts v. EPA, the 2007 case that established the agency’s authority to regulate the greenhouse gases warming the planet.

Republican-led states and coal companies last year petitioned the Supreme Court to reverse a ruling by the U.S. Court of Appeals for the District of Columbia Circuit that struck down the Trump-era Affordable Clean Energy rule, which gutted the Obama administration’s Clean Power Plan.

In a move that shocked legal observers, the justices agreed to take up the case, even though the Biden administration said it planned to write a brand-new carbon rule. Solicitor General Elizabeth Prelogar said during arguments yesterday that EPA expects to issue a proposed regulation by the end of the year and could finalize the rule by late 2023.

The Supreme Court is expected to issue its ruling in the West Virginia case by early summer. It could be a crucial decision for the Biden administration’s goal of decarbonizing the power sector by 2035, and Congress is taking notice.

Nearly 200 Democrats signed an amicus brief last month supporting EPA and arguing that Congress gave the agency authority under the Clean Air Act intended to stand over the decades since it became law.

“We need every single tool in the toolbox to help us solve the climate crisis, and that includes the Clean Air Act,” said House Select Committee on the Climate Crisis Chair Kathy Castor (D-Fla.), who led the brief with Energy and Commerce Chair Frank Pallone (D-N.J.) and Senate Environment and Public Works Chair Tom Carper (D-Del.).

Sen. Sheldon Whitehouse (D-R.I.) and three other Democrats filed a separate brief decrying the “reek of politics” at the court, calling the West Virginia case an “industry-driven project” (Greenwire, Dec. 25, 2021).

Republicans argued in their own brief in December that the “economic and political significance” of power sector greenhouse gas regulations make it a matter for Congress to decide explicitly. It was supported by 47 GOP senators and 44 House Republicans.

“That, I think, is an indication of how important this is to us,” Senate EPW Committee ranking member Shelley Moore Capito (R-W.Va), who led the GOP brief with House Energy and Commerce Committee ranking member Cathy McMorris Rodgers (R-Wash.), said in an interview. “And I think what we’re looking at here is a fundamental argument over balance of power.”

‘We need to have a definitive ruling’

It’s been more than 30 years since the last updates to the Clean Air Act, but Congress has repeatedly tried to wade into the battles over EPA authority in the years since Massachusetts v. EPA.

The GOP, joined by some Democrats, launched several efforts during the Obama administration to overturn the endangerment finding that underpins the agency’s greenhouse gas emissions regulations. Sen. Lisa Murkowski (R-Alaska) led one 2010 Congressional Review Act resolution in the Senate, while Capito signed on to a similar effort as a member of the House.

But despite talk from conservatives after the 2016 election, the Trump administration did not toss out the endangerment finding. Instead, President Trump’s EPA issued a new, scaled-back regulation — the Affordable Clean Energy rule — that would have centered on efficiency improvements at individual power plants.

The rule was eventually struck down in court, but at the time, Republicans praised it and showed relatively little appetite for repealing the endangerment finding as a whole (E&E Daily, Aug. 29, 2018).

“I think this is essentially an attempt to undo Mass v. EPA” and the endangerment finding, said Rep. Sean Casten (D-Ill.), who signed the Democratic brief.

“This is really just a backdoor way to try to make another argument to get in,” Casten added.

At issue in the case is Section 111(d) of the Clean Air Act and whether or not it allows EPA to take a broad “outside the fence line” approach to power plant greenhouse emissions.

Some Supreme Court justices have recently indicated an appetite for stronger legislative involvement on issues, like climate change, that are of “vast economic and political significance.”

Red states and coal companies have invoked that doctrine in their case to rein in EPA powers, although some members of the Supreme Court’s conservative wing appeared to question that particular argument.

In their amicus brief, congressional Republicans highlighted recent climate-related laws in an attempt to demonstrate that Congress has provided “explicit and specific direction to administrative agencies” on major greenhouse gas policy questions.

Generally speaking, they wrote, Congress has shown that it prefers carrots, like tax incentives, rather than sticks. The GOP pointed specifically to the bipartisan Furthering Carbon Capture, Utilization, Technology, Underground Storage and Reduced Emissions (FUTURE) Act, which extended the 45Q tax credit for carbon capture.

“This is going to set the course for the next several years,” Capito said. “Obviously, this administration — as the Obama administration was, it’s a lot of the same players — wants to be extremely aggressive here. Some of the people at EPA now are the authors of the Clean Power Plan, so I think the decision will open the door or close the door, and I think we need to have a definitive ruling.”

Capito also worried the coal generation in her state could take a particular hit from any wide-ranging greenhouse gas regulation.

“We have renewables, yes, and that’s a growing sector,” Capito said. “But these would have big impacts in terms of job loss in terms of utility bills, in terms of investments, and so I think those are things that should be left to Congress to decide if they’re going to have this far-reaching impact.”

‘We wouldn’t be able to do anything’

Democrats, in their brief, rejected that line of thinking. For one thing, they wrote, the fact that Congress has chosen a “multifaceted” approach to addressing climate change does not mean EPA cannot also regulate under the Clean Air Act.

They also argued Congress has, in fact, voted to give EPA broad authority over greenhouse gases under Section 111(d). Congress passed a Congressional Review Act resolution last year, largely along partisan lines, that repealed the Trump administration’s methane rule because EPA had taken too narrow a view of 111(d), Democrats wrote.

More worryingly, Democrats said, an application of the major questions doctrine in the West Virginia case could undermine virtually every agency action that relies on a broad mandate from Congress.

“If we had to say that every time we saw a new environmental problem or a problem with clean air or a health problem, that we had to go back to Congress to address it, we wouldn’t be able to do anything,” Pallone told reporters yesterday. “And that is exactly what they’re trying to argue before the Supreme Court.”

Indeed, supporters of broad EPA authority said the agency’s critics have taken too strict a view of how explicitly Congress must speak on an issue in order for an agency to regulate.

“One of the things that’s in danger is the ability of Congress to legislate broadly in anticipation of problems that it knows the general shape of but it can’t foresee in particulars,” said Georgetown law professor Lisa Heinzerling during a discussion last week hosted by Case Western Reserve University.

Still, some legal observers say the question of whether EPA can broadly regulate greenhouse gas emissions from the power sector still rests in the hands of Congress — not the executive branch.

“In the end, it’s Congress,” said Tom Sansonetti, a partner at the law firm Holland & Hart LLP and former head of the Justice Department’s environment division during the George W. Bush administration. “Congress has got to weigh in with a new set of amendments to the Clean Air Act because there is so much uncertainty.”

He added that “we’re in a different world” than when Congress last amended the statute in 1990.

“Why is this case being brought and how did we get to where we are with the case? Because Congress didn’t pass cap and trade, because … the will of the people, which is Congress, did not move forward on this during the Obama administration,” Capito said.

“I think the political reality is, heck yeah, we have to work together on this,” Capito added.

But even if the court decides in favor of West Virginia, it’s not likely to force a major congressional climate reckoning.

Republicans are unlikely to support new power plant regulations any time soon. Sen. Kevin Cramer (R-N.D.), another signatory of the GOP brief, said he only sees it further denting momentum on “Build Back Better.”

“It may give some momentum to their base, it may enrage their base, depending on the outcomes,” Cramer said. “But I think it’s just the opposite in terms of giving them momentum for further federal intervention or legislation from Congress.”

Democrats, for the most part, see “Build Back Better” as the legislative solution in any scenario.

But several also said it raises questions about the very legitimacy of the Supreme Court.

Whitehouse and others have focused for years on how outside groups attempt to influence outcomes in the court, and West Virginia may end up fanning those flames.

“It could [give Congress more incentive to act],” Whitehouse said in an interview. “It could also put a considerable onus on us to take a much closer look at what’s happening at the court and the links between the people who pay to get the justices onto the court and the people who paid to fluff up the doctrines that they’re asking the justices to apply to attack pollution regulations.”