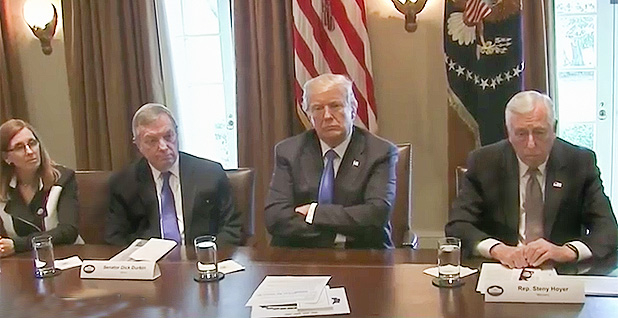 Congress’ appetite for pork may be returning.

The House will hold two days of hearings this week on reviving earmarking, a process that allows members to direct money for favored projects in legislation without regard to merit or other competitive processes.

While talk of bringing back earmarks has built over the past year with the GOP controlling both the White House and Congress, it got its biggest boost last week when President Trump unexpectedly touted the benefits.

"Our system lends itself to not getting things done, and I hear so much about earmarks — the old earmark system — how there was a great friendliness when you had earmarks," Trump said in a meeting with lawmakers. "Maybe all of you should start thinking about going back to a form of earmarks."

The House Rules Committee within days announced it would hold two days of hearings on earmarks tomorrow and Thursday.

The first will be an open session for any members to weigh in, while the second will feature outside groups on "effective oversight and the power of the purse."

The entire House would ultimately have to vote to alter rules. Republican leaders have yet to say whether that could happen this year.

Democrats, by and large, tend to support earmarks, provided they are transparent.

Critics have long derided earmarking as pork barrel spending and warned they drive up deficits. Concerns about corruption, after former Rep. Duke Cunningham (R-Calif.) and high-profile lobbyist Jack Abramoff went to prison in scandals linked to the practice, ultimately led to the ban.

The GOP ended earmarking in 2011 when it won the House, and the Senate followed suit. Ever since, lawmakers have increasingly worried that a lack of earmarks has made it harder to forge compromises.

Earmark supporters in both parties have fretted that Congress has effectively given up power to the executive branch over spending.

Lawmakers’ frustration with the earmark ban bubbled up last week at a hearing meant to kick off work on a water resources development bill.

Sen. Sheldon Whitehouse (D-R.I.) said he was unsatisfied with the process Congress has been using to authorize specific Army Corps of Engineers projects for navigation and flood control.

"I know we have been through a problem of earmarks, which received a lot of justified criticism," said Whitehouse, "but our response was to do away with it totally."

In the most recent water resources reauthorization bill passed in 2016, local project sponsors first submitted proposals to the Army Corps, which then presented a list to Congress requesting authorizations. In the past, members could have earmarked projects without needing any input.

The 2016 process was the brain child of House Transportation and Infrastructure Chairman Bill Shuster (R-Pa.), who is retiring at the end of this year.

The Army Corps’ list leading up to the 2016 bill angered some lawmakers because it included just 19 of the 114 projects local boosters submitted.

Both Whitehouse and Sen. Joni Ernst (R-Iowa) said they were especially concerned with the process the Army Corps uses to determine what projects to champion, with both lawmakers calling the cost-benefit ratio process "a black hole."

Rep. Hal Rogers (R-Ky.), a former Appropriations chairman who only reluctantly backed the ban, said he believes enough time has passed since the scandals.

He said permitting earmarks would help "big time" in moving spending bills, which in recent years have often been delayed.

But Rogers said any revival would come with significant reforms, among them a requirement that any requests come from state or local governments or other public entities.

Also, he said, any earmarks would have to be added by Appropriations subcommittees to spending bills so dollars are not "air dropped" further along in the legislative process.

He said the new term could appeal to conservatives who feel they have given up too much authority to the executive branch.

Still, Cole said, many members still see a stigma around earmarks and may not want to vote to bring them back in an election year.

"It’s nice to at least have the blessing of the president of the United States," he added.

Republicans in both chambers, however, aren’t yet sold that reforms will limit possible earmark abuse.

Rep. Mark Walker (R-N.C.), chairman of the 170-member-plus Republican Study Committee, said he remains opposed because of the "temptation" lawmakers would have to abuse them. But he said he’d at least be willing to listen to reform proposals.

Walker also said reviving them could muddle the president’s message that he is draining the Washington swamp.

Trump should "be careful about allowing the algae-infested waters that actually fill the swamp back up, which I think would be earmarks," he added.

Senate Minority Whip John Cornyn (R-Texas), who opposes earmarks, said he doubts there is support among Senate Republicans for reviving them given "significant corruption" in the past. He said he hopes any talk of their return focuses on the need for major reforms.

Outside groups long opposed to earmarks blasted Republicans for even considering their return.

Citizens Against Government Waste called them "legalized bribery" that trade unneeded spending to win over lawmakers’ support for legislation.

The group also cited studies showing that in the past earmarks have largely been doled out for leaders and appropriators with far fewer going to rank-and-file lawmakers.

The conservative Club for Growth’s President David McIntosh offered one of the strongest warnings last week against reviving them, saying that "if Republicans bring back earmarks, then it virtually guarantees that they will lose the House."