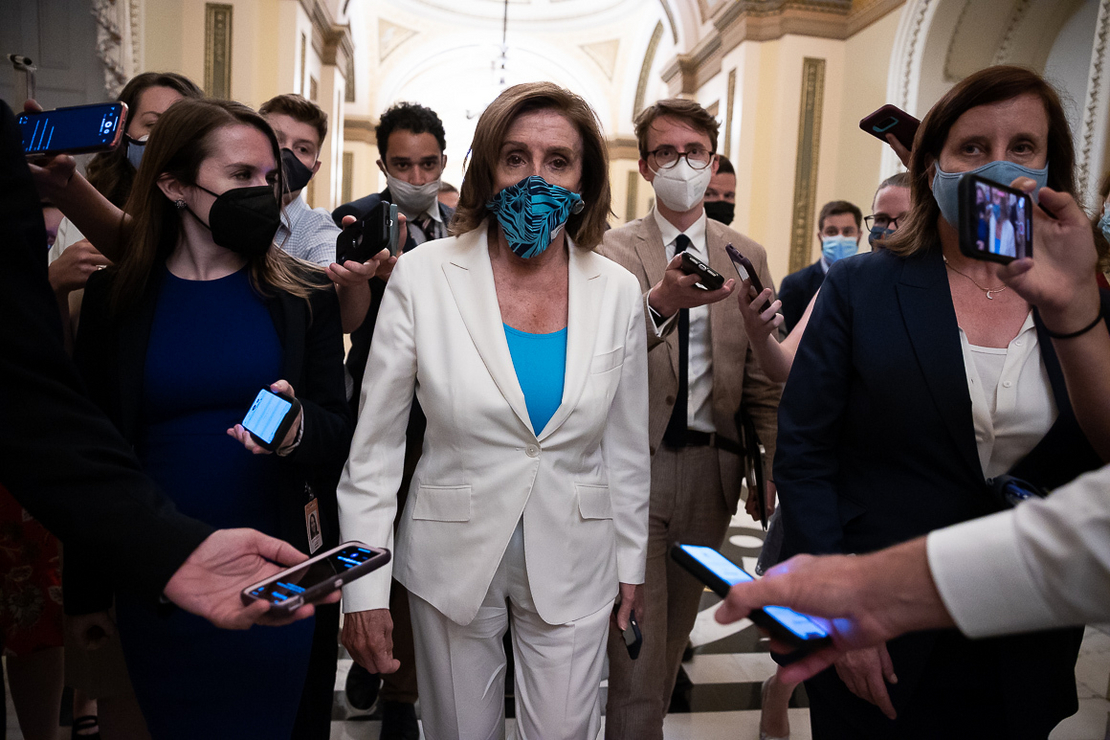 House Democrats face a legislative crunch when they return to town, with concurrent deadlines setting up a mad scramble to write a massive reconciliation package and pass the bipartisan infrastructure bill in a matter of weeks.

House committees will begin marking up their portions of the $3.5 trillion reconciliation package bill next week after lawmakers cleared the budget resolution yesterday, overcoming a dispute between leadership and Democratic moderates (E&E News PM, Aug. 24).

The budget panels on both sides of Capitol Hill are set to assemble the package by mid-September ahead of a potentially contentious vote on the bipartisan infrastructure bill — H.R. 3684 — currently scheduled for Sept. 27 under an agreement struck between moderates and House Speaker Nancy Pelosi (D-Calif.). That’s not to mention the spending bill crunch that will come with the Sept. 30 end to the fiscal year.

At the same time, significant tensions remain about sequencing the bills, pitting moderates against progressives in the House Democratic caucus. That conflict could still derail the entire process. What it all means is that lawmakers will have precious few legislative days to assemble what will likely be the most consequential climate bill in U.S. history.

With the currently scheduled recesses on the congressional calendar, “the most you have is 10 days in September to do all that stuff,” House Budget Chairman John Yarmuth (D-Ky.) said yesterday. “Every committee that I know of is already working,” Yarmuth told reporters.

Despite the positioning of House progressives, who want to see the reconciliation package pass the Senate before they vote on the bipartisan bill, Majority Leader Steny Hoyer (D-Md.) told reporters the order in which the bills receive votes remains an open question.

“We have not got a hard view on sequencing,” he said, adding that “we don’t know exactly when reconciliation will be ready.”

Under the timeline Hoyer laid out yesterday, committees will have the first 2 ½ weeks of September to write and mark up their bills free of floor votes. Pelosi has already instructed the committees to report their bills to the Budget Committee by Sept. 15 to prep the package for the House’s scheduled Sept. 20 return.

That corresponds to the schedule laid out earlier this month by Senate Majority Leader Chuck Schumer (D-N.Y.), who also tasked his committee chairs with being ready with their respective reconciliation bills by Sept. 15, with floor debate to follow as quickly as possible.

Hoyer ticked off several issues that will factor into the legislative calculation, including complying with strict budget reconciliation requirements in the Senate known as the “Byrd rule,” attaining the support of all 50 Democratic senators, as well as the looming Sept. 30 expiration of federal surface transportation programs.

“We expect to pass both those bills by the end of September,” Hoyer said. “We’re working very hard toward that end.”

House lawmakers expect to go first on reconciliation, particularly with the Senate currently scheduled to be out of town until Sept. 13. Committees are already looking to put markups on the calendar.

The House Ways and Means Committee, which will write a massive chunk of the bill and come up with most of the offsets alongside Senate Finance, is eyeing the week of Sept. 6, according to Chair Richard Neal (D-Mass.), who told reporters the markup could go on for “four or five days with a weekend interruption.”

Neal has said he expects to come up with ways to pay for the entire $3.5 trillion bill, a potentially monumental task given President Biden’s pledge not to raise taxes on anyone making less than $400,000 a year. The panel will also be the venue for expansions of clean energy tax credits, a big priority for environmental groups, though with many policy hurdles to overcome.

Specifically, Neal is backing the “Growing Renewable Energy and Efficiency Now (GREEN) Act,” H.R. 848, which would extend and expand key clean energy tax breaks. But Senate Finance Chair Ron Wyden (D-Ore.) has his own long-standing proposal to overhaul the energy tax code, the “Clean Energy for America Act,” S. 1298, which would consolidate incentives into technology-neutral categories for production of clean electricity, transportation fuels and energy efficiency.

Neal said he expects the “GREEN Act” to be the “starting point as we go forward.” Asked about Wyden’s proposal, Neal said “the two of us will be aligned on what we can get and how we can get it.”

The House Natural Resources Committee, meanwhile, has landed on Sept. 2 as its date to mark up its $25.6 million portion of the reconciliation bill, two subcommittee chairs confirmed to E&E News yesterday.

Democratic Reps. Jared Huffman of California, who oversees the Subcommittee on Water, Oceans and Wildlife, and Joe Neguse of Colorado, who presides over the Subcommittee on National Parks, Forests and Public Lands, both said they’re expecting to work through their section of reconciliation next week.

Full Natural Resources Chair Raúl Grijalva (D-Ariz.) has said he doesn’t believe his allocation is nearly enough to address the scope of the climate crisis within the panel’s jurisdiction. Huffman nonetheless predicted the markup would be “pretty straightforward.”

“I think there’s some disappointment in the way those toplines got allocated,” Huffman said. “Everything about this process has been driven by the Senate, largely without a lot of input from us, so yeah, that part of it is frustrating.”

Huffman is pushing for a repeal of language from the 2017 Tax Cuts and Jobs Act that allowed the sale of two leases in the Arctic National Wildlife Refuge, which had long been protected against extraction activities (see related story). Neguse is a champion for expanding funding for the Civilian Climate Corps, a green jobs training program that will receive funding from various accounts in the reconciliation package.

The Energy and Commerce Committee, perhaps the most important panel for climate policy, could see movement soon, as well. E&C, which is responsible for a $486 billion chunk of the package, is expected to draw up the clean electricity payment program, a version of a clean electricity standard Democrats believe can fit into the narrow budget rules that govern reconciliation.

The policy, backed most vocally by Sens. Tina Smith (D-Minn.) and Ben Ray Luján (D-N.M.), would offer direct payments to utilities who deploy clean energy and slap fees on those who do not, with the goal of an 80% clean power sector by 2030. Select Committee on the Climate Crisis Chair Kathy Castor (D-Fla.), who also sits on E&C, said lawmakers are working closely with Smith and Luján.

While Castor acknowledged the policy remains “a work in progress,” she said E&C is doing its own markup prep. “The chiefs of staff got together on a call looking at the timing for mid-September,” Castor said in an interview yesterday.

The bloc of moderates that stalled passage of the budget resolution is signaling it plans to continue to flex its muscles in the closely divided House chamber, but they may run headlong into an equally powerful progressive voting bloc.

Rep. Jim Costa (D-Calif.) said the moderate group of nine told Pelosi that it will stay united as the reconciliation package comes together. “We aren’t going vote on a measure that doesn’t have 51 votes in the Senate,” he said yesterday, dealing a blow to House progressives who want to put their imprint on the reconciliation package but must contend with Senate moderates, including Joe Manchin (D-W.Va.) and Kyrsten Sinema (D-Ariz.).

Both senators have repeatedly raised concerns over the $3.5 trillion price tag of the Senate’s budget resolution. Those fears forced that chamber to scale back the more ambitious and costly plans envisioned by liberals.

Costa also argued that the moderate rebellion forced the “delinking” of the Senate’s bipartisan package and budget reconciliation, which he said the centrist bloc conditionally supports. But several progressives said yesterday that they don’t see the two-track process Democrats have been pursuing as delinked at all.

“The whole thing was a fiasco, to be honest,” Rep. Ilhan Omar (D-Minn.) told reporters. “I really don’t know why they tried to get into something without having an actual goal that they wanted to accomplish. It seems like amateur hour.”

Rather, progressives said the Sept. 27 infrastructure vote — specified in the rule for debate the House passed when it adopted the budget resolution yesterday — is a target date that won’t mean much if reconciliation isn’t wrapped up.

“We have long established that we’re voting on reconciliation and the bipartisan infrastructure plan together,” Rep. Alexandria Ocasio-Cortez (D-N.Y.) told E&E News yesterday. “If we can get that done by the 27, great, but the 27 is not a binding yes vote for me.”

Progressive Caucus Chair Pramila Jayapal (D-Wash.) similarly said the the group’s position “remains unchanged.” The group could easily take down the process if they were to vote in unison.

“We will work to first pass the Build Back Better reconciliation bill so we can deliver these once-in-a-generation, popular, and urgently needed investments to poor and working families, and then pass the infrastructure bill to invest in our roads, bridges, and waterways,” Jayapal said in a statement.

Still, Pelosi said she would commit to “rally House Democratic support” for the infrastructure bill ahead of the scheduled Sept. 27 vote.

“We must keep the 51-vote privilege by passing the budget and work with House and Senate Democrats to reach agreement in order for the House to vote on a Build Back Better Act that will pass the Senate,” Pelosi said in a statement yesterday.