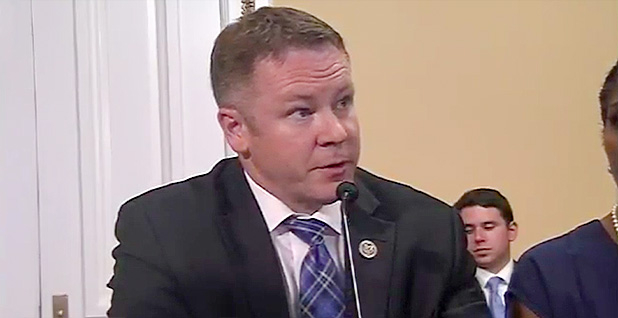 The House Rules Committee last night made in order more than 120 additional amendments to the National Defense Authorization Act bill ahead of continued floor debate today, including one on climate.

Last month the Armed Services Committee approved language from Rep. Jim Langevin (D-R.I.) that recognized global warming as a threat to military installations and national security. But lawmakers will debate the issue again when the full House takes up an amendment from Rep. Scott Perry (R-Pa.) proposing to scrap the Langevin rider.

The Rules panel, however, blocked other climate-related amendments, including one from Rep. Warren Davidson (R-Ohio) to roll back Obama-era policies on global warming and the military.

It would have prohibited the Department of Defense from continuing to implement a 2015 executive order that requires the agency to meet green energy quotas and examine the effects of climate change on installations.

The amendment "ensures that our limited defense dollars are not misused on things outside of the Department of Defense’s mission set," Davidson told the committee yesterday.

The measure would have marked a shift away from energy and climate policy at DOD, which has seen renewables as an important step in curbing rising seas and temperatures threatening military infrastructure.

But Davidson pointed to a 2016 Government Accountability Office report that found two of the 17 DOD green energy projects surveyed would be a reliable energy source in the event of a power outage.

"With the previous administration’s climate change agenda driving behavior, DOD has been forced into making decisions that simply were not economical or met the energy security for the military," he said.

"The arbitrary green energy quotas contained in President Obama’s executive order only steer our military away from identifying how best to meet our energy needs in a cost-effective way," he said.

Davidson’s proposal was similar to an amendment that made it into the House-passed NDAA last year. Conservative groups have backed the provision, worried that Obama’s executive order could take money away from more pressing national security issues.

The Competitive Enterprise Institute yesterday sent a letter to lawmakers, co-signed by 14 other organizations, in support of Davidson’s provision, saying it would eliminate unnecessary burdens for DOD.

"These climate programs and policies have nothing to do with the mission of the United States’ Armed Services," the letter says. "In fact, many of these programs and policies are likely to undermine military readiness by diverting scarce resources to such things as helping state and local governments to ‘go green.’"

Democrats said the energy savings performance contracts established under the order had been successful in saving the government money.

"I hope that we don’t throw out the baby with the bathwater here," Polis said.

"I’m confident that President Trump does not share that assessment, nor does Secretary Mattis," Davidson said.

The Rules Committee also rejected amendments to require the Pentagon to take more account of warming in security planning and report on the impact of the U.S. dumping the Paris climate deal.

Langevin’s language now in danger wouldn’t change much for the military, said Andrew Holland, senior fellow for energy and climate at the American Security Project.

"Congress is just affirming what DOD has been doing for over a decade," Holland said.

"I think that would be surprising for the whole house to vote against something that the House Armed Services Committee has passed on a bipartisan basis," he added.

Attempts to diminish climate change programs within DOD also point to a broader question about whether the Defense secretary has independent authority to determine threats to national security, Holland said.

"Congress shouldn’t determine what’s a threat and what’s not a threat," he said.

The Rules panel did approve for floor debate an amendment from Rep. John Garamendi (D-Calif.) that would strike language approved in committee to prevent the Navy from spending money on icebreakers.

Lawmakers in both chambers have in recent weeks have said the United States needs new icebreakers to expand the nation’s capability in a warming Arctic and compete with a growing Russian fleet in the region.

Garamendi said he could go on about the pressing need for the polar vessels all night. "Oh, you should not have asked me," Garamendi said when asked by Rules Vice Chairman Tom Cole (R-Okla.) to talk about the issue.

"It’s going to take us three to five years to build these things, and we need them today," Garamendi said.

NDAA on the floor

On the floor, House lawmakers stayed well into the night debating more than 80 amendments to NDAA, which the Rules Committee made in order earlier this week.

A provision from Rep. Mike Conaway (R-Texas) that would prevent DOD from entering new biofuels contracts while automatic spending cuts remain law sparked controversy among some Democrats, who said it would undermine military efforts on energy and climate change.

"Military leaders have told Congress time and time again about the threat that climate change, particularly sea-level rise, presents to our military," said Rep. Salud Carbajal (D-Calif.). "It is irresponsible to ignore this reality and not consider more clean energy sources for our military."

Conaway responded that his amendment "does not measurably affect climate change one way or another." Rather, the provision would aim to save taxpayer money in a harsh budget environment, he said. The House postponed further action after Carbajal requested a recorded vote.

The chamber did approve several amendments, including:

Democrats yesterday protested Republican attempts to increase defense spending while not doing the same for domestic programs. They also took aim at the Rules panel allowing a "poison pill" amendment to nix bill language preventing the president from using military money to build a wall between the U.S. and Mexico.

"As I said before, the wall does not do anything to make us a safe country," Rep. Joseph Crowley (D-N.Y.) said at a press conference. "And then I was told the sun was going to pay for the wall through solar paneling," he added. "And now, apparently, it’s going to come out of Defense spending."

Rep. Ruben Gallego (D-Ariz.), who backed the anti-border wall language in committee, called the amendment "a travesty" and a "sneaky gimmick designed to hide their actions." Gallego went on to call the president’s proposal "stupid" and "dumb."

Still, leadership from both sides of the aisle encouraged members to vote for the final passage of the important defense bill, despite objections to specific amendments.

"Sometimes I think when we see something repeatedly we tend to take it for granted," said House Armed Services Chairman Mac Thornberry (R-Texas). "And it is true that for 55 straight years under Congresses of both parties and presidents of both parties there has been an NDAA signed into law."

Meanwhile, Democrats on the House Science, Space and Technology Committee hosted a roundtable yesterday to explore the national security implications of climate change.

Spearheaded by ranking member Eddie Bernice Johnson (D-Texas), lawmakers probed a panel of national security experts about climate mitigation, adaptation and ways to defuse the political gridlock surrounding what the Department of Defense has called one of the greatest risks to national security.

Retired Rear Adm. David Titley, former chief oceanographer for the Navy, said debating science has become a proxy. "As long as you’re having some discussion about the science, you’re not talking about the actual issues," he said.

Titley noted that, as a Pennsylvania State University professor, people come into his office and try to debate him on the research. "You can figure out pretty quickly who someone is, you’re not Newton, you’re not Galileo, you’re some dude. … [I]t’s always a dude," Titley said.

He noted that the sticking points for many people are usually less about the science but more about limiting government control and reducing personal and societal costs.

John Campbell, former U.S. ambassador to Nigeria, said people need to hear about concrete examples of sea-level rise or how climate change is linked to increased terrorism and the migration of populations.

"In the abstract, it’s hard to understand the connection," Campbell said. "I would suggest carrying out education functions, a way to grab attention is not to talk about abstractions, but the specific impact of climate change on a particular place."

The panel also discussed how increased temperature reduces the time troops can spend outside for training. So-called black flag days, when it’s too hot to be outside, have been steadily increasing.

And witnesses said that if nothing is done, the problem will grow. "If Europe thinks it’s got a migration problem now, just wait 10 years," said retired Brig. Gen. Stephen Cheney, member of the Department of State’s Foreign Affairs Policy Board.