How a GOP-backed plan threatens the Atlantic Coast pipeline 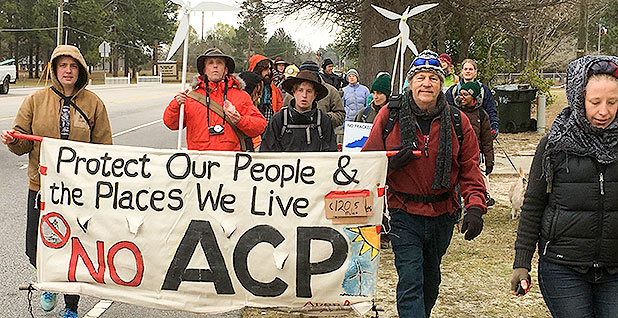 Opponents of the Atlantic Coast pipeline marching in a protest. Mike Soraghan/E&E News

While the law didn’t attract as much attention as the state’s landmark Clean Economy Act — which targets 100% carbon-free electricity by 2050 — consumer and environmental activists say the provision, in tandem with the CEA, could throw up big obstacles for the proposed 600-mile-long gas line.

While fossil fuels continue to make up a significant portion of the country’s energy mix, renewables are quickly catching up (Climatewire, April 21). And advocates argue it may prove imprudent to sink billions into a project that transports a fuel the country is weaning itself off of, especially if ratepayers bear the brunt of the cost.

Championing the consumer protection language, H.B. 167, was Republican Del. Lee Ware of Powhatan. The bill was unanimously approved by both the Senate and the House of Delegates before Democratic Gov. Ralph Northam signed the measure into law early this month.

Ware maintains he’s not opposed to the pipeline, he’s just hawkish on consumer protection. The bill "makes very clear the question that I’ve always wanted answered: Is this necessary for the ratepayers?" Ware said in a statement. "Or is this entrepreneurial on Dominion’s part?"

The law stipulates a utility cannot recoup the costs of large new gas pipelines from its captive ratepayers unless it can prove that infrastructure is necessary for reliability and is the least-cost way to meet electricity demands.

In other words, Dominion Energy Inc., Virginia’s large investor-owned utility and the lead developer of the Atlantic Coast pipeline, must prove the project is the best, cheapest way to keep the lights on in the Old Dominion if it’s going to make customers foot the bill for the capacity it has contracted. If the monopoly is forced to secure outside financing, onlookers wonder if that would scuttle the project.

"That’s the million-dollar question," said Will Cleveland, senior attorney with the Southern Environmental Law Center, who has argued against the pipeline before the State Corporation Commission (SCC), Virginia’s utility regulator.

The fate of the pipeline could be further spelled out when Dominion files its long-range energy plan early next month or if the utility asks regulators to approve passing costs tied to the pipeline along to Virginia ratepayers.

Specifically at issue is a contract between Virginia Power Services, a subsidiary of Dominion, and Dominion for 20% of the pipeline’s capacity. If the SCC rules that the pipeline is the best, least-cost way to keep the lights on, the move could tack on $2.3 billion extra to ratepayers’ bills.

"My hope, and the best thing for everybody, would be for them to cancel the project," Cleveland said. "But failing that, I am cautiously optimistic that Virginia customers will not have to pay for that boondoggle and someone else will have to pick up the tab."

Jeremy Slayton, a Dominion spokesman, said in an email that "we are comfortable that [the pipeline] will meet the criteria in the legislation."

Atlantic Coast, which is slated to run from West Virginia east through Virginia and into North Carolina, was announced in the fall of 2014 with an estimated price tag of $4.5 billion.

The Federal Energy Regulatory Commission approved the project in 2017, and in the ensuing years the estimated cost has ballooned to $8 billion. The cost increase — in combination with other holdups like complicated lawsuits and construction delays — has led financial analysts to downgrade the pipeline as an investment.

The Institute for Energy Economics and Financial Analysis last year published a report detailing the "Vanishing Need for the Atlantic Coast Pipeline."

Now, with the passage of the CEA, Virginia’s energy priorities have dramatically shifted, and Dominion has already felt the impact. The energy giant said its plan for a large-scale expansion of new natural gas in Virginia is no longer "viable" (Energywire, April 8).

The utility is also continuing to hold off on building a third nuclear reactor at its North Anna plant in Louisa County, Va. Slayton said that although the company holds a permit to build the reactor that doesn’t expire, the current economic outlook and forecast for power demand wouldn’t support construction for the time being.

"If the primary purpose of the [Atlantic Coast pipeline] has been to service new natural gas electricity generation, and we are no longer moving in the direction of building out those facilities, then what is the remaining purpose of that pipeline?" he asked.

Slayton, however, said the pipeline and natural gas are necessary to maintain reliability while working toward net-zero emissions by 2045.

Dominion, he said, is proposing to build a total of 1,500 megawatts of natural gas peaking stations in Virginia — two stations in Pittsylvania County (500 MW) and four in Chesterfield County (1,000 MW).

Those peaking stations, he said, are critical to supporting Dominion’s growing renewable portfolio and goal of net-zero carbon dioxide and methane emissions. The plants will also help offset the "inherent intermittency of solar and wind generation," he said.

"It will support the rapid expansion of renewables by keeping the lights on when wind and solar are not producing electricity," he added.

He pointed to a footnote in Dominion’s SCC-approved final fuel factor, or the estimated cost of resources needed to generate electricity for the next year, which states, "[W]e find that at the current time: the overall deliverability of Dominion’s portfolio is reasonably sized for the size of its generation fleet."

"If there aren’t going to be new gas-fired power plants, what need is there for new pipeline capacity if existing plants are already sufficiently supplied?" Anderson asked.

SCC spokesman Ken Schrad urged caution with this line of thinking. "Any statement the commission made in any prior order was based on the facts or circumstances at that time," he said. "Circumstances change, the laws change. Prior orders are not prospective."

Harrison Wallace, the Chesapeake Climate Action Network’s Virginia director, said the strange thing about H.B. 167 is that in the end, both Dominion and the environmental activists were satisfied with the law.

"I was shocked when they got an amendment or two in there and it got them to a point where they dropped their opposition in committee," he said.

Two amendments were added to the law, which Slayton said got the measure into a "practicable form."

"Maybe they think they can get private capital or win the case? I don’t know if they can be that confident," he said.

Paul Patterson, a utility analyst with Glenrock Associates LLC, said the case will come down to how the SCC decides to interpret the new law.

"It’s not really a question of what the environmentalists think or what the company thinks," he said. "It’s what SCC thinks that matters. And the SCC has a mind of its own. I don’t know how they are going to come down on this."

Schrad said that when the time comes Dominion will present its case, and intervening parties will weigh in on how they think the law should be interpreted.

"The commission will make its decision based on the law and the evidence presented, in that order," he said. "The commission follows the canon of ethics, they don’t weigh in on the politics of the day."

He added, "The commission is not in the business of speculating."