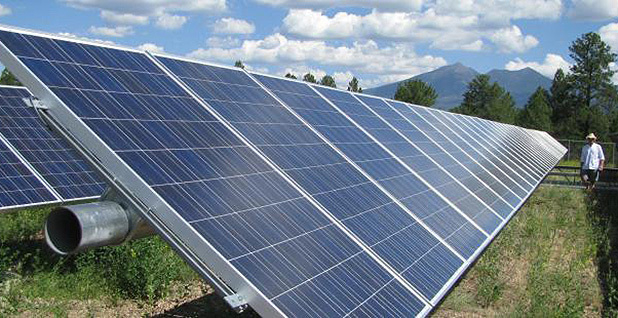 The Caribbean island sits under a tropical sun, is surrounded by waves and has an abundance of wind. And in 2009, experts said the island could conceivably meet all its energy needs with the renewable resources it already had.

But seven years later, only 2 percent of the U.S. territory’s electricity is generated from renewables.

The shortfall comes as the territory and its monolith of a public utility are embroiled in a $72 billion debt crisis that Congress is working to address (E&E Daily, April 11).

Puerto Rico produces no conventional fuels and relies heavily — almost exclusively — on imported oil, which is subject to global markets and often wildly expensive to import.

The status quo has been reinforced by the government-owned Puerto Rico Electric Power Authority, the island’s sole producer and distributor of electricity.

For decades, PREPA has given free power to all 78 of Puerto Rico’s municipalities, along with government-owned businesses and even some for-profit enterprises, racking up $9 billion of debt and burdening its citizen consumers with the high cost of electricity.

PREPA has historically been reluctant to adopt energy diversification measures and until recently was virtually unregulated, operating with little transparency and no oversight.

Meanwhile, a lack of continuity among political administrations and a focus on power production at the expense of distribution have contributed to the renewable shortfall.

The territory isn’t alone in its plight.

Islands are particularly ill-positioned to support the vast power needs of a 21st-century population. In a power failure, residents cannot turn to a neighbor for backup, as is customary on the mainland. And most don’t produce conventional fuels, relying instead on expensive oil and diesel imports.

And many are making great strides. The U.S. Virgin Islands, for example, has cut its fossil fuel emissions by 20 percent and will likely achieve a 60 percent reduction ahead of schedule.

The territory is large, and its top industry is manufacturing, which requires constant and reliable power.

"The system demand sectors are different," said Carlos Reyes, general manager of operations for EcoElectrica, a private energy developer and natural gas importer on the island. "We still have a large commercial and manufacturing sector that requires certain service characteristics, unlike the other islands."

PREPA poses another hurdle for energy diversification. Over the years, conservative planning led its leaders to oppose many efforts to boost renewables, according to Efraín O’Neill-Carrillo, author of the 2009 renewable study and a professor of electrical engineering at the University of Puerto Rico, Mayagüez.

Around the same time, the governor, Luis Fortuño, signed an executive order declaring the island in a state of emergency and authorizing any energy or infrastructure projects to stimulate the economy.

From 2010 to 2012, PREPA’s governing board signed 64 binding and long-term contracts with private developers for 2,200 megawatts’ worth of utility-scale renewable power capacity.

Experts estimated that meeting the 12 percent renewable goal would require 1,200 MW of installed capacity. The only problem was integrating and distributing the renewable energy once it was generated.

PREPA’s engineers cautioned that the system would likely not be able to support that level of renewable integration, but with no formal study to support the notion, members of PREPA’s board plowed ahead.

Many on the island criticized the expedited nature of the contracts, saying they led to project proposals in environmentally sensitive areas and unfavorable consumer rates.

"Those contracts were given out without any type of competitive process," said O’Neill-Carrillo, who also served as senior energy adviser to the current governor. "It was a nightmare. And in my opinion, the large-scale renewable energy market in Puerto Rico has been damaged probably forever because of the impact of the signing of those contracts."

After the contracts were signed, PREPA commissioned a study through Siemens AG, which determined that the current infrastructure would require costly updates to integrate the power PREPA had secured.

In 2012, Fortuño lost his re-election bid. With the newly elected Alejandro Javier García Padilla came new PREPA board members and new eyes to scrutinize the contracts. At the same time, project developers, who had put most of their energy into locking down the financial side of the contracts, were starting to realize that the technical requirements outlined were too vague to guide construction.

The combination brought PREPA and its developers back to the negotiating table.

"That was actually one of the first signs that something really bad was happening," said Morgan Gerard, an energy finance attorney who follows Puerto Rico. "Because they went back to their developers and said, ‘I can’t do this,’ that sends a signal to the market that they’re unstable."

Opening the contracts created mistrust among PREPA, private developers and investors. Some developers pulled out or lost financing, while others entered into a fierce battle with the utility over minimum technical requirements for renewable integration.

The lack of initial due diligence in defining technical requirements meant someone would have to bear an unexpected cost. And PREPA and its developers each thought the other was financially responsible.

But by the time PREPA reached a compromise with its developers, Puerto Rico’s financial situation had worsened.

"There were several developers with contracts for permits for projects who couldn’t get financing," said Carlos Fernández-Lugo, an environment and energy lawyer with the island’s largest law firm, McConnell Valdés LLC.

"Now the majority of the projects are in a frozen state," he said.

Last year, García Padilla announced the island would not be able to repay its $72 billion debt.

While the Supreme Court considers whether Puerto Rico’s public corporations can declare a bankruptcylike status — territories do not have access to bankruptcy protection like states — Congress is drafting its own relief package.

This month, the House Natural Resources Committee, on Speaker Paul Ryan’s (R-Wis.) directive, introduced legislation that would provide the island with some debt restructuring tools and also impose a federal oversight board to help Puerto Rico straighten out its finances (E&E Daily, April 11).

A mostly overlooked portion of the bill would fast-track energy projects under the directive of a so-called revitalization coordinator to be appointed by the federal oversight board. The revitalization coordinator and oversight board would greenlight private power developers’ projects through an expedited permitting process, in an effort to capitalize on private investment to revitalize the energy sector.

But the Title V provision does not specifically address Puerto Rico’s antiquated grid, which is owned and operated by PREPA and has limited renewable integration potential.

PREPA officials are trying to restructure debt and fulfill the renewable contracts as a newly appointed regulatory body is attempting to drag the utility into the 21st century.

After many false starts, the utility recently came to a voluntary restructuring agreement with its bondholders. The deal transfers ownership of PREPA’s debt to a separate entity. A line item would be added to residents’ monthly bills to incrementally pay off the $9 billion debt, freeing PREPA from repayment obligations.

While the deal means consumers will bear the brunt of an increased utility bill, industry professionals are hopeful the move will reinvigorate the energy sector.

"My expectation is that if all works out well with the restructuring, there should be a gradual interest coming back to the Puerto Rico market and hopefully further development of renewable energy projects on the island," said Fernández-Lugo.

While the restructuring agreement would not change PREPA’s business model, the Puerto Rico Energy Commission, established in 2014, is trying to help PREPA make more sustainable long-term plans with an emphasis on what’s best for consumers and the environment.

The commission has required PREPA to submit an integrated resource plan (IRP) with a 20-year energy blueprint for the island and hold public hearings on its operations. Commissions regulate most utilities in the United States. They also generally submit IRPs.

"This is a historic process, in the sense that it’s the first time that it’s happened," said Cecilio Ortiz García, a professor at the University of Puerto Rico, Mayagüez, and member of the National Institute for Island Energy and Sustainability.

The commission also has made inroads with the rooftop solar industry, which continues to grow in Puerto Rico.

A net-metering law was passed in 2007, and with the recent influx of photovoltaic solar installers, the number of residents and businesses with rooftop panels has skyrocketed.

There are around 2,000 projects connected to PREPA’s grid, with upward of 1,500 backlogged permit requests.

"We have to cooperate with PREPA. And this is not a secret, PREPA has been highly criticized for being very, very slow," said José Maeso, executive director of the Puerto Rico Energy Affairs Administration. "Some projects have taken almost a year to be interconnected."

The commission now is working to push PREPA to streamline the permitting process and help residents cut through other bureaucratic red tape.

Observers say PREPA seems more concerned about fulfilling private contracts and complying with the RPS than about innovating with distributed generation or solar communities, which O’Neill-Carrillo sees as the future of renewable energy.

"And that’s unfortunate, because that really doesn’t do justice or maximize the potential of renewable energy on the island," he said.

But before PREPA can comply with the RPS, it needs a little more than 600 MW of new, flexible base generation, according to the Siemens study.

Neither the original contracts nor Title V addresses investment in renewable integration, though PREPA has issued a request for interest for companies to provide new generators or power plants.

Agustín Carbó Lugo, the new commission’s chairman, said the IRP is just the first step for PREPA. In two years, the utility will have to update the IRP, and he plans to work with it to ensure more emphasis on renewable energy and distributed generation.

"There’s a need to have a storage technology to be completely independent from even the grid itself," he said. "People could have independent units. That’s coming. It’s around the corner."

For O’Neill-Carrillo, integrating as much renewable energy as possible means not repeating past mistakes and taking control of Puerto Rico’s future.

"The change will come, and we better take control of what we can still control; otherwise, it will just come, and it will come in ways that are not optimal for Puerto Rico," he said.