How a top official landed in criminal trouble 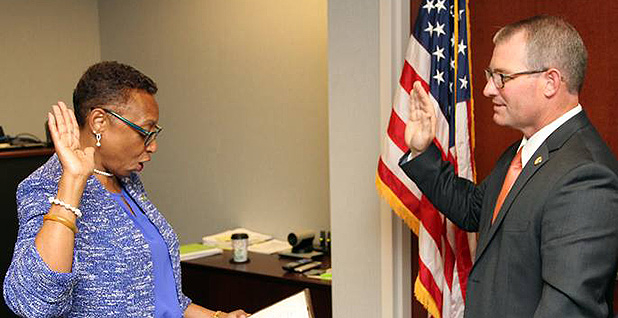 Now, the lobbyist is likely headed for federal lockup. And Glenn, the head of EPA’s Atlanta-based Region 4 office, is under indictment for allegedly violating the state’s ethics law.

Glenn was on Drummond’s payroll at the time as a $250-an-hour consultant. His duties included prodding state officials to oppose the proposed listing. The indictment, announced yesterday by the Alabama Ethics Commission in a two-paragraph news release, accuses Glenn of conspiring to violate the ethics law.

State officials declined to provide details, and the actual indictment had not been posted online as of this morning. But Birmingham-area environmental groups were quick to draw a connection to Glenn’s work for Drummond. Also indicted was Scott Phillips, a co-founder of Glenn’s consulting firm who served until last year as a member of the state commission that oversees Alabama’s environmental agency.

Glenn, 47, has headed EPA’s eight-state Southeastern regional office since August 2017. He did not respond to emailed questions yesterday seeking comment on the indictment and asking whether he plans to stay in his position. Although a Birmingham TV reporter yesterday tweeted out statements purportedly from Glenn and Phillips asserting their innocence, the authenticity of those statements could not be confirmed.

Asked about Glenn’s indictment at an unrelated news conference yesterday afternoon, acting EPA chief Andrew Wheeler said he had just learned of it and would need to know more before he could comment.

"I haven’t had a chance to look into the matter or talk to him personally yet," Wheeler said. EPA press aides did not reply to an email this morning asking whether Wheeler has since done so.

Stan Meiburg, a former longtime deputy regional administrator in Region 4, said he knew Glenn from his time in EPA’s Atlanta office and when Glenn was director of the Alabama Department of Environmental Management (ADEM). Meiburg told E&E News that his experiences with Glenn were "very professional."

He added, however, that Glenn’s indictment will be disruptive for Region 4 employees.

"It obviously will be a source of anxiety within the agency because it creates uncertainty, and no one likes uncertainty," said Meiburg, who went on to be acting deputy chief at EPA under the Obama administration and is now a now a sustainable studies professor at Wake Forest University. "You just don’t know what is going to happen."

"A few people I spoke to weren’t surprised, because they had worked in the Alabama area and were aware of the things he had been accused of," said Davis, who said she was upset by the news but wanted to find out more information.

"I was very appalled that someone in his position was indicted on something like that," she said. "I’m in favor of due process, and he is innocent until proven guilty, so I need to hear more on that."

Davis noted that the deputy regional administrator in Region 4, Mary Walker, interacts the most with employees in EPA’s Southeast branch and is responsible for day-to-day operations.

"I’m not sure it [Glenn’s indictment] will have a major effect, to be honest. I think we will go on and try to protect the environment as much as we can," Davis said.

The indictment is not Glenn’s first brush with Alabama ethics investigators.

During his tenure as ADEM director from 2005 to 2009, the ethics commission found probable cause to believe that he had broken the law to get the job and referred the matter to a district attorney’s office for further investigation, according to news reports at the time. Glenn said he had done nothing; state prosecutors eventually opted against bringing charges.

The two had been friends for years; when Glenn sought the EPA Region 4 post last year, he used Roberson as a reference, according to his testimony. In 2013, Roberson quickly put Glenn in touch with Gilbert. In a follow-up email to another Balch lawyer, Glenn wrote that he was "confident" that his firm’s combination of experience and relationships "will be of benefit to you and your client."

Key to the campaign would be mobilizing Alabama officials to oppose the proposed addition of the Birmingham site to the National Priorities List. There, Southeast Engineering and Consulting had some advantages, both because Glenn was a former ADEM director and Phillips then sat on the department’s governing commission.

Glenn, for example, had ready access to ADEM officials, including the agency’s current chief, Lance LeFleur, according to his testimony and trial exhibits.

"I know we just talked a lot about the issues," Glenn said on the witness stand this July when asked about his contacts with the department’s current director. But he could also play hardball when LeFleur seemed ambivalent about another Superfund proposal involving Drummond.

"I discussed the fact that this appears to be a never-ending witch hunt by EPA against the regulated community and had many people concerned," Glenn wrote in a 2015 email to his clients recounting a conversation with LeFleur. "I warned that taking a passive stance on this would likely not go over well with these aforementioned groups and the Governor’s office."