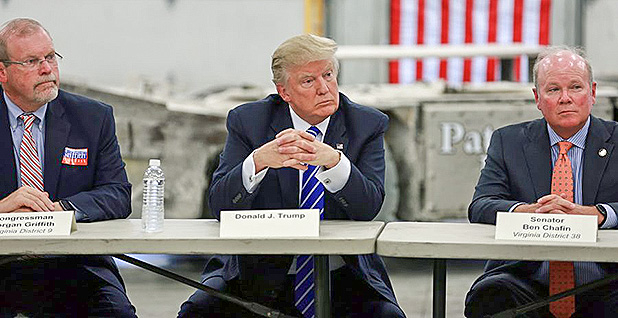 At issue is how EPA treats so-called glider kits — new truck chassis equipped with refurbished diesel engines and powertrains. EPA proposed on Nov. 9 exempting gliders from air emission requirements because those trucks lack powertrains and are thus not "motor vehicles."

A major beneficiary is Fitzgerald Glider Kits, a Tennessee-based company that hosted a Donald Trump campaign event at a sales lot in Virginia coal-mining country in August 2016 and whose executives met privately with EPA Administrator Scott Pruitt last May.

Fitzgerald’s efforts to secure a rule exemption were bitterly opposed by truck managers who maintained that it would put them at a severe disadvantage. Glider kits are about 25 percent cheaper than a new rig — and they pollute 20 to 40 times more than new truck, according to an EPA analysis.

If their emissions are unchecked, gliders, which constitute 5 percent of all heavy-duty vehicles on the road, would generate by 2025 a third of the truck fleet’s emissions of nitrogen oxides, gases that contribute to smog and acid rain.

Truck manufacturers lobbied Pruitt to maintain the emissions curbs. But EPA and the White House Office of Management and Budget echoed the concerns of Fitzgerald Glider Kits, using a legal argument and technical analysis provided by the company.

"This is pretty astounding — and not in a good way," said Chet France, the former director of assessment and standards at EPA’s Office of Transportation and Air Quality and now a consultant for the Environmental Defense Fund.

While little known outside the trucking industry, glider kits account for a growing percentage of the American heavy-vehicle fleet.

Partly because they haven’t had to comply with modern air pollution standards so far, gliders are 25 percent cheaper than a new truck. That has spurred an increase in production from less than 1,000 kits a year in 2010 to more than 10,000 in 2015, according to EPA data.

EPA began regulating glider kits under the Obama administration’s clean-truck rules, or phase 2 greenhouse gas emissions and fuel efficiency rules for medium- and heavy-duty vehicles, which were published in October 2016.

The rules have applied for the first time to glider kits next year and capped kit production at 300 a year per manufacturer.

The Obama EPA estimated that the rule’s requirement that gliders use modern engines in 2018 alone would have prevented between 350 and 1,600 premature deaths over the lifetime of the vehicles.

But left unchecked, refurbished trucks would emit more per year than all vehicles affected by the Volkswagen AG emissions-cheating scandal would have spewed by 2025, according to an analysis by the nonprofit Union of Concerned Scientists.

The major player in the glider business, Fitzgerald, which is based in Byrdstown, Tenn., was founded in 1989 by Tommy Fitzgerald Sr. and his brother Ricky.

It now has 1,600 employees in Tennessee and Kentucky. It produces more than 3,500 trucks per year.

In July 2017, Fitzgerald Glider Kits petitioned EPA for relief from the rule, along with other small manufacturers Indiana Phoenix Inc. and Harrison Truck Centers, saying it would have to lay off 90 percent of its employees if the rule went through.

Fitzgerald has had a powerful ally in Rep. Diane Black (R-Tenn.), who’s running for governor in her home state.

In July 2015, Black introduced and the House passed H. Amendment 630, an amendment to the Interior, environment and related agencies appropriations bill that would prohibit EPA from regulating glider kits as part of its greenhouse gas rules for big rigs. The amendment cleared the House by voice vote.

A former Black staff member, Jon Toomey, registered as a lobbyist for Fitzgerald in late September, according to Senate lobbying disclosures. He received a congressional salary through at least June, according to LegiStorm.

The Senate fiscal 2018 appropriations bill for Interior, environment and related agencies, which was released last week, includes language saying the committee has a "number of valid concerns" about EPA’s regulation of glider kits (Greenwire, Nov. 21).

On Aug. 10, 2016, presidential candidate Trump visited Fitzgerald Peterbilt, a Fitzgerald Glider Kits dealership in Glade Spring, Va., to talk to coal miners during a campaign event. Photos show him posing with smiling Fitzgerald employees and in front of Fitzgerald trucks.

Fitzgerald scored a one-on-one meeting with Pruitt, weeks before the EPA chief announced he would review the glider rule in light of "serious issues" raised in the meeting.

"On behalf of my family and the terrific employees at Fitzgerald Glider Kits, I want to thank Congressman Black and Administrator Pruitt for their leadership on this issue and genuinely caring for the concerns of small businesses like ours," Tommy Fitzgerald Sr. said in a press release distributed by Black’s office at the time.

The EPA chief did not include a regulatory impact analysis, which is not standard practice.

"EPA has not conducted a new analysis of the impacts of the proposed repeal of the emission requirements for gliders," an EPA spokesman wrote in response to several questions.

Fitzgerald had sent that research — which it had partnered on and which had not been peer-reviewed — to EPA.

In August, Tennessee Tech University announced a public-private partnership with Fitzgerald Glider Kits. The new Fitzgerald Technology Complex in White County will house the Tennessee Tech Center for Intelligent Mobility, which had conducted the research on glider kits that contradicted EPA’s own research.

But the proposal was published without the staff analysis. The results were added to the regulatory docket last week. They show gliders emit more than 40 times more nitrogen oxides and particulate matter than equivalent modern trucks on highways, but slightly less carbon dioxide.

EPA’s Office of General Counsel took the lead on writing the Federal Register notice. EPA justified its proposal with a narrow reading of the Clean Air Act to argue that glider kits are not "new motor vehicles" and therefore are not under the agency’s jurisdiction. Fitzgerald had been making the same legal argument.

The notice included a one-line acknowledgement that "some of the benefits for children’s health … would be lost as a result of this action."

In a memo to the docket, EPA staff wrote that the exemption would benefit some small businesses but damage others.

"EPA agrees that either strengthening or weakening the requirements for glider vehicles could potentially impact the competitive balance in the heavy-duty truck market, both advantaging and disadvantaging certain small businesses," the memo says.

The staff also wrote that EPA hadn’t verified energy efficiency claims by the sellers of glider kits and that any fuel savings would decrease if the rule repeal took effect.

‘There is broad opposition’

The proposal was denounced by environmentalists, health activists and truck manufacturers.

"There is broad opposition to this, but it’s clear that the administrator is anxious to open this dirty truck diesel loophole," said Paul Billings, senior vice president for advocacy at the American Lung Association. "That is extremely unusual … in this case, the needs and interests of one small company are a priority over public health and economic competitiveness."

Last month, EPA and OMB held at least four meetings with advocates and industry, according to the OMB website. All opposed the exemption.

On Oct. 30, Navistar International Corp. and Volvo Group representatives told EPA, OMB and Council on Environmental Quality staffers that they didn’t want the repeal to go through. They have long complied with and backed strict emissions and fuel efficiency requirements.

"Glider kits should not be used for circumventing purchase of currently certified powertrains," Volvo, Navistar and Cummins Inc. wrote in a Sept. 11 letter to Pruitt. "The Phase 2 provisions as finalized maintain the glider kit option for the market while ensuring a level playing field for all manufacturers of trucks and engines."

The Truck and Engine Manufacturers Association, the American Trucking Associations and the Truck Renting and Leasing Association have all also voiced concern about the proposed exemption.

"This is one of the very few if not the only regulation in the history of EPA that’s ever had the opportunity to give a payback to fleets," said Glen Kedzie, vice president and environmental counsel at the American Trucking Associations.

"There will be winners and losers if there’s a change."