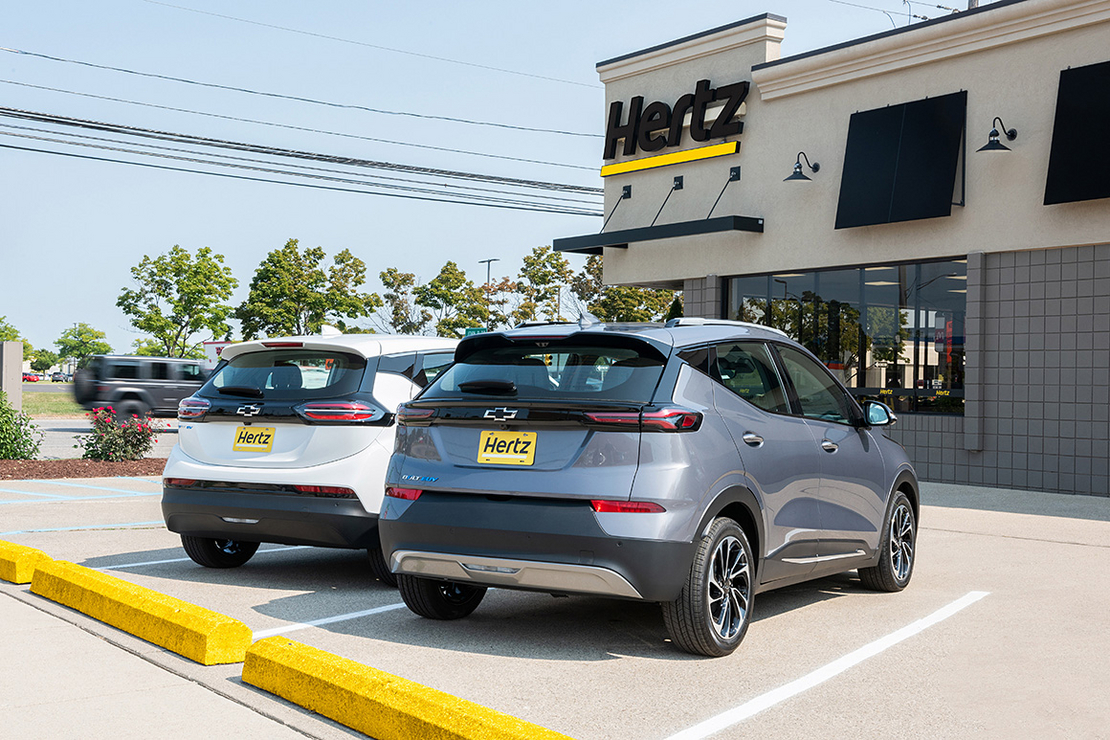 Hertz, the car rental company, and BP, the oil giant, revealed a plan Tuesday for how they will charge thousands of electric rental cars. General Motors/Hertz

Hertz Corp., which is buying hundreds of thousands of electric vehicles, thinks the car itself is just the beginning of wholesale changes to the rental business.

The person renting a car will notice only pieces of it: The rigid rules around fueling will change. Hertz’s partner, the oil company BP PLC, says the rental office, once a mere transition point, could become a sort of lounge with a place to eat.

The biggest changes will happen in “the bowels of the operation,” as Jeff Nieman, a Hertz vice president, puts it. In the hidden pockets of airport parking garages, a big part of Hertz’s infrastructure — its giant new banks of charging stations — could end up serving not just rental cars. According to BP, it’s possible the car wash and cleaning facilities could go the same way. The services would be for a set of new customers: the Uber and taxi drivers who frequent the airport.

Those are some of the changes that could be in store after Hertz, one of the country’s biggest car-rental agencies, announced Tuesday the first draft of a plan for how to fuel its coming fleet of hundreds of thousands of EVs. Its partner is BP Pulse, the new charging division of BP.

The transition from combustion engine to battery is a deeply disruptive one, as automakers know only too well. Now that once-in-a-century change is also starting to engulf car rentals. It is a movement that could get many Americans into an EV for the first time, while changing how industry players operate and seek to make money.

“All the companies are well aware that [EVs are] the going trend and where we’re all headed,” said Sharky Laguana, the president of the American Car Rental Association, a trade organization. “And we’re starting to grapple with what that really means.”

Together, that would make Hertz “the largest EV fleet operator outside of China,” said Vic Shao, the president of BP Pulse.

This morning, BP Pulse and Hertz said they had entered a memorandum of understanding to build an as-yet-unknown number of charging plazas at Hertz locations at airports and also in urban centers that see heavy ride-hailing traffic.

Hertz has already deployed about 1,600 charging stations, with plans for up to 3,000 by the end of the year. This first wave is relatively easy and inexpensive to build. It’s comprised of what in the industry are called Level 2 chargers, which require minimal electrical upgrades and can fully charge a battery overnight.

Nieman says these electron-sippers “have actually been working out great” in the instance of recharging a battery between one customer’s return in the evening and another’s pickup in the morning.

But in order to charge vehicles at scale, Hertz’s infrastructure will need to become much faster — and more expensive and complex. Numerous fast-charging stations will appear alongside the gas pumps that Hertz has embedded within its operations centers at large airports.

That is where BP Pulse comes in. The problem that BP proposes to solve isn’t about installing chargers, though it will do that. The hardest thing is how to coordinate a giant inflow of electricity into a fleet of vehicles that can only charge so fast.

“They have a very tight charging window,” Shao said. “They only have so much time for cleaning and car wash — and now charging — before the car goes out again.”

Late last year, BP bought Amply, a charging startup that focused on providing charging to electric vehicle fleets as a service. That company has now been rebranded as BP Pulse, “with massive resources behind it,” said Shao, who founded Amply.

The companies said they are unsure what logos the chargers will bear. But they do know that a primary customer is the subset of cars driven by ride-hailing and taxi drivers.

Last fall, Hertz announced a partnership with Uber Technologies Inc. to provide its drivers with 50,000 EVs. Unlike most cars, taxis and ride-hailing services spend little time parked and cannot afford to be leisurely about charging. They rack up lots of miles each day, and an electric version needs to refuel quickly in order for the driver to make money.

Those drivers also will need something to do during the 20 to 40 minutes it might take a fast charge to happen — and that’s where the companies see an opportunity.

It’s possible that besides a charge, Hertz will offer taxi and ride-hailing drivers some services a rental agency usually keeps to itself, like a car wash or a cleaning, Shao said. As for the idea of restaurants and lounges, “those are scenarios we’re plotting out,” Shao said. Hertz declined to comment on the prospect of these noncharging services for taxi and ride-hailing drivers.

Hertz says it has a solution to one new problem that rental-car companies face in EV age: unreliable fueling stations. EV drivers frequently complain that EV plugs are unresponsive or take multiple tries before delivering the juice (Energywire, Jan. 4).

The rental agency said it will hope to curb that frustration by guiding its drivers only “to the networks we are familiar with, that we have comfort with and are up to our standards,” Nieman said.

A reason to hurry

Hertz is one of the three biggest rental agencies in the country. The other two, Avis Budget Group and Enterprise Holdings, have spoken of EV-adoption plans but have not offered specifics.

Laguana, the president of the American Car Rental Association, said many of the hundreds of smaller rental-car operators in the United States are also moving toward electrification, perhaps offering five or 10 EVs out of a fleet of 100.

The need to adopt EVs is urgent, he said, not because customers are demanding the technology, but for a financial imperative.

The viability of the car rental business depends in part on the cars’ “residual value” — the price the car commands after its first period of ownership, which in the case of a rental agency is usually less than two years. With expenses and earnings in the rental business generally balancing each other out, the fleet’s residual value can determine whether or not a rental agency makes money.

Rental-agency operators now need to consider the possibility that the combustion-engine vehicles they buy today will have lower residual values. With automakers pouring their best technology into EVs, that electric platform could better hold its value, while cars based on gasoline could decline.

“As a practical matter, we all have to do it on a pretty aggressive time scale,” Laguana said. “I can’t imagine that my industry is going to wait until the last minute to make that transition.”

For those who rent Hertz vehicles, the EV could alter an anxiety-producing part of the rental experience: whether to return the car with a full tank.

Today’s practice is that the customer leaves the rental lot with a full tank of gas and returns it also full, or else pays an inflated per-gallon price to the rental agency. That last-minute top-off is the raison d’être for the gas stations that are often clustered around major airports.

The EV is causing Hertz to find a different rhythm. Instead, the driver will get the car with a battery at least 80 percent full, perhaps more, and is expected to return it at least 10 percent full.

The reason for the drastic departure is all about the electrochemistry of batteries.

Today’s lithium-ion batteries can only fill rapidly with electrons to an 80 percent state of charge, after which they fill more slowly.

With the charging of hundreds of vehicles to juggle, Hertz doesn’t have the time to promise more. The 10 percent return, Nieman said, is about maintaining the health of the battery, as discharging below that level can reduce battery life.

To demonstrate some of the challenges of managing an EV rental fleet, Hertz and BP point to one particular location: Los Angeles International Airport.

LAX, as it is often called, is the fifth-busiest airport in the world, generating so much traffic that Hertz maintains two locations there. From an electricity perspective, the two are worlds apart.

One of the company offices is located in the service territory of Southern California Edison, the principal electric utility for most of that half of the state. There, Shao said, Edison charges its highest electric rates at 9 p.m., four times more than other times of day.

The other office falls into the territory of Los Angeles’ municipal utility, the Los Angeles Department of Water and Power. In its zone, the most expensive time to charge is completely different — between noon and 5 p.m.

These drastically different profiles have profound consequences in the price the companies pay for fuel and could go a long way toward determining where vehicles charge and on what schedules.

“We have two locations, half a mile a part, and what do do about charging and when to do charging is totally different,” Shao said.

Hertz and BP, like other companies who are building heavy-duty infrastructure for electric vehicles these days, have a key question in mind: Will these charging stations qualify for federal aid?

The bipartisan infrastructure bill that President Joe Biden signed last November included $7.5 billion to build EV infrastructure. The first part of that funding was issued to states earlier this month, and more dollars will follow for the next five years. The rules for what kind of stations get help are still being written.

Rental agencies believe they deserve assistance because they could lower one of the biggest barriers to EV adoption: Most people simply have never had the chance to drive one. The brief and low-commitment transaction of an EV rental, they argue, could contribute to changing the American public’s attitude toward the new platform.

“We’re a likely first contact for electric cars, and it would be frustrating if we didn’t actually have the ability to provide that,” Laguana of the American Car Rental Association said.

One hurdle the rental agencies may face is that chargers must be publicly accessible to qualify for infrastructure dollars. Many of an agency’s chargers are likely to be hidden from the public.

“These are super tricky spots for customers to get to” because of their inaccessibility, Nieman said.

However, the public benefit of the chargers offer a counter argument that could still woo federal money.

‘The interpretation of that we’re still working through,” Nieman said.