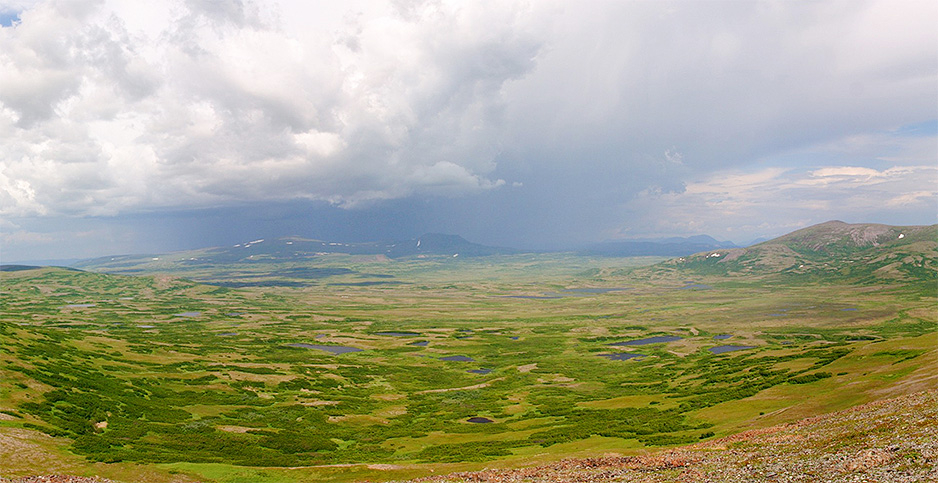 A view of the proposed Pebble mine site about 200 miles southwest of Anchorage, Alaska. Erin McKittrick/GroundTruthTrekking.org

Tumazos told E&E News that Leopold’s memo, issued seven days after his conversation with Thiessen, was a "foregone conclusion."

"I don’t think anyone gives a fuck about the veto being thrown out; I think that’s all anticipated," he said in an interview last week.

"My surprise is it didn’t happen a hell of a lot longer ago," he said.

Collier noted that Leopold only inherited control over Pebble matters March 20, when EPA chief Andrew Wheeler recused himself due to a potential conflict of interest arising from his former lobbying firm’s work on behalf of the mining company (Greenwire, March 26). Leopold met with Pebble officials at EPA headquarters May 15.

Sources say President Trump’s relationship with Alaska Gov. Mike Dunleavy (R) may have played a role in moving up the timing.

Pebble backers have been predicting EPA would scrap the veto since Trump took office. EPA transition team leader Myron Ebell and other high-profile conservatives condemn the Obama administration’s attempt to preemptively use EPA’s veto authority over Army Corps of Engineers’ permits under Section 404 of the Clean Water Act.

Before Pruitt resigned amid unrelated scandals, he started and then aborted the process to kill the veto, noting that the mine would be in headwaters of Alaska’s Bristol Bay.

Many expected that meant waiting for the Army Corps to issue a final environmental impact statement (EIS) for the mine plan that Pebble submitted between Pruitt’s flip-flops.

A legal settlement with Pebble guaranteed EPA would not impose a veto until after a final EIS. What’s more, in comments submitted to the Army Corps, EPA said the draft EIS is missing critical information (Greenwire, July 8).

Since Dunleavy took office in 2018, he has met with Trump three times aboard Air Force One during the president’s refueling stops at an Anchorage military base en route to and from Asia.

"Natural resource development in Alaska is handicapped due to the EPA’s failure to officially announce that a preemptive Clean Water Act 404 veto is not going to be used anywhere in the state," Dunleavy wrote.

After a second meeting on the tarmac at Joint Base Elmendorf-Richardson on May 24, a Dunleavy spokesman told the Anchorage Daily News that the governor and Trump discussed "resource development, streamlining regulations and other items directed at growing Alaska’s economy."

"We’re working on a whole bunch of things together," he said.

Dunleavy’s letter to Trump mentions four issues EPA has jurisdiction over, including the Pebble veto and air quality in Fairbanks. EPA is actively working on the other two — rewriting the Waters of the U.S. regulation and changing states’ ability to weigh in on Clean Water Act permits.

Leopold’s memo stunned Pebble foes, in part because he had just been in Bristol Bay two weeks earlier as part of a three-day trip to Alaska.

"You openly told us that EPA had ‘no timeline’ for any potential further review of the Proposed Determination," those groups wrote in a follow-up letter to Leopold after the undated memo was released.

"Your specific words were that former Administrator Pruitt’s directive on the Proposed Determination ‘still stands.’"

The morning of the memo’s release, the Bristol Bay Native Corp. was in Washington, D.C., telling EPA staff about alleged deficiencies in the Army Corps’ draft EIS.

"We’ve always appreciated the open dialogue with current EPA officials," BBNC Vice President Daniel Cheyette said. "That’s why we were particularly disappointed to learn mere hours after a meeting at EPA headquarters … that the agency would restart the withdrawal process."

It wasn’t the first time the Trump administration had kept Native opponents in the dark: In February, BBNC had a call with Army Corps officials hours before they released the draft EIS, and were given no warning.

"This is no way to treat the people and communities that would be directly affected by EPA’s actions," Cheyette said.

Northern Dynasty was still a penny stock after the Leopold memo, but renewed hope of lifting the veto can only help the company’s efforts to raise the money it needs to continue permitting.

When he spoke at Tumazos’ conference in New Jersey, Thiessen told attendees that the company had recently undergone a "very painful" $7.5 million refinancing in order to proceed with the permitting process, according to a recording of the event.

"I’m disappointed that people aren’t going to jail," he said.

With Pebble confident it can meet all environmental requirements and that the Army Corps’ draft EIS did not predict significant damage to salmon populations, Tumazos said investors are looking beyond the veto with hope.

"The project is more salable than it’s ever been," Tumazos said.