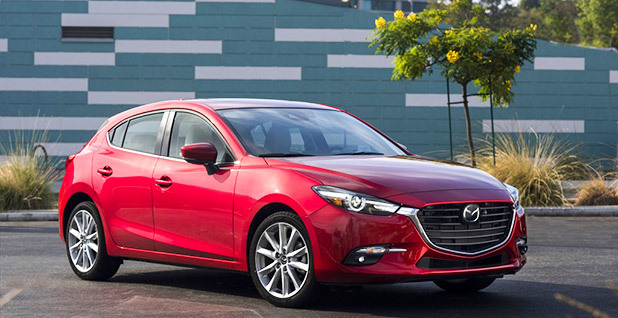 The Mazda3 was the automaker’s first model to use Skyactiv technology. Now, the company’s entire fleet includes it. Photo courtesy of Mazda Motor Corp.

In 2007, Mazda Motor Corp. made a striking promise.

Though the company planned to continue exclusively using petroleum engines, its "Sustainable Zoom-Zoom Strategy" committed to providing "all customers who purchase Mazda vehicles with driving pleasure as well as outstanding environmental and safety performance."

The statement may sound like a no-brainer in today’s marketing strategy, combining the three things customers want most.

But back then, the promise seemed untethered to the realities of mechanical engineering. The most efficient engines simply couldn’t produce the kind of power that more polluting engines could.

Its Skyactiv engine, still used by the company today, increased fuel efficiency and torque by 15 percent over previous models.

Environmentalists, mechanical engineers and federal regulators alike have hailed Mazda’s innovations as a success. Skyactiv has received particular attention this summer when the government began a review of whether its CAFE standards for 2021 to 2025 are realistically achievable for automakers.

Advocates say Mazda proves compliance is possible, even as other manufacturers argue the standards are too technically difficult and expensive to meet.

"What Mazda has done is turn everything on its head," said John German, senior fellow at the International Council on Clean Transportation.

Skyactiv did not exist in the early 2000s when EPA and the National Highway Traffic Safety Administration started working on current light-duty vehicle CAFE standards that aimed to achieve fleetwide fuel efficiency averages of an estimated 54 mpg by 2025.

In its final rulemaking, the federal government focused on turbocharged downsizing as the primary way industry could comply with the standards. But automakers bristled at the technology, noting it was expensive and did not always perform as well in real-world driving conditions as in the lab.

"The manufacturers made it clear they were not all going to turbocharge," said Therese Langer, transportation program director at the American Council for an Energy-Efficient Economy.

The rule also mentioned the unpopular Atkinson cycle engine, which was efficient but weak. At the time, it was generally used only in hybrids like the Toyota Prius that supplement engine power with electric motors.

And while automakers could go all-electric to comply with the standards, the technology was both expensive for manufacturers and unpopular with consumers at a time when the Tesla Roadster was the only domestically available electric car.

"To really affect global fuel consumption and emissions, we felt you had to use something the globe actually used, which was still petroleum," Mazda Director of Government and Public Affairs Daniel Ryan said.

Because companies looking to build purely gas-powered cars didn’t have many options, Ryan said, the company "set our engineers loose to dream."

Skyactiv was the solution.

Engines can be made more efficient when their cylinders compress gas and air to smaller and smaller volumes. Compressing air and gas makes it easier to ignite all of it without wasting any, increasing thermal efficiency and power. But increasing an engine’s compression ratio also has its pitfalls; fuel heats as it is squeezed, and the more it is compressed, the more likely the fuel is to ignite early, wasting energy.

Mazda was able to increase its engine’s compression without fuel overheating by changing piston shape and directly injecting gasoline into each cylinder right before it should ignite, ensuring it would not prematurely combust. Mazda also elongated the engine’s exhaust manifold to further delay combustion.

The result was an unprecedented compression ratio of 14:1.

"When they first did that, it was unheard of," German said. "What it results in is that they are now able to do these high-efficiency cycles without loss in performance."

In real-world terms, that makes Mazda vehicles far more efficient than other cars of similar sizes.

According to a National Research Council report from 2015, the compact Mazda3 consumes nearly 10 percent less fuel than the Ford Focus. The midsize Mazda6 consumes 12 to 14 percent less fuel than the Hyundai Sonata or the Ford Fusion. What’s more, the estimated cost of a Skyactiv engine is "considerably lower" than a downsized turbocharged engine, according to the NRC report.

"We have been proven right," Ryan said. "We are having that impact on greenhouse gas and emissions."

With other automakers working to comply with CAFE standards, that impact is industrywide.

Langer credits Mazda with creating another means for automakers to comply with the standards than using the turbocharging and Atkinson engine technologies touted by the government.

"It is an alternative pathway toward getting very substantial improvements of the efficacy of a gasoline engine," she said. "Having diversity is extremely important."

That’s something federal regulators have seemingly encouraged. In their draft technical assessment report released last month evaluating CAFE standards, EPA and NHTSA note that Skyactiv is a new technology that was "not foreseen by the agencies" when they initially made the rule.

Today, the engine shows that "significant improvements from baseline fleets are broadly achievable using conventional power trains," says the report, which EPA will use to decide whether to adjust the standards.

Other manufacturers like Toyota Motor Corp. and Hyundai Group have been working on engines of their own that incorporate elements similar to Skyactiv.

"You have to give Mazda a lot of credit for believing in the technology at a time when most were fairly skeptical of it," German said. "Other companies are doing it now, but they have simply been the leader on this."

But Skyactiv can take the company only so far, and Mazda is again hoping to dream big to meet later CAFE standards.

The company is looking at some traditional routes of further improving its fuel economy, through using lighter materials and improving transmission. It is also toying with the idea of creating an electric drive option on some vehicles.

But Mazda is putting the bulk of its research and development heft behind a second generation of Skyactiv that would use something called homogeneous charge compression ignition (HCCI), which could once again fundamentally advance engine technology across the industry.

HCCI would use cylinder compression itself to combust fuel instead of a separate spark. Theoretically achievable, it has never before been used in an actual vehicle engine and is often referred to as the holy grail of energy efficiency.

But Mazda has confidence it can conquer the technology and increase Skyactiv’s fuel efficiency by 30 percent.

"As an engineer leader, it makes sense for them," said Dave Cooke, senior vehicles analyst at the Union of Concerned Scientists. "There is a pride there that they know what they do really well, and they really think that they can get more out of the internal combustion engine than anyone else. They are rolling with it as far as it can take them."

Anyone can do it

Mazda’s bullish approach to CAFE standards stands in contrast to the posture of others in the industry.

The Alliance of Automobile Manufacturers has argued that the standards unfairly burden automakers by evaluating the efficiency of cars sold to consumers rather than cars produced by automakers. They say consumers don’t want to pay more for greater fuel economy, which can be technically difficult and expensive for manufacturers to achieve.

Alliance spokesman Wade Newton argues that increasingly aggressive standards don’t do as much for the environment as spurring vehicle turnover.

"Adding technology and regulatory costs that lock buyers out of new cars is counterproductive and risks manufacturing jobs in the Midwest and the South," he said.

Safe Climate Campaign Director Dan Becker points out that other manufacturers have become adept at using technology to make some of their vehicles more efficient. But most other automakers use those technologies only in select models, whereas all Mazdas have Skyactiv.

"It ain’t rocket science, it’s auto mechanics," he said. "All of the technology that is available is used by all of the auto companies on at least some of their cars. If they wanted to use more of it, they could do it."

German acknowledged that as a manufacturer that focuses almost exclusively on sedans, Mazda can more easily use one efficiency technology across its entire fleet; it doesn’t have to innovate for light trucks, as well. But, he noted, the automaker’s limited portfolio also puts it at a disadvantage with CAFE standards at a time when consumers are currently buying larger vehicles.

"Their limited product line is a two-edged sword," he said.

For Mazda itself, Ryan said the important thing is that the benefits of Skyactiv are available to all Mazda buyers.

"It’s what we call fuel economy for everyone," he said. "You don’t have to buy the fuel economy edition of our car, or pay $2,000 extra for the hybrid. If you buy the car, you get the tech. It’s better for you, and it’s better for the environment."