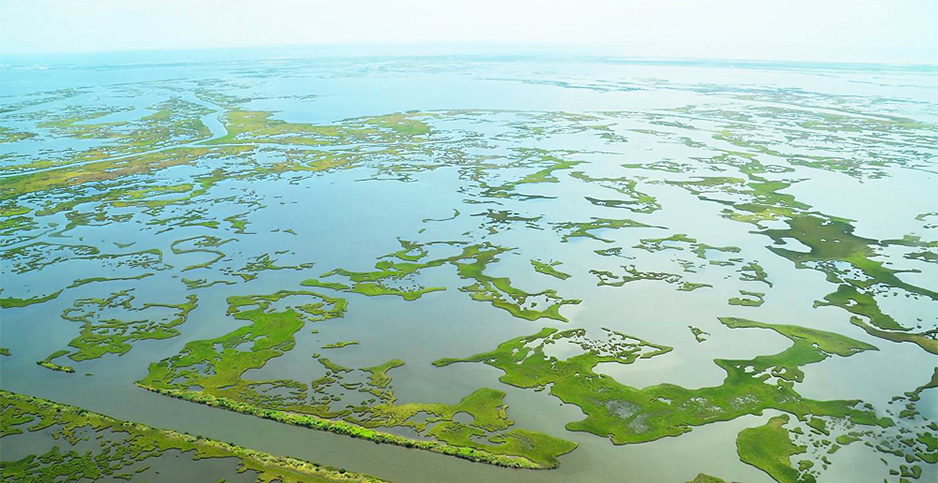 The Mid-Barataria sediment diversion project aims to direct more than 12% of the Mississippi River's flow into Bataraia Bay in southeast Louisiana. NOAA

A massive coastal restoration project in Louisiana could test whether new wetlands can be created faster than they’re disappearing under waves and rising seas.

The $1.5 billion project would redirect more than 12% of the Mississippi River’s flow into Barataria Bay, a nearly 600,000-acre expanse of degraded marsh that’s drowning in salt water. The proposed plan would deposit millions of tons of land-building sediment in the basin over the next 50 years.

"This is the largest coastal restoration project of its kind, anywhere in the country," Chip Kline, chairman of the state Coastal Protection and Restoration Authority, said of the Louisiana project. The idea was proposed in 2013, three years after the catastrophic BP PLC oil spill from its Deepwater Horizon production site.

The basin, which was walled off from the Mississippi River by levees about 100 years ago, is seeing some of the highest rates of land loss on the planet. Rising seas are consuming wetlands and turning brackish waterways salty, endangering essential habitat for fish and shallow-water species.

The accelerating process is made worse by hurricanes, maintenance of navigation channels and ongoing damage from a network of narrow canals cut into the marsh for oil and gas development, experts say.

The Barataria diversion project could determine whether portions of Louisiana’s coastline can be saved — and whether similar techniques can be used elsewhere.

At the heart of the project are "adaptive management" principles, which hold that targeted actions can help restore or mimic natural conditions before people altered the landscape and ecosystems. Just as the Mississippi River was redirected a century ago by the Army Corps of Engineers to reduce flooding and accommodate commerce and development, it now must be reengineered to mimic past conditions, experts say.

Louisiana has lost an estimated 2,000 square miles of marsh — an area the size of Delaware — to the Gulf of Mexico since the 1930s. The state stands to lose up to 4,200 additional square miles over the next 50 years if nothing is done and sea levels continue rising at current rates (Climatewire, Oct. 4, 2019).

It could take more than a year for the Army Corps of Engineers to permit the Barataria diversion. The project, financed with settlement money from the 2010 Deepwater Horizon oil spill, received a draft environmental impact statement from the agency last week. Construction could begin in late 2022 if there are no delays, officials say.

The project faces stiff opposition. Fishers in Plaquemines and Jefferson parishes, which adjoin the Barataria Basin, say an influx of fresh water from the Mississippi River would kill or displace commercially vital finfish, shrimp and oysters (Greenwire, June 13, 2018).

That could devastate Louisiana’s $4 billion commercial and recreational fishing sector, and the unique cultural heritage of southeast Louisiana, said George Ricks, president of the nonprofit Save Louisiana Coalition.

"We’ll be decimated, it’s as simple as that," Ricks said in an interview. "They’re going to turn the estuary totally fresh and change that delicate balance of fresh and salt water that our shrimp, crab and oysters rely on."

A recent study by the NOAA Fisheries found that a massive surge of fresh water into Barataria Bay could kill roughly a third of the bay’s dolphin population and displace others to deeper water. Ricks called Barataria’s dolphins "the canary in the coal mine."

Billy Nungesser, Louisiana’s Republican lieutenant governor, said the project is rife with assumptions about the effectiveness of diverting billions of gallons of fresh water and sediment into Barataria Bay. The project could harm the ecosystem, he asserted, because the Mississippi’s water and sediment is polluted.

"They call it freshwater. Let’s call it what it is, polluted water," Nungesser said. "In my view, BP money should not be used for this."

He said the funds would be better spent building up existing levees, natural ridges and bay islands to protect what remains of Barataria’s wetlands. That would also help preserve local communities and blunt hurricane storm surges that rip through fragile wetland areas.

"We can use more fresh water, but the days of thinking we’re going to create land substantial enough to protect anything are long past," Nungesser said. "We’ve got enough BP money to save our coastline. God forbid we waste it. We’ll never have this chance again."

Project proponents, including state restoration officials, acknowledge the diversion will change the bay’s salinity and raise water levels in communities like Ironton, population 4,000, though not to the extent critics argue and not without mitigation efforts.

They say piecemeal projects like those Nungesser proposed could prove equally expensive, while long-term losses to the fishing economy could be much higher.

"We’re racing against time, and the clock is running on two things," said Steve Cochran, campaign director for Restore the Mississippi River Delta and associate vice president for coastal resilience at the Environmental Defense Fund. "One is our ability to get projects like the Barataria sediment diversion in place. The other is addressing the emissions that are making the impacts on our ecosystem more dire."

Cochran also said the benefits of sediment diversions are unique to southeast Louisiana. That’s because the immense power of the Mississippi River can push fresh water deeper into historically brackish bays and distribute large amounts of sediment faster and further than conventional pump-and-fill projects.

During peak spring flows, he said, the Mississippi flows at 1.2 million cubic feet of water per second at New Orleans. The Barataria project would divert 75,000 cubic feet per second from the main stem and dump enough sediment to build nearly 50 square miles of wetlands in 50 years, modeling shows.

As for sea-level rise and tropical storms counteracting the land-building effort, Cochran said models indicate land would accrete faster than sea-level rise until 2070, after which additional measures can be taken to preserve what will be a much more stable wetland system.

"I don’t think it means we lose the fight [against sea-level rise], we just have to stay in the fight," he said.

For the next nine months, however, the fight will focus on the draft environmental impact statement, which is under public review until May 4. Lawsuits are likely, said Ricks of the Save Louisiana Coalition, including over what critics say are ballooning costs, which they say are now estimated at $2 billion.

Before Barataria Bay was the focus of restoration and combating climate change, it was "ground zero" in the Deepwater Horizon oil spill, said Kline of the state Coastal Protection and Restoration Authority.

The BP disaster, the largest offshore spill in the nation’s history, released 134 million gallons of oil over 87 days and soiled 1,300 miles of shoreline along five states. Scientists say the spill killed thousands of marine mammals and sea turtles, including many animals protected under the Endangered Species Act.

Years following the spill, the effects continue to linger, from impaired immune systems in some wildlife to studies showing twice the normal land-erosion rates in areas most directly polluted by the oil (Greenwire, June 27, 2012).

"The reason why the [Louisiana Trustee Implementation Group] and these federal agencies are paying such close attention to this for BP oil settlement dollars, is this was really ground zero for the BP oil spill," said Kline. "This is one of the most heavily oiled areas in all of the Gulf Coast, was the Barataria Basin. And so that’s why you see … dollars allocated to address specific injuries associated with the spill being used to fund this project."

The state created a master plan for coastal restoration in 2007 after hurricanes Rita and Katrina. In turn, the federal government decided that if it was going to invest $14 billion in a hurricane risk reduction system around the Greater New Orleans area, the state needed to "get its act together," said Kline.

That prompted a restructuring of the state government and the creation of the Coastal Protection and Restoration Authority. Billions of dollars have been spent since on dozens of projects. Some have proven effective, some not, observers say.

Now, the coastal restoration agency is pushing forward with the sediment diversion project with the belief that the coast can’t be saved without restoring flows into basins that have been starved of sediments and nutrients for generations.

"We’ve always known that if we’re going to save south Louisiana, the most important thing that we can do is reconnect the Mississippi River to our coastal marshes to reintroduce that sediment flow," Kline said. "This project is all about mimicking the natural process that built the state of Louisiana to begin with."