How the ‘Jerky Boys of Russia’ punked Rick Perry 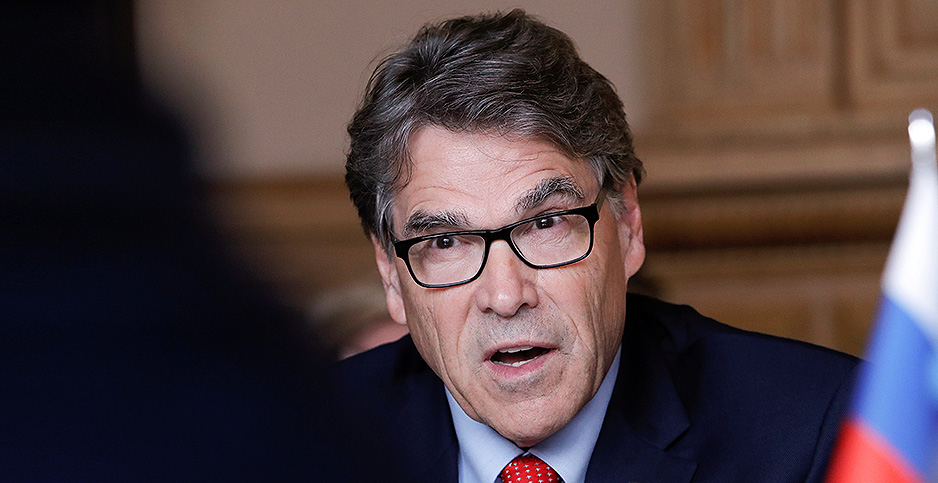 A couple of pranksters known internationally as the "Jerky Boys of Russia" managed to get Energy Secretary Rick Perry on the phone last year for 20 minutes.

The recorded conversation, later leaked online, touched on everything from making fuel from pig manure to exporting U.S. coal and exiting the Paris climate accord.

Behind the scenes, the call was no laughing matter at the Department of Energy’s Washington, D.C., headquarters, according to documents obtained by E&E News under the Freedom of Information Act.

Aides engaged in a frenzy of emails, asking questions and seeking an official translation shortly after the Russian pranksters published the recording online on July 25, the documents show.

DOE did not respond to a request for comment about the documents or whether internal protocols and vetting have been stepped up in light of the call. Instead, the agency pointed to a statement put out the day the call was reported, acknowledging that the prank occurred shortly after Perry hosted the president of Ukraine at DOE’s headquarters on June 20, 2017.

The incident began to unfold mere days after that visit on July 12, 2017, when Russian pranksters Vladimir Kuznetsov and Alexei Stolyarov, better known in Russia as the duo "Lexus and Vovan," responsible for pranking Elton John, U.N. Ambassador Nikki Haley and other world leaders and politicians, set their sights on Perry.

Posing in an email as a top staffer for Ukraine Prime Minister Volodymyr Groysman, the duo asked Stan Gerdes, a longtime political aide to Perry now serving as DOE’s director of scheduling and advance, for an interview.

As requested by the President of Ukraine, the Prime Minister Volodymyr Groysman would like to hold a telephone conversation with the Secretary of Energy mr. Richard Perry. The subject of conversation: 1) Coal partnership 2) Annual energy risks for Ukraine and Europe. Could you please let us know whether this is possible and when?

But the message hadn’t originated in the prime minister’s office. In fact, the email didn’t even have Stolyarenko’s address attached.

Instead, it appeared to have been sent from someone named Dmitro Krasnenko with an email address ending in "ukr.net."

Seven days later, DOE learned that the July 19, 11:30 a.m., call was fake. But even before the discovery, the documents show concern among staffers.

According to the notes, "Secretary Perry was reliant on the [government of Ukraine] translator and did not have an American translator to assist with the call. The GOU translation was not at an acceptable level for clear understanding of the questions and the entire phone conversation."

By that afternoon, DOE acknowledged publicly that the secretary had been pranked.

"Secretary Perry is the latest target of two Russian pranksters," a spokeswoman for the agency wrote in a statement that later appeared in The New York Times, USA Today and other national publications.

From coal to ‘pig manure’

The DOE chief has been known to make gaffes that have triggered chuckles, but he’s also emerged as a savvy politician who quickly recovers.

Most infamous of those moments was when Perry said at a presidential debate in Detroit in the summer of 2011 that he wanted to eliminate three agencies, including DOE — except that he couldn’t remember the department’s name at the time.

"It’s three agencies of government when I get there that are gone — Commerce, Education and the, um, what’s the third one there?" he asked.

During the 20-minute call on July 19, a woman was heard purportedly putting Perry through to Groysman, the prime minister of Ukraine.

"Secretary Perry, you are now on with Prime Minister Groysman," said a female voice.

"It’s good to hear you, and we look forward to getting over there at the end of August, hopefully getting to shake your hand and spend some time with you," Perry responded.

The recording includes Perry’s responses in English to the prankster speaking in Russian.

The secretary went on to discuss the United States’ interest in recruiting oil and gas development companies to Ukraine.

Perry reiterated U.S. opposition to the Nord Stream 2 pipeline for Russian gas and defended Trump’s decision to withdraw from the Paris climate agreement.

"I hope that stepping away from the Paris accord will not have any negative impact with our relationship with the Ukraine," Perry said. "We tried to divorce the politics from this and really just let our record stand, one that I’m very proud of."

On the call, Perry also hinted repeatedly that the Commerce Department was working on ways to bring more coal to Ukraine, saying Commerce Secretary Wilbur Ross was on the case.

"The coal conversation at this particular point in time is with Secretary of Commerce [Wilbur] Ross, and I full well suspect it will go forward," he said.

At one point, Perry offered an administration-level contact to help streamline Ukraine’s geologic information tied to oil and gas development and suggested making data available to attract U.S. producers and their investments.

Near the end of the discussion, the pranksters asked Perry about a new biofuel that combined home-brewed alcohol and pig manure.

"I look forward to being able to visit with the president and getting a more in-depth briefing," Perry said at one point. "If that’s the result, then he’s going to be a very, very wealthy and successful man."

Toward the end of the call, Perry said he would try to get Griffith to send along the name of an individual from Texas to help with oil and gas logistics before his trip in August.

While the phone was a prank, Perry’s intentions were not.

This month, he traveled to Ukraine to visit a coal-fired power plant where the fuel from Pennsylvania is being burned for power, posting on Twitter photos of himself alongside Ukrainian workers wearing hard hats.

"The shipment of Pennsylvania coal from @XcoalEneegyRes to Ukraine is just one example of America’s readiness and commitment to help diversify Europe’s energy markets. #coal #energy #exports," Perry tweeted.

Earlier that morning, the pranksters had posted the interview to Russian news website Pravda Report.

Raffi Nersessian, an energy analyst in DOE’s Office of International Affairs, flagged a video of the call for top agency officials right before 9 a.m. that day.

Within the hour, DOE officials were examining the original request to Gerdes and instructing Samuel Buchan, a senior adviser for international affairs, to send a link of the interview to the U.S. Embassy in Kiev for an official translation.

"We received word today that the Secretary’s call with PM Grosyman was not likely with the PM, but rather with two Russian pranksters," Buchan told DOE spokeswoman Shaylyn Hynes in an email on the morning of July 25.

"This is similar to what was reported to have happened to NATO chief [Jens] Stoltenberg. Below is the link of Russia media reporting on the issue. They discuss the ability of the hackers to reach the Secretary and then transition the conversation to U.S. pricing of coal exports to Ukraine, in an attempt to counter the negotiations (apologies it is in Russian). After a search it was found that only one person on twitter had picked up the matter," Buchan said.

In one exchange, Griffith appeared to examine the address in the prankster’s email, writing, "What is the significance of the Bankova address?"

The email back-and-forth shows a flood of media requests that would generate buzz-worthy headlines.

"Listen to Russian pranksters trick Rick Perry into a conversation about pig manure," read The Washington Post headline. The New York Times opted for a listicle of leaders and celebrities who fell victim to prank phone calls.

Jeff Navin, former acting chief of staff and deputy chief of staff at the Department of Energy from 2011 until 2013, said the way to prevent such mishaps is by ensuring that career staff who work daily on the issues are looped in to any calls ahead of time.

"The thing that seems really weird about it is that you’re talking about a conversation with the prime minister of an extremely important country in the middle of one of the biggest geopolitical conflicts in the world right now," said Navin.

DOE, he said, appears to have left out the National Security Council, the State Department and embassies when preparing for the call. Navin also said he was surprised to see Perry didn’t have a translator.

"We have a massive foreign affairs enterprise that’s specifically designed to make sure there’s consistent messaging and conversations with world leaders," he added. "To think we’d handle this as if we were handling a scheduling request from the governor of Rhode Island, it’s just sort of strange."

Navin said the call raises questions about whether the agency is using all government resources and engaging the correct people.

He said the appropriate process would have been to flag a request from the head of state from any country to the DOE Office of International Affairs, then the National Security Council and State Department. What would follow, he said, might be a preparatory call between the DOE staff and the prime minister’s office.

Navin questioned whether the Trump administration’s skepticism toward the "deep state" or career officials led to the limited handling of the request.

"Why on earth are you having the secretary on a call with another country without a translator?" he added.

While news of the prank call would draw immediate questions from outlets across the nation, one tried an alternative pitch.

What about a parody between Rick Perry and Russian President Vladmir Putin as a shot at redemption, Conservative Review’s television program, CRTV, offered in an email to DOE. The outlet did not immediately respond to a request for comment.

"Just checking in to see if there’s any possibility Secretary Perry would be interested in an opportunity to make light of the situation with us," wrote Alicia Hesse, a producer at CRTV LLC, on July 27. "We’re big fans of his free market policies for energy and want to hear more about that, too!"

In a follow-up later that day, Hesse fleshed out the idea, writing, "We know Secretary Perry has a great sense of humor and we’d like to give him the opportunity to redeem himself in a parody sketch with CRTV."

The faux phone call between Putin and Perry would highlight footage of Putin at the Olympics to make it look like he was reacting to the DOE chief in real time, she explained. Perry could even personalize the language.

Perry and Putin, according to the exchange that never occurred, would chat about the treachery of Washington, D.C., traffic, the weather and plans for the 2020 elections:

Perry: No, I need to know for real, like honey from the yellow rose of Texas real, that this is Putin. Give me the secret telephone code we discussed.

Perry: Okay, good. It’s you. Your "Jerky Boys" of Russia pulled a pretty good prank on me.