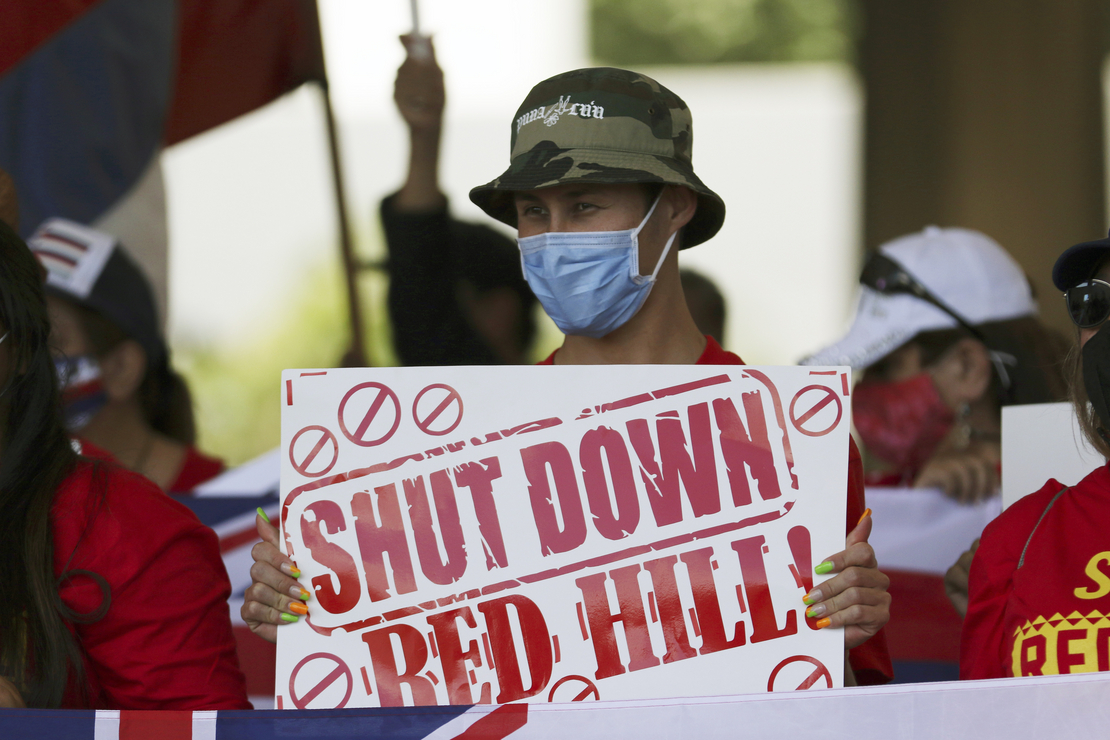 People hold signs in front of the Hawaii state Capitol during a rally calling for the closure of the Navy's Red Hill underground fuel storage facility near Pearl Harbor on Feb. 11 in Honolulu. Late last year, jet fuel leaked into drinking water and showed up in military family homes. Many families became ill or developed rashes after bathing in and drinking the water. AP

Hundreds of people are in the process of suing the government over illness and disruption to their lives they attribute to water contamination from Navy fuel spills in Hawaii last year, according their attorney.

Two fuel leaks from the Red Hill Bulk Fuel Storage Facility in 2021 contaminated water for thousands of residents. The Navy admitted operator error for two leaks, with at least one contaminating the water for the base (Greenwire, Sept. 15).

Four plaintiffs filed a lawsuit against the government in Hawaii District Court on Aug. 31, and Kristina Baehr, attorney for the plaintiffs, said she has more than 700 additional plaintiffs in the process of filing.

“We’ve seen what happens, we know what happened at Camp Lejeune,” Baehr said in an interview. “That’s what’s going to happen to these families. This is Camp Lejeune in real time.”

Her clients and their families attribute ongoing migraines, neurological issues, gastrointestinal issues and seizures to the water contamination.

The suit was filed under the Federal Tort Claims Act, according to a brief, and charges the government with “negligence, nuisance, medical negligence, failure to treat, delayed care, and infliction of emotional distress.”

“The disruption to people’s lives, very real,” she added. “Illness, not just the illness that has happened already, but the risk of illness in the future, and the medical monitoring that these families need for the rest of their lives.

“I understand the strategic value of fuel on Hawaii, but I do not believe that it needs to be in the Red Hill tanks,” Army Maj. Amanda Feindt said. “Those things have been leaking since they truly existed.”

Feindt is among the original filers and has since gotten a change of assignment. She said she moved to Hawaii in July 2020 and began experiencing symptoms after moving on base in May 2021.

Baehr said many of her clients began experiencing symptoms before the November spill and continue to remain sick or have gotten sicker.

The Navy spilled approximately 1,600 gallons in May 2021, and then nearly 20,000 gallons more in November. Navy’s investigators say the amount of fuel released to the environment in May “cannot be calculated, but is assessed to be small” (Greenwire, Sept. 15).

Feindt said she, Baehr, and fellow plaintiffs Katherine McClanahan and Meredith Wilson — two military spouses who are among the hundreds in the pipeline to file — came to Washington last week after being “nothing but dismissed” by senior military members.

While in Washington, the group met with Undersecretary of the Army Gabriel Camarillo and Surgeon General of the Army Scott Dingle, as well as a slate of senators and representatives.

Baehr said those meetings were to call for transparency and treatment for her clients and military families.

The Honolulu Star-Advertiser reported that the Navy discarded hundreds of water samples taken from homes prior to the system being flushed without testing for petroleum.

“We have to have transparency,” Baehr said. “What was in the water? What are the test results we actually have?”

“The Department of Defense and the United States Navy remain focused on the health and safety of our military families and the people of Hawaii, and I have confidence that RADM Wade will continue to do everything to protect the population, the environment, and the security of the nation,” Austin said in a statement.

Austin said while leading the task force, Wade’s “sole responsibility” will be to ensure that the Red Hill facility is defueled in a “safe and expeditious” manner. The facility stores up to 250 million gallons of fuel 100 feet above the island’s drinking water aquifer.

Baehr said that it is important that the task force also focuses on providing treatment for affected military members and their families.

“The first thing that this joint you know, this joint task force has to do is to recognize that there are sick people right now who need treatment right now,” Baehr said.