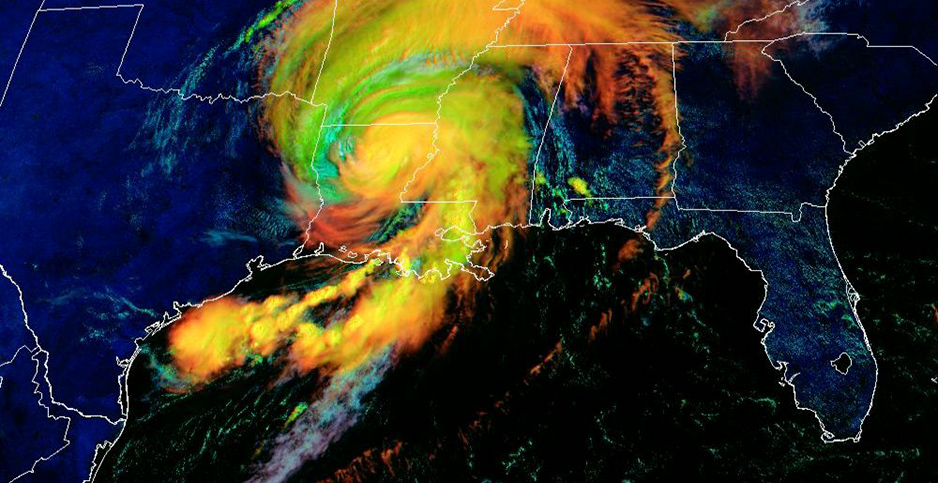 Hurricane Laura plunged into the southern U.S. yesterday as it moves toward the Mid-Atlantic after making landfall. cdn.star.nesdis.noaa.gov

Ranking hurricanes in the Gulf of Mexico has for years meant placing Katrina at the top of a grim list. The 2005 storm killed more people than any other in almost a century.

Measured by damage, Katrina was also the costliest U.S. storm before 2017’s Hurricane Harvey, which also ranks as the wettest in history.

Now the list of record-setting Gulf storms has a new member.

Hurricane Laura will exceed both Katrina and Harvey in one critical metric — sustained wind speed.

Only one other Louisiana storm matches it, the 1856 "Last Island" hurricane, which also packed maximum winds of 150 mph. Just four other U.S. storms have recorded higher winds at landfall than Laura.

"Regardless, we’re splitting hairs here. It’s going to rank at or very near the strongest storms to ever hit Louisiana," said Barry Keim, the Louisiana state climatologist and co-author of "Hurricanes of the Gulf of Mexico," a history of Gulf storms from the 19th century through Hurricane Ike in 2008.

Does it matter where Laura lands in the mix?

Scientists have known for years that climate change is making hurricanes more powerful and destructive. Warmer waters along the Atlantic and Gulf coasts provide more energy to storms, and rising seas create storm surges that can be orders of magnitude higher than in past hurricanes.

More recently, scientists have observed storms rapidly intensifying over relatively short periods of time and distances. That was the case with Hurricane Michael in 2018 and now Laura.

"Specifically, near Louisiana, I haven’t seen this kind of rapid intensification from Category 1 to 4 just close to landfall," said Hiroyuki Murakami, a tropical cyclone expert at NOAA.

While no two hurricanes share matching characteristics, even across centuries, it has taken only 15 years to break records, or nearly so, that have lasted 180 years with regard to the three defining metrics of hurricanes: surge, rainfall and wind speed.

All occurred in the Gulf of Mexico.

Katrina’s storm surge was between 24 and 28 feet along coastal Mississippi. That’s the highest ever recorded in the Western Hemisphere, according to NOAA. The storm overtopped New Orleans’ outdated levees and flood walls, eventually killing more than 1,700 people.

Harvey, 12 years later, dumped 60.6 inches of rain at Nederland, Texas, the most for any landfalling tropical system. It killed 105 people and destroyed 300,000 structures.

And yesterday, Laura completed the trifecta with its maximum wind of 150 mph at Cameron, the highest recorded in Louisiana and tied for second- or third-highest in the Gulf behind Michael in 2018.

Hurricane Camille landed on the Mississippi border with Louisiana in 1969 with maximum sustained winds estimated at 200 mph, but no official records exist because the storm destroyed all wind-measuring instruments, according to NOAA.

The National Hurricane Center defines a "rapid intensification" event as a hurricane that increases its wind speeds by at least 35 mph in a 24-hour period. Experts say several factors contribute to that process.

In addition to warm water, hurricanes favor lower wind shear and minimal changes in wind speed or direction at different heights in the atmosphere. Laura benefited from both, accelerating its wind speed by a whopping 65 mph over 24 hours.

All of them occurred within a four-year period.

Laura’s storm surge was also a significant factor in the storm’s destructive power, as stronger winds tend to pile up water as they move toward the shore.

As Laura approached the coast Wednesday, the National Hurricane Center warned of a 15- to 20-foot "unsurvivable" storm surge that could penetrate up to 40 miles inland.

Reports from Lake Charles, La., indicated that the surge there was closer to 5 feet. Information for points east of Cameron, including low-lying areas expected to see the highest surges, was still being collected yesterday afternoon.