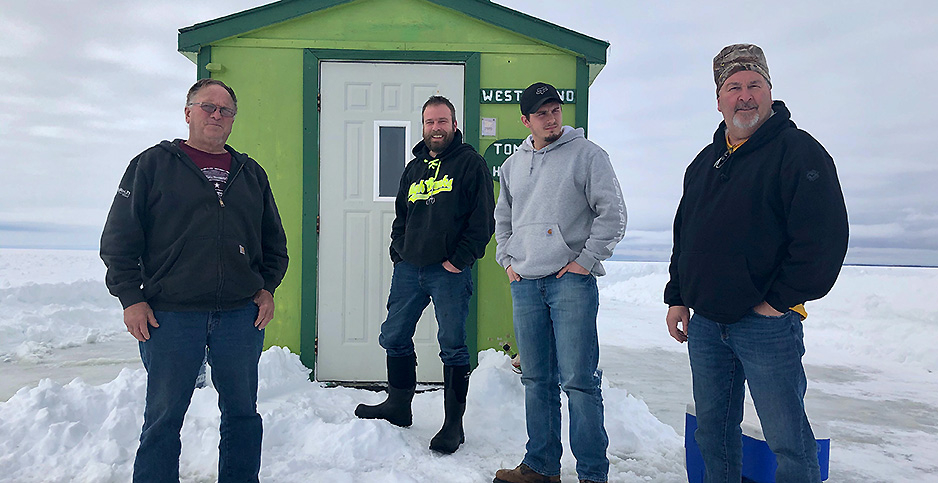 BEMIDJI, Minn. — Thick ice and subzero temperatures are money in the bank for this small Minnesota city roughly 100 miles from the Canadian border. Its winter economy thrives on a uniquely frigid activity — catching fish from holes drilled through lake ice.

But while Lake Bemidji is chock-full of fish this winter, not a single fisherman occupies its 7,000-acre frozen surface. The ice is too thin. The snow is too deep. Mid-January temperatures are hovering around 28 degrees Fahrenheit. Bemidji’s favorite winter pastime has ground to a halt.

Experts say climate change is tightening its grip on one of the coldest regions in the Lower 48 states.

More than just a change in the weather, northern Minnesota’s natural, cultural and even spiritual norms are shifting under climate change. It does not mean extreme cold will disappear from regions where ice fishing, outdoor hockey, snowmobiling and lake ice surfing are woven into the fabric of life.

"Every year is different," said John "Cookie" Halverson, owner and operator of Cookie’s on Upper Red Lake, an ice fishing outfitter about an hour north of Bemidji. "This year it’s not enough ice and too much snow. Next year it could be something else. It’s stressful because you’re fighting nature every day."

When asked if he and his clients discuss the role of climate warming in such changes, Halverson pulled up short. "We don’t talk about that, no. People come up here to fish, not talk."

But scientists are talking about climate change and ice fishing.

A recent study in the journal Limnology and Oceanography Letters provides what researchers say is the first empirical evidence of a winter warming effect on ice-dependent activities. Such warming "has the potential to influence parts of the social network, economy, food security, and overall wellbeing of northern communities," said the researchers, led by University of Minnesota biologist Lesley Knoll.

Matthew Breuer, owner of Northcountry Guide Service in Bemidji, doesn’t need empirical evidence. He has witnessed firsthand the disruption climate change is bringing to the region both in winter and summer, and he’s not afraid to say it.

"We’ve been taking people out on these lakes for almost two decades, and I’ve never seen conditions as poor as they are now," Breuer said in a telephone interview last week. "What I don’t understand is how people aren’t grasping it in a year like this when you look at [Lake] Bemidji and you don’t see hundreds of [fish] houses.

"I’m not trying to start a debate, but when I ask people, ‘What do you attribute this to?’ they say it’s just a weird winter. And, of course, they’re all scientists," he added with a dose of sarcasm.

Discussions about climate change in places like Bemidji can be tough.

Locals prefer the term "global warming," in part because it conjures up the absurdity of balmy winters in northern Minnesota.

Reluctance to acknowledge the effects of climate change extends beyond Bemidji, the region’s largest city and home to Bemidji State University, where climate science is widely accepted by students and faculty.

The city of Bemidji has also embraced climate change action through a 2018 resolution acknowledging climate science and pressing for policy action at the state and federal level.

But in resort lodges, restaurants and fish houses across the region, climate change is a non-starter.

"That’s a touchy subject for some people," said Josh Bullivant, co-manager of Trappers Landing Lodge, a resort about 35 miles southeast of Bemidji on Leech Lake, one of the state’s largest.

What fishermen do talk about, Bullivant said, is an uptick in unusual weather events and rapid transitions between frigid cold and unseasonable warmth during peak ice fishing season. Yesterday, for example, Bemidji was sitting in the midteens Fahrenheit, a normal January day. Sunday’s forecast is for 35 F with sunshine. Jackets will be off.

"You’re just seeing more of the extremes now," Bullivant said. For example, "we’re under more snow than northern Michigan right now. That’s not what we see in most years."

Deep lake snow is consistent with expected climate change effects in Minnesota. And it is the primary cause of the lousy ice conditions on Bemidji and other area lakes, experts say.

That’s because snowstorms, which tend to happen in early and late winter, now are occurring during the prime ice fishing months of late December and January. And whereas dry north winds used to howl over the lakes in January — clearing away accumulated snow — today the region is experiencing more moisture-laden weather fronts from the south.

The result is deep, heavy snow that insulates lake ice from cold air and adds considerable weight to underdeveloped ice below. The downward pressure of that snow can cause ice fishing holes to geyser, flooding fish houses and covering ice roads with water and slush.

Fishermen who drive heavy-duty pickups on ice roads and tow large "wheel houses" — some of which weigh as much as 6,000 pounds — onto weak ice also put themselves and their rigs at much higher risk of falling through.

On a driving tour of a Bemidji-area lake considered to have better-than-average ice conditions, Northcountry guide Justin Spaude gave a casual but clear instruction to his passenger. "Go ahead and take off your seat belt."

The "why?" was crystal-clear — a quick escape if the ice cracked.

Asked if he thought climate change was driving up the risk of ice failure, Spaude said, "The mindset of Minnesotans up here is it’s not a big deal."

Henry Drewes, northwest regional fisheries manager for the Minnesota Department of Natural Resources, said he believes climate change is real. He’s lived in Bemidji for 30 years and said he’d never seen the lake so empty in January. But he attributed it to heavy snow, not higher temperatures.

"We were forming really good ice across much of Minnesota" in early winter, Drewes said. "But before that ice could get adequately thick, we received more than adequate snowfall" — about 60 inches over the state’s northern reaches.

As for climate change’s role in this year’s slump in ice fishing, Drewes said he "wouldn’t go there," noting the region’s "tremendous weather variability" year to year. But he acknowledged that wetter-than-average conditions across northern Minnesota over the last several years "may fit the climate change case really well."

At Northwoods Bait & Tackle on Lake Bemidji’s northwest corner, employee Will Pappenfus said live minnow and jig sales were much slower than in previous winters. "A lot of people just can’t get out there," he said. "A lot of them have written the season off and are looking to spring."

He said much of the bait shop’s current business comes from anglers passing through Bemidji on their way to more northern lakes like Red Lake and Lake of the Woods.

Among them: a foursome from Iowa, huddled in a 12-by-8-foot rented fish house 3 miles from the shore of Upper Red Lake. They were on an annual family ice fishing vacation that brought them to the West Wind Resort in Waskish, Minn., 40 miles from Canada.

Joe Feld and his dad, Paul, along with two sons-in-law, spent the previous night fishing, talking and drinking Busch Light — a ritual they’ve repeated for 12 years. Their primary interest in ice fishing, besides fish, is "camaraderie" and seeing other family members from as far away as Texas.

"We come the same weekend every year, and we feel safe out here," Joe Feld said when told about poor ice conditions to the south. Feld said he believed the climate was in flux, noting that in Cedar Rapids, Iowa, it was subfreezing on Halloween and 60 F on Christmas.

Yet the consensus among the four men was that climate change is more of a natural cycle than a worsening condition that eventually could end their annual ice fishing trips.

Nick Rundle, 37, said he’s fished on the ice since he was 10 years old, and he expects to keep doing so for decades more.

"It’ll be here in 50 years," he said. "I don’t see this sport being affected [by climate change] in my or my children’s lifetime."