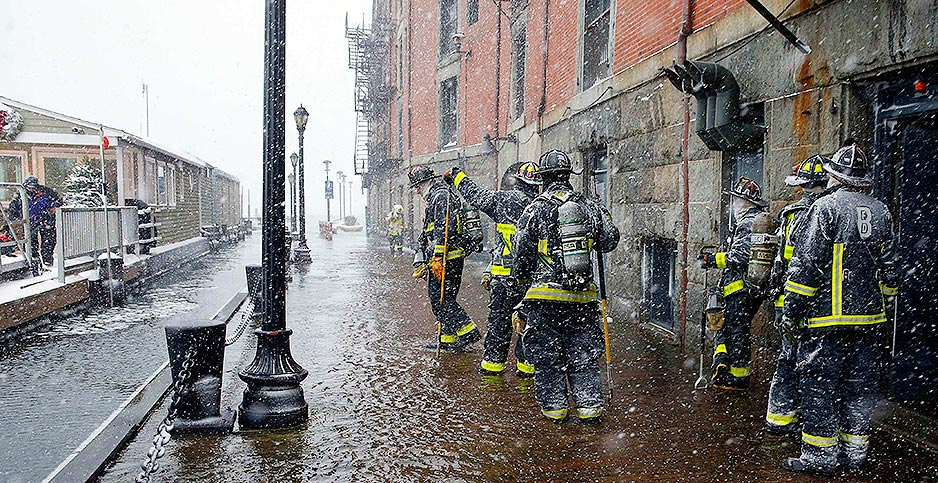 Boston firefighters worked at the scene of flooding from Boston Harbor last week as a massive winter storm swept from the Carolinas to Maine. Michael Dwyer/Associated Press

In Boston, the "bomb cyclone" last week will be remembered less for its brutal temperatures than for a tidal surge that dumped millions of gallons of icy seawater into the city center, inundating streets and floating dumpsters out of alleys.

Officials are still assessing the flood damage that extended along a substantial portion of the urban waterfront, where a wall of water rose from Massachusetts Bay and slammed into Boston Harbor shortly after noon on Thursday. It broke a high tide record going back at least 40 years.

New Englanders are used to powerful nor’easters. They can arrive in winter and unleash hurricanelike conditions along the state’s frozen coast. But this storm packed a punch like some had never seen before, and it came as another stark reminder of Boston’s vulnerability to climate change.

"If anyone wants to question global warming, just see where the flood zones are," Mayor Marty Walsh said Thursday, hours after the city experienced a high tide of 4.89 feet above average. "[Some of] those zones didn’t flood 30 years ago. … We have concerns, and we’re going to stay on top of it."

The concerns extend beyond the health and safety of residents and workers, thousands of whom occupy the city’s historic waterfront, from the bustling Seaport District and North End neighborhood to former industrial zones like East Boston.

Getting a handle on waterfront flooding in an era of sea-level rise is a critical component to Boston’s economic development. The city is trying to retain and recruit Fortune 500 companies like Amazon.com Inc., which is reported to be considering the city for its much-touted second headquarters, or "HQ2."

To protect low-lying areas against flooding and other risks from climate change, officials in 2015 launched "Climate Ready Boston," a planning blueprint for waterfront districts that have high development potential but are vulnerable to storm surges and localized flooding from high tides and heavy rains.

The first in a series of reports, focused on East Boston and Charlestown, was released last October and calls for a number of engineered solutions, including elevating a major arterial street in Charlestown to act as a berm against floodwater, and installing a deployable 7-foot-high flood wall across what is known as the East Boston Greenway, a former rail corridor that today is a bike path linking several city parks and open spaces. A similar planning effort is getting underway in South Boston.

Austin Blackmon, Boston’s chief of environment, energy and open space, said such measures are core components of the city’s climate change protection and economic development goals, and that investing the millions of dollars necessary to harden the waterfront is essential to drawing new investment.

"We’ve been working on these things for some time now because we recognize that Boston is one of the five most at-risk cities in the U.S. in terms of vulnerability to climate change," Blackmon said in an interview.

By the end of the 21st century, climate models indicate that the Boston area will experience 3 feet of sea-level rise, enough to place roughly $80 billion in city real estate and infrastructure within the federally designated floodplain.

Blackmon expects that Boston will endure $1.4 billion in flood-related damages every year, a budget-busting scenario that would effectively require the abandonment of some waterfront areas.

Instead, he said, the city is taking proactive steps to better understand the flood dynamics of a 3-foot rise in sea levels. Some of these solutions involve re-engineering existing infrastructure, such as raising a roadway, or updating building codes to require that critical systems, such as heating and cooling, be elevated above the flood zone.

Among the development sites that have received a high degree of climate resilience study are the 161-acre former racetrack known as Suffolk Downs in East Boston. It’s at the heart of the city’s Amazon HQ2 proposal.

Another one is General Electric Co.’s new $200 million headquarters, in the early stages of development on 2.4 acres of waterfront property at the southern edge of downtown. The GE site, which abuts a major inlet known as Fort Point Channel, was among the most severely flooded areas of the city during last week’s nor’easter.

A GE spokesman confirmed in an email that part of the development site experienced some flooding, leading to a temporary suspension of construction activities and additional measures to protect equipment from rising water. He said the site experienced no major damages.

When completed, "GE is making sure the campus is ready for the effects of our changing climate, including sea level rise," according to planning documents for the site. For example, first-floor elevations of the headquarters’ buildings will be 19.5 feet above mean high tide, offering protection against a projected 500-year storm event in 2075.

Officials like Blackmon say climate-resilient development projects such as GE’s, along with similar private and public investments in other waterfront districts, should provide new benefits to existing businesses and residents who have also seen their vulnerabilities to climate change rise in recent years.

"We know we can’t stop flooding in low-lying areas," Blackmon said. "But where we can put in a flood wall or a raised road that plugs into a specific area, now you’ve got district-level protection for entire neighborhoods, and that’s going to make a big difference for many thousands of people."