In Colo., charting a new path away from floodwaters 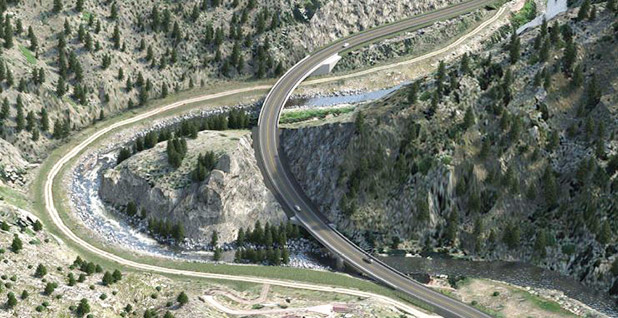 A bridge near Longmont, Colo., was built to reduce the threat of damaging floods. Kiewit Infrastructure Co.

The view from Stoney River Lodge, just off U.S. 34 between Loveland and Estes Park, Colo., is what owner Linda Napier calls a slice of heaven carved from ancient rock.

The steep ledge of Palisade Mountain rises just across the highway, while the sound of water crashing over boulders in Big Thompson River often fills the piney mountain air.

But today Napier and her guests look out upon a closed road, dust clouds and a river muddied with silt.

"I had some guests last week, but nobody is coming on their own yet," Napier said in a recent telephone interview. "They say we were allowed to open for business on May 1, but people still have to be guided in here by the state. It’s a hassle, but hopefully, we’re getting something good for it."

Such is the short-term cost of climate adaptation in the Front Range, where the Colorado Department of Transportation is rebuilding a primary conduit to Rocky Mountain National Park to withstand a future of climate instability.

State officials say their efforts will pay off in the form of heightened readiness for extreme weather events like wildfires and canyon floods that destroy roads, utility lines, motor vehicles, homes and businesses — and sometimes take lives. Memories are still sharp from the last flood in Big Thompson Canyon, in 2013, when a September cold front stalled over the east side of the Rockies, colliding with warm, moist southerly air to produce more than 15 inches of rain over a six-day span.

It was the worst flood in state history, resulting in 10 deaths — including two drownings in Big Thompson Canyon — and nearly $4 billion in property damage, including hundreds of miles of crumbled roads and collapsed bridges. The last time the canyon had sustained that degree of damage was in 1976, when a similarly rare rainstorm and flash flood overwhelmed the Big Thompson River, killing 144 people.

The 2013 flood also gave birth to the Colorado Resiliency & Recovery Office, a state agency whose mission, Director Iain Hyde said, "is to make sure history doesn’t repeat itself" in places like Big Thompson.

‘Let’s let the river have it’

Repairing the roads has cost the state more than $745 million, including more than $300 million to re-engineer roughly 17 miles of canyon highway along U.S. 34 and nearby U.S. 36, two of the most popular routes into Rocky Mountain National Park. Nowhere have the challenges been steeper than Big Thompson Canyon, where floodwaters scoured away not only pavements and guardrails but roadbeds and subsurface geology, effectively leaving sections of highway unsound and unsafe.

But with challenge comes opportunity.

Under orders from Gov. John Hickenlooper (D), who had begun aligning Colorado’s environmental policies with climate mitigation and adaptation goals, CDOT embarked on a new, more resilience-oriented approach to highway reconstruction. The 15-mile stretch of U.S. 34 near Stoney River Lodge would be a major test of those principles.

"We were given a mandate by the governor to not just build it back, but to build it back better than it was before," said CDOT spokesman Jared Fiel. "He wanted to make sure the second-largest airlift of people in U.S. history was not going to be revisited."

Adaptation required smoothing out the road’s famous Horseshoe Curve, near mile marker 78 just east of Napier’s lodge. The curve, one of the deepest bends in the Big Thompson River, has long been a tension point between river and canyon, as several million years of scouring from spring snowmelts and periodic floods have eaten into the canyon’s north wall, requiring road builders to periodically back the highway away from the river.

With the rebuild, set to be completed later this year, CDOT abandoned the old right of way, which aligned the road to the river, and instead chose to cross the canyon with a bridge that cost tens of millions of dollars more but makes the road more safe, secure and resilient in the face of future floods.

"In the case of Horseshoe Curve, we said, ‘Let’s let the river have it. She’s taken it twice before, so let’s pull back and let her have it for good," Fiel said. "You’re also reclaiming some of the natural beauty of the canyon, too, since the trip is the destination for a lot of people."

For her part, Napier is hoping the new road translates into more stopovers at her lodge, which boasts "blue ribbon trout fishing, secluded hiking trails, plenty of space for picnics and a variety of outdoor games."

She doesn’t know whether the new highway will be more resilient than the one it replaced.

"This canyon has been flooding for hundreds of years, long before any of us came in here," she said. "My view is it’s going to continue to happen. I just hope I’m not here the next time it does."