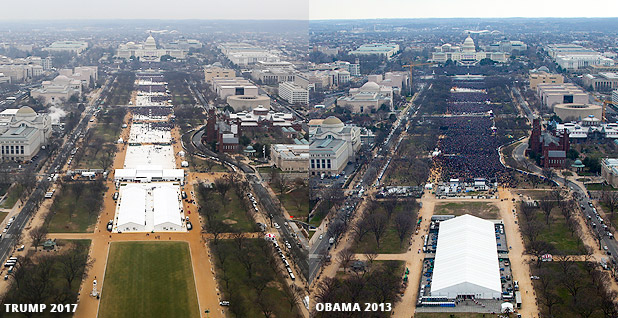 In an early-morning email Jan. 21 — the day after the inauguration — NPS spokesman Tom Crosson called the shutdown "apparently a huge miscom."

The email is among those NPS released today to E&E News regarding the agency’s retweets critical of Trump on his inauguration day.

In response to a Freedom of Information Act request from E&E News, 785 pages of emails were released late this morning. About 26 pages were withheld by the agency.

The released emails reveal confusion in the aftermath of the NPS retweets. The agency’s main Twitter account shared a photo — first shared by New York Times reporter Binyamin Appelbaum — comparing the crowds at President Obama’s 2009 inauguration to Trump’s 2017 inauguration. Some Twitter users wondered whether NPS "went rogue," as Trump made a point of denying the fact that fewer people showed up to his event.

At 5 p.m. Jan. 20 — after NPS had deleted the tweets — Frank Quimby from the Interior public affairs office sent an email to the department’s bureaus issuing a shutdown of Twitter activity.

"The new administration has said that the Department and all Bureaus are not supposed to tweet this weekend and wait for guidance until Monday," he wrote. "Please make sure that any scheduled tweets are no longer scheduled."

By the next morning, however, Crosson had spoken to Megan Bloomgren, who is now Interior communications director. Bloomgren, he wrote, indicated that Interior’s new communications team did not intend to shut down Twitter activity.

But officials continued to keep a close eye on Twitter activity. Later that same day, Crosson asked Amber Smigiel, the public affairs specialist for social media, to pass all tweets through him and Slayton.

"Amber, please, for the next 48 hours … please let April and I know what you are tweeting out from the national NPS account before you tweet it out," he wrote. "Wait for a thumbs up from us before tweeting. Regardless of topic."

By Monday, NPS officials still appeared confused about what they were authorized to say. Crosson sent out a recap of an interview with a reporter at Gizmodo, only to be reprimanded by Bloomgren.

"Before doing any future interviews like this, please coordinate with Heather [Swift] or me," Bloomgren wrote referring to then-Rep. Ryan Zinke’s spokeswoman, who is now Interior’s press secretary. "I don’t understand why this interview was granted. This falls into the administration and policy related items that you and I (and then April and I) spoke about coordinating on before granting (for interviews)."

A Park Service internal memorandum, titled "Twitter retweets during inauguration," laid out a timeline of who became aware of the suspicious tweets and when.

According to the memo, press officials at the agency were contacted by "multiple trusted sources" around 4:40 p.m. on Inauguration Day sharing concern about the retweets. They began to check with others outside of Washington to identify the source of those retweets.

By 5:10 p.m. that day, Interior’s communications office sent a directive to all bureaus to immediately stop tweeting. By the following day, the Park Service received guidance that it could start tweeting again, leading to its apology tweet. NPS staff also began changing their passwords and reviewing who has access to social media accounts.

The memo also noted a "possibly related park Twitter intrusion." A social media manager at the Seattle unit at the Klondike Gold Rush National Historical Park received an automated email from Twitter asking whether she had changed her password. It indicated that the password had been changed from an IP address in Santa Cruz or Santa Clara, Calif.

"The IP that posted our retweets was from the San Bruno area, which is about an hour away from those locations," said the memo. "[Park Service press staff] is concerned that this proximity and the related nature of these two incidents may not be a coincidence. NPS IT security has been provided this related information."

Informed of that information, Slayton expressed surprise in a separate email.

"Wow – I had a gut feeling that these two things were not separate, but whether it was a hack or not, this is pretty serious," Slayton said. "Have you thought about former NPS staffers who might still have had access to our password?"

‘Is that what happened?’

NPS officials initially suggested placing blame for the controversial pair of tweets on an unnamed employee who had accidentally posted from a personal account.

"The previous 2 posts were inadvertently sent from a personal account and we are investigating the matter," Smigiel wrote in an email around 5:30 p.m. Jan. 20.

"Is that what happened?" Slayton responded.

Smigiel, who acknowledged that numerous other employees had access to NPS’s primary Twitter account, responded that she did not actually have confirmation of such a mistake.

"I believe so. No one would think it was their job to Tweet for NPS today and I can’t imagine anyone trying to sabotage my career either so it’s the most likely scenario," she said. "I did retweet the Wilderness Society tweet this morning but I didn’t put anything up after that."

Earlier in the day, Slayton pressed for a conference call among the NPS social media employees.

"The two tweets posted to the national account today are not appropriate at all, and I need a clear understanding about why the decision was made to post them. How soon can we get on a conference call?"

As for the 26 pages of emails NPS withheld from E&E News, the agency said they "do not contain or represent formal or informal agency policies or decisions." They were withheld under FOIA’s Exemption 5, otherwise known as the "deliberative process" exemption.

"They are the result of frank and open discussions among employees of the Department of the Interior. Their contents have been held confidential by all parties and public dissemination of this information would chill open and honest discussions," said the agency’s response letter to E&E News.