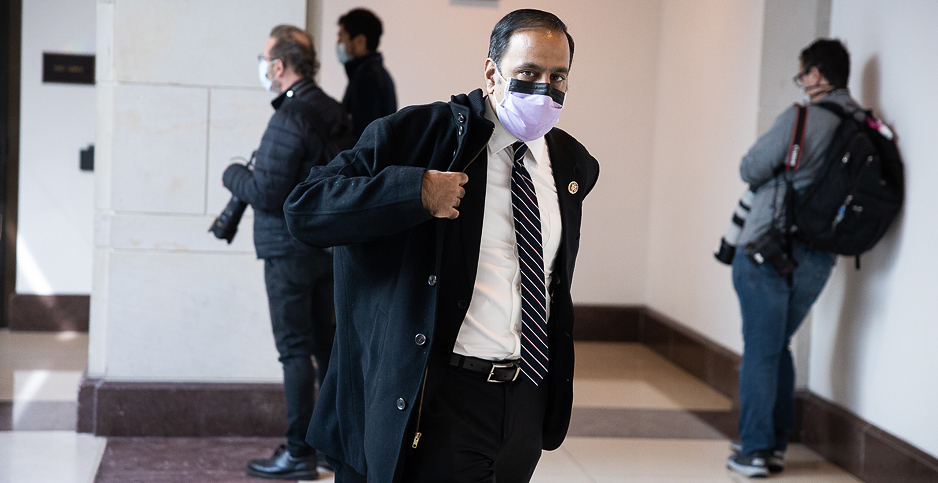 A House report detailing the high heavy metal contents of popular baby food brands shocked parents last month, leaving them feeling duped by the very companies they depend on to feed their kids.

Raja Krishnamoorthi is one of those parents. He also leads the Oversight and Reform Subcommittee on Economic and Consumer Policy that investigated the issue and is now working on legislation to fix the problem.

"Isn’t it crazy?" the Illinois Democrat asked during a conversation with E&E News this week.

A father of three, Krishnamoorthi described his family as a "profit center for baby food companies."

"Like all parents, we assumed that no company would sell any product that would be unsafe for a baby and that the government would not permit any company to do so," he said. "Unfortunately, we were horribly wrong about both assumptions."

The subcommittee’s investigation looked at data from four popular baby companies and found "significant" levels of neurotoxins like lead, cadmium, mercury and arsenic in foods produced by each of them.

Arsenic in rice products was particularly high across all brands, the report found, and although the companies have internal limits on heavy metals in their products, some continued to sell baby food made with ingredients exceeding those levels.

The report also revealed that the Food and Drug Administration did not react after one of the baby food companies — Hain Celestial Group Inc. — told officials that testing for heavy metals in ingredients was likely underestimating levels in finished products (Greenwire, Feb. 4).

"You know very well how much trust we put in these types of products that are sold, and to find that in some ways our trust is so violated is very disturbing," said Krishnamoorthi, whose children are 4, 11 and 15. "I think that the companies are going to have some explaining to do to their customers."

The FDA will, too.

Krishnamoorthi is working on legislation with co-sponsors Rep. Tony Cárdenas (D-Calif.) and Sens. Tammy Duckworth (D-Ill.) and Amy Klobuchar (D-Minn.) that would set maximum levels for inorganic arsenic, cadmium, lead and mercury in infant and toddler foods, and require companies to test finished products — not just ingredients — for heavy metals and publish the results.

What’s more, it would give the FDA recall authority over products and fund a public awareness campaign and grants.

The sponsors contacted the FDA yesterday asking the agency to provide technical comments on limits the bill would set on heavy metals.

"Like parents all across America, I was horrified to learn that trusted baby food brands knowingly sell products containing high levels of toxic lead, arsenic, mercury and cadmium," Cárdenas said in a statement.

"I urge the FDA to use its existing authorities to take immediate regulatory action," he said. "Parents should not have to worry about whether the baby food they purchase contains dangerous toxic metals like lead and arsenic."

When it was released last month, the subcommittee report made national headlines, with morning talk shows discussing the heavy metal contents of various brands.

Though he expected the report to receive some attention, Krishnamoorthi said he was surprised by how it "pierced through all the noise that’s in our daily news and got to parents in the way that it did."

His office even received a letter from the mother of a childhood friend from Buffalo, N.Y., "basically saying, ‘Remember us?’" which included a local news clipping about the report.

"I’m sure she’s a grandma now, so it’s really just spread all over the place," Krishnamoorthi said. "But it makes sense because there are few things as precious in your life as your baby, and I think that parents and grandparents have very sensitive antennae when it comes to issues like this, as they should."

Many parenting blogs responded to the subcommittee’s findings by counseling parents not to take any knee-jerk reactions, reminding them that the FDA does not regulate heavy metals in most food and telling parents that switching kids to snacks other than rice cereal or pureeing fruits and vegetables at home wouldn’t necessarily limit children’s exposure to the neurotoxins.

Krishnamoorthi disagrees with that advice, saying he would move babies’ diets away from rice cereal in particular because of their universally high arsenic content across multiple brands.

He also took issue with the advice’s implications that because heavy metal contamination is a systemic issue, there is nothing that parents can do about it. Rather, he said, he will be depending on parents to "exercise their voice" and support his legislation.

"I can’t tell you how powerful parents can be on Capitol Hill if only they exercise their advocacy powers and make sure their voice is heard," he said. "I am asking them to stand with us in pushing these reforms."

Subcommittee staff began looking into the issue of toxic substances in baby foods two years ago, after the nonprofit Healthy Babies Bright Futures published its own report examining heavy metals in baby foods the group purchased directly from grocery stores.

The group found heavy metals in 95% of the 168 baby foods it tested, and 1 in 4 baby foods contained all four of the heavy metals — arsenic, lead, cadmium and mercury — that the group tested for.

The group’s research director, Jane Houlihan, applauded the subcommittee report for confirming work done by consumer organizations to shed light on the issue.

Overall, she said, the report showed that "even though companies are paying attention and starting to test for heavy metals, without federal standards the companies’ responses are just all over the board."