‘It’s all around us.’ Why U.S. fails to prepare for crises 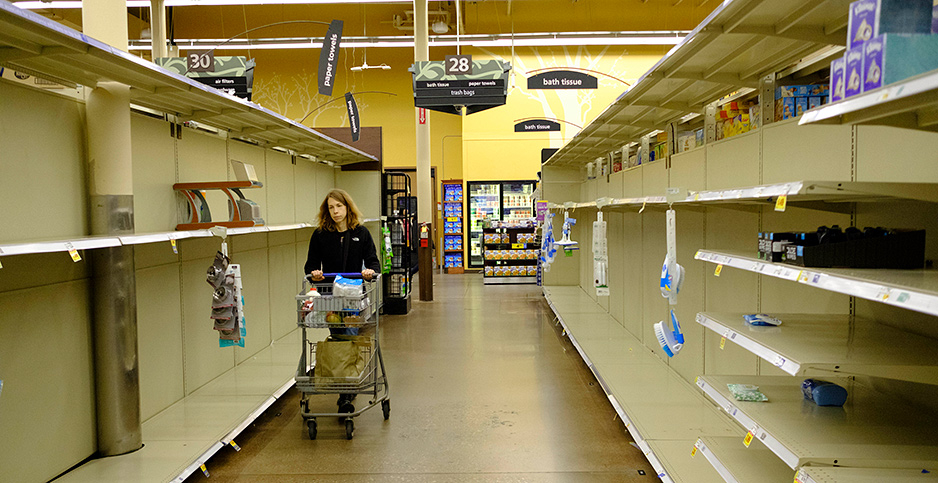 Americans have adapted quickly to avoid the coronavirus. A woman searches for supplies in Bloomington, Ind. Jeremy Hogan/Zuma Press/Newscom

The coronavirus pandemic is not a climate crisis. But what if it were?

Experts say global health emergencies can impart important lessons — and warning signs — about how to respond and adapt to climate change.

Both phenomena are scientifically complex and confusing. They also reach across geographies, economies and social strata.

For some, the parallel is clear.

"Imagine that we were facing a global-scale calamity and the experts had been warning us about it for some time, but the expert advice is mostly overlooked," said Howard Frumkin, a professor emeritus of environmental and occupational health sciences at the University of Washington and an expert on public health and climate change.

"What would we do in that kind of situation? The answers are not easy, but it pretty much describes coronavirus, and it also describes climate change. This outbreak raises interesting questions about how well equipped we are to confront a disaster when it’s all around us."

Adaptation, by definition, is a "change by which an organism or species becomes better suited to its environment." That process can happen quickly, as in the aftermath of a wildfire or hurricane — or more slowly with phenomena like sea-level rise or the upward creep of average temperatures.

So far, the U.S. response to COVID-19 has in many ways mirrored the country’s response to climate change, experts say. Those responses — both institutional and by individuals — reflect long-standing American culture as well as recent expressions of isolationism and the devaluation of science.

President Trump at first dismissed the realities and seriousness of COVID-19, repeating a pattern he has exhibited with climate change. He referred to the new coronavirus as "a hoax" perpetuated by Democrats and the media, and a phenomenon over which the government has little control.

He has also called the coronavirus a mysterious problem that will disappear on its own or "wash out" of the United States, undermining scientists and health officials who were trying to prepare the nation for an outbreak.

"While scientists are trying to share facts about the epidemic, the administration either blocks those facts or restates them with contradictions," H. Holden Thorp, editor-in-chief for science journals at the American Association for the Advancement of Science, wrote in a recent editorial.

And with other crises, Trump prefers to cast the COVID-19 pandemic as a foreign enemy, and he is quick to blame other countries for its spread. He often calls it a "Chinese virus."

The World Health Organization, which in January identified climate change as one of 20 urgent global health priorities, said such analogies fail to account for the unique risks and behaviors associated with the spread of infectious disease.

"Countries invest heavily in protecting their people from terrorist attacks, but not against the attack of a virus, which could be far more deadly, and far more damaging economically and socially," WHO said in its most recent report on urgent health challenges for the 2020s, which include climate change.

But Trump has offered no long-term measures to adapt to pandemics or bolster the country’s resilience to crises related to climate change.

"Urgent response is needed on both climate and the pandemic," Andrew Norton, director of the International Institute for Environment and Development and an expert on the politics of climate change, wrote in an op-ed last week. "Maybe the immediacy of the threat of coronavirus will make it easier to find that urgency. … If handled badly, the pandemic could suck the energy out of public action and public policy as prosperity declines."

The same has been said of climate change, particularly under the Trump administration, which Frumkin described as politically and ideologically bound to the fossil fuel industry.

In the absence of an effective federal response, states and cities have developed and implemented near-term strategies, including shelter-in-place orders; cancellations of large public events; and the mandatory closure of restaurants, health clubs and other publicly accessible venues.

"In some ways, coronavirus is a great democratizer. Everybody gets sick, and the most vulnerable get sicker because they don’t have a cushion to fall back on," Frumkin said.

"We’re seeing the same thing with climate change. Those who are facing the greatest risk are often the least-equipped to protect themselves. We need to be thinking about that as we consider impacts and mitigation strategies for various populations."

And yet not all adaptation strategies involve action by governments or institutions.

In many cases, adaptation occurs as people react to a crisis and take measures to protect themselves. Sometimes they balance their immediate personal needs against societal needs.

"It’s really a question of solidarity versus every person looking out for himself or herself," Frumkin said. "We’ve already seen great examples of generosity as people help their neighbors and even strangers get through this crisis. But we’ve also seen a phenomenal selfishness in price gouging and the hoarding of basic goods."

Similar themes play out around climate change when people make lifestyle decisions that provide immediate, short-term satisfaction even as those decisions run counter to reducing greenhouse gases and slowing the environmental damage caused by climate change.

"It’s a fundamental theme of human nature, and it’s bigger in American society than many others," Frumkin said. "When we face big societal-scale problems that need to be solved by collective action, are we willing and culturally inclined to do that?"