Ivanka and Jared saved the Paris Agreement — for now 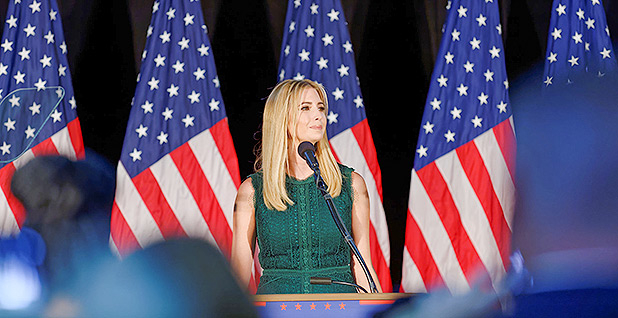 Ivanka Trump and her husband, Jared Kushner, may be helping behind the scenes at the White House to preserve the Paris Agreement. Photo by Michael Vadon, courtesy of Flickr.

The suggestion of a shift in position comes after Jared Kushner and his wife, Ivanka Trump, two close advisers to the president, worked to remove references to the global climate deal from a new executive order, according to a source. The measure, aimed at dismantling carbon policies initiated by the Obama administration, is expected to be released soon but no longer contains language opposing the Paris Agreement.

Moving to quit the international pact is increasingly seen by Republicans as a knottier effort than staying in and, instead, potentially downplaying U.S. commitments struck by the former administration on reducing greenhouse gas emissions. The agreement isn’t legally binding.

"The question is, for businesses, is it worth the political and economic capital that you would have to invest to take the U.S. out of Paris? I think the answer is probably no," said Frank Maisano of Bracewell LLP, a firm representing energy companies.

As a candidate, Trump pledged to "cancel" U.S. involvement in the global pact, which entered into force in November with a goal to keep temperature rise "well below" 3.6 degrees Fahrenheit from preindustrial levels. Trump described it as "bad for U.S. business" and said the deal allows "foreign bureaucrats" to decide how much energy Americans can use.

Trump modified his views after the election, telling The New York Times that he has an "open mind" about the agreement struck in Paris. Spicer declined yesterday to reaffirm the president’s past commitments for withdrawal when asked about it by E&E News.

He directed inquiries to Secretary of State Rex Tillerson, who suggested during his confirmation hearing last month that the United States might be better served by remaining a member.

"I will leave that to Secretary Tillerson," Spicer said yesterday. "That’s a conversation that he’s having with [Trump] as far as where we are on that."

An official with the State Department indicated last night that no decision has been made about withdrawing from the 196-nation agreement, which was recently lauded by an executive with Exxon Mobil Corp., of which Tillerson was CEO until January, as an admirable effort to confront the "global challenge" of climate change.

The State Department official said the agency "continues to review" the Paris Agreement.

The efforts by Kushner and Ivanka Trump to remove antagonistic language about the agreement from the upcoming executive order seem to support perceptions that the couple is a moderating influence on the president, who has described global warming as "bullshit" and a "hoax."

The Wall Street Journal first reported the involvement of Kushner and Ivanka Trump. A source said the couple successfully worked to remove the language about a week ago.

The executive order once targeting the Paris Agreement is a broad directive to agencies to increase fossil energy development. It calls for a review of the Clean Power Plan, implemented under former President Obama to cut carbon emissions from power plants 32 percent by 2030. The Supreme Court stayed the rule in February 2016.

The executive order also "knocks out" Obama’s Climate Action Plan, a broad framework issued in 2013 for carbon reductions across several economic sectors, according to a source. It also targets a moratorium on new coal leases on federal land, enacted under Obama.

Some environmental groups were encouraged by the idea that Tillerson’s influence over climate policy could be growing. These same groups aggressively opposed the former oilman’s nomination as secretary of State, arguing that he could use his position to reward the fossil fuel industry as much as the American people.

"Rex Tillerson was and remains unfit for this office, but he could still salvage this country’s global standing by ensuring that the United States honors its commitments to the Paris Climate Agreement," said Naomi Ages, a climate specialist with Greenpeace.