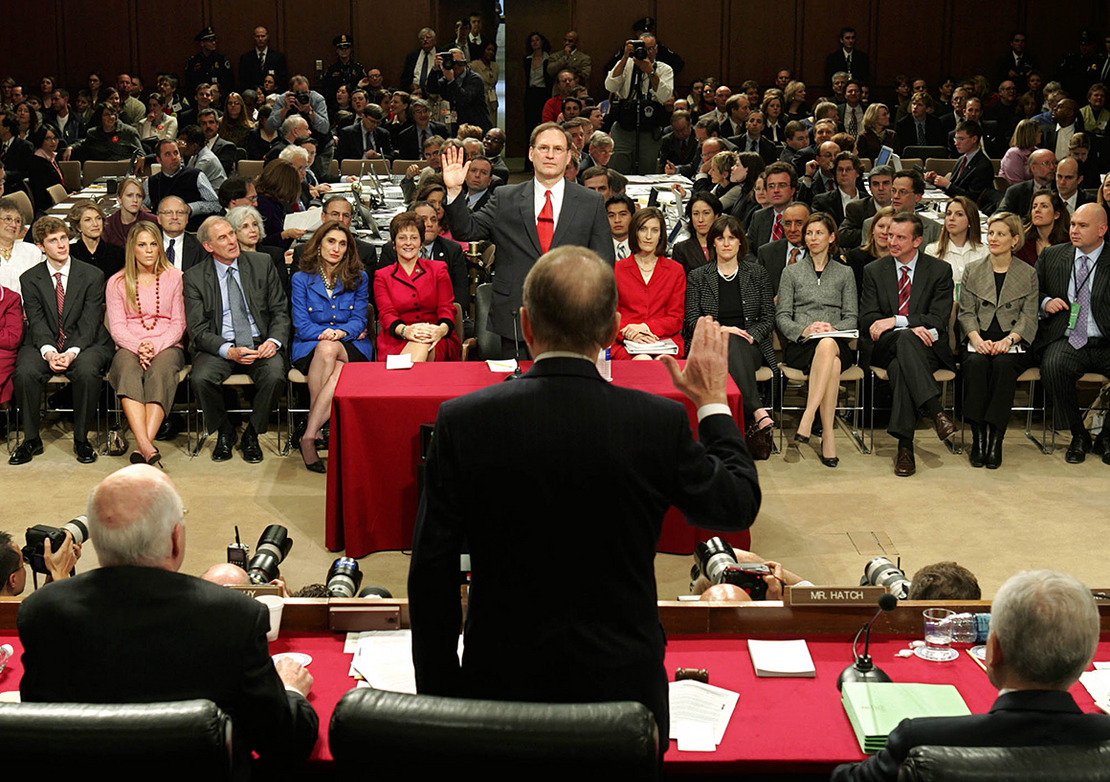 Grilled on camera in a hearing room on Capitol Hill, Supreme Court nominees over the years have extolled the value of stare decisis, the legal principle of keeping prior rulings in place.

But in a colossal 5-4 ruling issued Friday, a majority of the conservative justices on the high court overturned Roe v. Wade, which since 1973 had granted the constitutional right to an abortion (Greenwire, June 26).

The apparent contradiction has infuriated some lawmakers who are accusing justices of hypocrisy during their testimony delivered under oath to the Senate.

It’s also raising doubts about the integrity of the Senate confirmation process and concerns that judicial nominees will simply tell senators what they want to hear in order to secure lifetime appointments to federal courts.

“How about those justices coming before the senators and saying that they respected stare decisis, the precedent of the court, that they respected the right of privacy in the Constitution of the United States?” House Speaker Nancy Pelosi (D-Calif.) said Friday in a news conference excoriating the court’s abortion ruling. “Did you hear that? Were they not telling the truth, then?”

Rep. Alexandria Ocasio-Cortez (D-N.Y.), on NBC’s “Meet the Press” yesterday, accused justices of lying under oath and said they should be impeached.

“There must be consequences for such a deeply destabilizing action and the hostile takeover of our democratic institutions,” she said.

During his 2018 confirmation hearing, Justice Brett Kavanaugh called Roe “important precedent of the Supreme Court that has been reaffirmed many times.”

Justice Neil Gorsuch, another appointee of former President Donald Trump, said during his 2017 confirmation hearing, “all precedent of the U.S. Supreme Court deserves the respect of precedent, which is quite a lot. It is the anchor of law. It is the starting place for a judge.”

Sen. Susan Collins of Maine said the decision the court reached Friday is “inconsistent” with what both Kavanaugh and Gorsuch said in their testimony and in private meetings with her.

In 2018, Collins gave a speech on the Senate floor to explain why she — a GOP lawmaker who supports abortion rights — would provide the key vote to confirm Kavanaugh, who had faced allegations of sexual misconduct and whom Republican Sen. Lisa Murkowski of Alaska had opposed.

“To my knowledge, Judge Kavanaugh is the first Supreme Court nominee to express the view that precedent is not merely a practice and tradition, but rooted in Article III of our Constitution itself,” Collins said at the time.

“He believes,” Collins went on, “that precedent ‘is not just a judicial policy … it is constitutionally dictated to pay attention and pay heed to rules of precedent.'”

In a Friday statement, Collins said Kavanaugh and Gorsuch had been “insistent on the importance of supporting long-standing precedents that the country has relied upon.”

Sen. Joe Manchin of West Virginia, the sole Democrat to vote to confirm Kavanaugh in 2018, issued a similar statement Friday.

“I trusted Justice Gorsuch and Justice Kavanaugh when they testified under oath that they also believed Roe v. Wade was settled legal precedent,” he said, “and I am alarmed they chose to reject the stability the ruling has provided for two generations of Americans.”

He called it a “fundamental part of our legal system” because it “limits the power of the judiciary” and reflects “the view that courts should respect the judgments and the wisdom that are embodied in prior judicial decisions.”

Alito also said, “Roe v. Wade is an important precedent of the Supreme Court. It was decided in 1973, so it has been on the books for a long time.”

The justices’ willingness to reverse course and upend precedent in this instance is “very problematic,” said Bill Snape, an environmental law professor at American University and senior counsel at the Center for Biological Diversity.

“They have further legitimized the idea of expanding the court and/or changing the process,” Snape said.

A commission appointed by President Joe Biden on Supreme Court reform said expanding the bench would be divisive (Greenwire, Dec. 8, 2021). The president himself has been hesitant to call for such a move.

The majority held that stare decisis “plays an important role” but is not an “inexorable command.” Some of the court’s “most important constitutional decisions have overruled prior precedents,” the opinion says.

Barrett — Trump’s third pick for the nation’s highest bench and the nominee who tipped the court’s ideological balance from a 5-4 to a 6-3 conservative majority — took a different tack than Kavanaugh, Gorsuch and Alito on stare decisis during her 2020 confirmation hearing.

At one point during the marathon proceedings, Minnesota Sen. Amy Klobuchar, a Democrat, asked Barrett whether Roe was “super precedent” safe from future dismantlement — a topic Barrett had previously explored in an academic paper.

“Okay, well, people use ‘super precedent’ differently,” Barrett replied. “The way that it’s used in the scholarship and the way that I was using it in the article that you’re reading from was to define cases that are so well-settled that no political actors and no people seriously push for their overruling.”

She continued: “And I’m answering a lot of questions about Roe, which I think indicates that Roe doesn’t fall in that category.”

Senate Judiciary Chair Richard Durbin (D-Ill.) said the committee will hold a hearing soon “to explore the grim reality of a post-Roe America.”