‘Keep it in the ground’ shifts tactics for Trump era 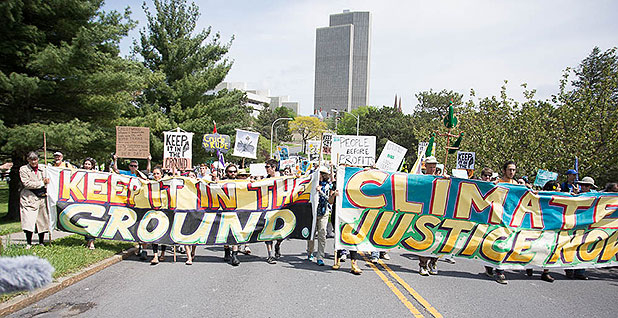 Organizers of the keep-it-in-the-ground movement, which includes more than 400 organizations from 60 countries, are figuring out how to start over in the Trump era. Photo by Resa Sunshine/A Jones, courtesy of Flickr.

In the run-up to the 2016 presidential election, proponents of the "keep it in the ground" movement appeared to be on a roll: The Paris climate agreement had been signed, President Obama had enacted a moratorium on new coal leases, and activists regularly made headlines for their efforts to push Democratic presidential nominee Hillary Clinton to commit to their cause.

But that was before Republican Donald Trump won an upset victory and the new administration began a concerted rollback of environmental regulations, including an expected repeal of the coal moratorium.

Now organizers of the keep-it-in-the-ground movement, which includes more than 400 organizations from 60 countries, are figuring out how to start over.

While the association’s aim was once to influence an administration and a president who endorsed climate policies, today it’s about how best to undermine Trump — an avowed climate change doubter — and his promises to expand coal, oil and gas production on public lands.

"The campaign is not going away. The fact of the matter is, the election did not change the physics of climate change; it is still a real and present danger," said Center for Biological Diversity Public Lands Program Director Randi Spivak.

"We obviously hold no illusion that Trump is going to — in any way — keep fossil fuels in the ground. In fact, it’s the opposite. He’s been very vocal about wanting to increase fossil fuels across public lands," she added.

In addition, groups working under the movement’s banner will focus on educating potential supporters in so-called front-line communities adjacent to production sites and pipelines, including Native American tribes and farmers.

She said organizers expect to find new backers among those communities, pointing to a recent Colorado College State of the Rockies Project poll that showed residents in seven Western states would like to see Trump’s administration limit expansion of oil and gas development (E&E News PM, Jan. 31).

"The campaign was never about shutting down existing production," Spivak said, adding that the effort remains focused on not "locking in fossil fuel dependency."

Sara Shor, who manages the keep-it-in-the-ground campaign for environmental group 350.org, likewise said her organization will turn from the White House and Congress to local regulators and stakeholders.

"We’ll be doubling down at the state and local level. A lot of these projects have decisionmakers that are not the federal government. We’ll be pushing on all those entry points," Shor said, referring to construction projects for new fossil fuel-related infrastructure, including pipelines.

Lena Moffitt, director of the Sierra Club’s Dirty Fuels campaign and its keep-it-in-the-ground efforts, said in a separate interview that work would also focus on protecting specific sites, such as Zion National Park in Utah.

Bureau of Land Management officials received more than 40,000 public comments on a proposal to lease 2,800 acres about 1 mile north and east of Zion in southwest Utah. The lease sale would take place Sept. 14 if approved (Greenwire, March 9).

"We will be amplifying opposition to inappropriate leasing in places that are particularly iconic like that," Moffitt said, pointing to the tourism and related revenue that the park generates for the Beehive State.

Similarly, Jeremy Nichols, director of WildEarth Guardians’ Climate and Energy Program, said the keep-it-in-the-ground movement will continue to "expose legal vulnerabilities in oil and gas and coal leasing," while also working to highlight what he called more "scandalous" aspects such as low per-acre prices for oil and gas leases.

"To say that [Trump’s] against what we believe in, that’s an understatement. He wants to maul it. He wants to viciously destroy it," said Nichols.

That includes "considerably" ramping up litigation over new production on public lands.

"We went to the courts under Obama. We don’t care who’s in office; we will hold them accountable," Nichols said. "The courts right now are really the only check we have on this administration’s desire to cater to the fossil fuel industry."

But the movement — which will keep its moniker and the social media hashtag #keepitintheground — will also turn to new alliances, including conservation, recreation and sportsmen’s groups that could lead the charge against expanding production on public lands.

In addition to typical concerns like clean air or clean water, the focus could shift to efforts to lease or outright transfer lands to states.

"Every acre that is leased to the oil and gas industry or the coal industry is an acre that we as Americans lose," Nichols said.

350.org’s Shor likewise said she expects conservationists interested in fishing and hunting to take on a "leadership role" in the campaign’s future.

"We’ll see a broader coalition than we’ve ever seen before," she asserted.