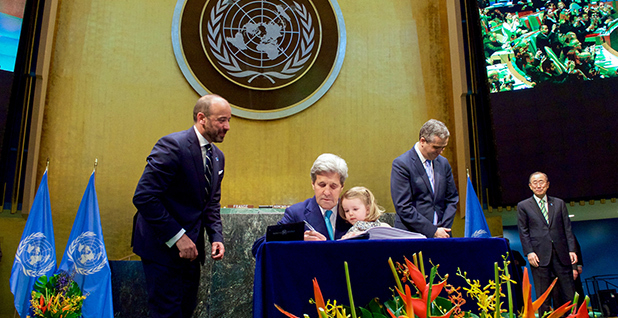 U.S. Secretary of State John Kerry, with his two-year-old granddaughter, Isabelle Dobbs-Higginson, on his lap and U.N. Secretary-General Ban ki-Moon looking on, signs the COP21 Climate Change Agreement on behalf of the United States during a ceremony today at the U.N. General Assembly Hall in New York, N.Y. Photo by the U.S. Department of State, courtesy of Flickr.

UNITED NATIONS — Secretary of State John Kerry cast the signing today of the landmark Paris climate agreement as a spur toward victory in a decadeslong war on global warming.

"Knowing what we know, this is also a day to recommit ourselves to actually win this war," Kerry told the U.N. General Assembly. "While it isn’t done yet, today we are on the march."

Joining 170 world leaders in signing the climate deal, he called Paris a "turning point" after so many years of conferences, speeches and wrangling over how countries should divide responsibilities for reducing emissions of heat-trapping greenhouse gases. Kerry was part of the fight in the beginning, having attended the Earth Summit in Rio de Janeiro as a junior senator from Massachusetts in 1992.

But while he said today’s signing was worth celebrating, he added it’s important to stay vigilant. Follow the agreement, he said, especially tracking how the private sector would heed the call to move away from fossil fuels and toward renewable energy.

Last year saw renewable energy investment soar to an all-time high, he said. That’s a path, he added, that would help the world achieve the Paris targets of limiting postindustrial warming to "well below" 2 degrees Celsius, or an aspirational target of 1.5 C.

"None of what we have to achieve is beyond our capacity technologically," Kerry said. "The only question is whether it is beyond our collective resolve."

Kerry shared the stage with delegates representing the overwhelming majority of the world’s countries. They will sign the deal today.

Ten countries will formally join the pact today, and 45 others must do the same before it takes effect.

To loud applause, Chinese Vice Premier Zhang Gaoli said China, the world’s largest emitter, would take steps to ratify the deal before it hosts the Group of 20 finance ministers meeting in Hangzhou in September.

But while delegates here acknowledge climate science, Kerry appeared to be speaking to Americans who doubt that human activities are accelerating global warming. He said the Paris deal "marked the moment that we put to rest the debate over whether climate change is really happening."

He then called on voters to elect leaders who reflect their climate views.

"It will facilitate more rapid resolution of key negotiating issues and encourage swifter implementation of domestic policies to cut pollution," he said.

The administration is conducting a process within the State Department to join the deal, which will be treated as an executive agreement that does not require Senate action.

On a call with reporters Wednesday, a senior State Department official said the process would conclude and the United States would join "as soon as possible this year."

Once the deal takes force, countries cannot withdraw for four years, meaning a Republican president couldn’t undo Kerry’s signing of the agreement until near the end of his first term in office.

But the official said a future president might not opt to abandon Paris anyway.

"The fact is in our minds that transition is really underway — countries are taking action, companies are taking action, technologies are moving forward," the official said. "I don’t think it’s very likely that anyone is going to withdraw from this exercise, although there are provisions in the agreement that would allow for that."