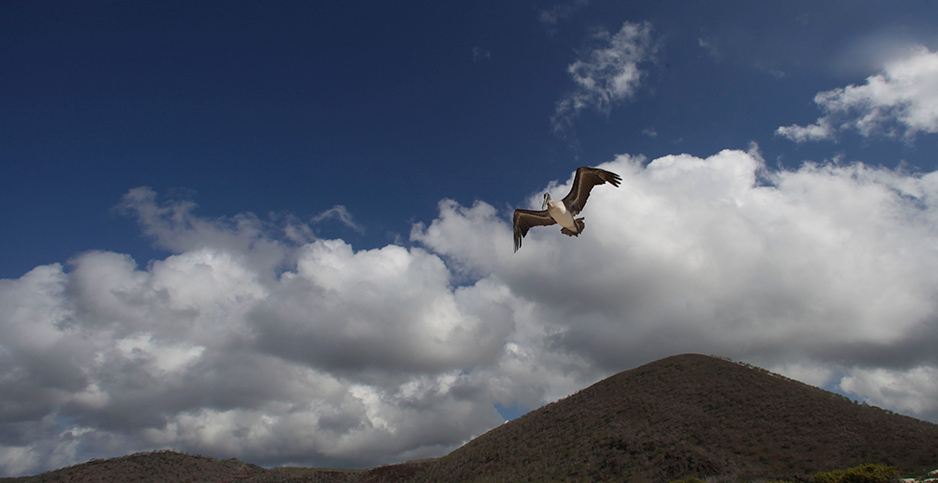 Rep. Lamar Smith (R-Texas) led a delegation to the Gallápagos Islands, where the group was told by researchers about climate change. Dolores Ochoa/Associated Press

Rep. Lamar Smith, the Texas Republican who chairs the House Science, Space and Technology Committee, led a bipartisan delegation to the Galápagos Islands earlier this month, where they were told that climate change is transforming the Ecuadorean nature preserve.

The trip also included stops in Chile, Colombia and other parts of Ecuador to tour U.S. research programs. It was funded by the State Department, and members were allowed to bring their spouse or adult children if they paid their own way.

"The purpose of the trip was for our delegation to meet with U.S. counterparts in these nations to discuss bilateral cooperation on scientific research, view U.S.-funded research and telescope facilities, and continue to build on our bilateral relationships with these countries to ensure continued access for U.S. researchers in these areas," said Thea McDonald, a committee spokeswoman, in a statement.

It’s the second time in as many years that Smith, one of the strongest critics of mainstream climate science in Congress, has visited one of the world’s hot spots for global warming. In May 2017, Smith and a bipartisan delegation of lawmakers traveled to the Arctic to tour U.S. research facilities. They stopped in Utqiagvik, a village in Alaska on the Arctic Ocean that has been altered by climate change. It faces increased risk from storm surges worsened by rising seas and warmer temperatures that are thawing the permafrost.

"Climate change was not a major topic of discussion during the CODEL," she said, referring to a congressional delegation.

But a researcher told the lawmakers that climate change plays a role in all the scientific studies being conducted on the islands, according to a source who traveled with the delegation. The Galápagos, the location of Charles Darwin’s research that led to his theory of evolution, has already been altered by rising temperatures.

Climate change is harming some of the animals that live in and around the Galápagos, research shows. Rising sea levels could destroy habitat of the marine iguana and sea turtles, according to the Galápagos Conservancy. Warmer ocean temperatures threaten corals and fish species that live in them. Larger animals, such as the fur seal, could face increased pressure to find food.

Taken together, those factors could cut into key sectors of the local economy, including tourism, fisheries and agriculture, according to the conservancy.

Smith reached out to colleagues about the trip as early as December, according to an emailed invitation that said the delegation would oversee programs run by National Science Foundation.

"The CODEL will be conducting oversight of NSF funded research and observatories," a Smith staffer said in the invitation. "MilAir will be requested," the staffer said, referring to military aircraft. "Spouses (or adult children) are invited to join at no taxpayer expense."

"This was a great CODEL during which we spoke with officials in Chile, Ecuador and Colombia about our partnerships on scientific research — the key topic on the trip, and a key area of cooperation between the U.S. and each of the countries we visited," Cuellar said in an emailed statement.

"We also visited several sites that the U.S. has helped fund, including ALMA in Chile and the Galápagos Islands," he said. "Climate change was not a key topic."

At one point, the waitlist for the trip was 50 members long, according to a House staffer.

A previous itinerary indicates that Smith had planned to include a stop in Brazil for meetings in Rio de Janeiro.

The group stopped at the Valley of the Moon in Chile, which is one of the driest place on Earth and is where a Mars rover prototype was tested. They also visited the Atacama Large Millimeter/submillimeter Array (ALMA), which is partially funded by the National Science Foundation.

In Ecuador, they had breakfast with the country’s ministers of trade; higher education, science and technology; aquaculture and fisheries; and industries and productivity. The third leg of the trip was in Colombia. The group learned about narcotics trafficking as well as the environmental destruction caused by the drug trade.

The trip provided a rare glimpse into bipartisan cooperation, according to the source.

"Members need to do more of them," the source said. "I saw really liberal Democrats having conversation with really conservative Republicans about really serious issues. That doesn’t happen here anymore."