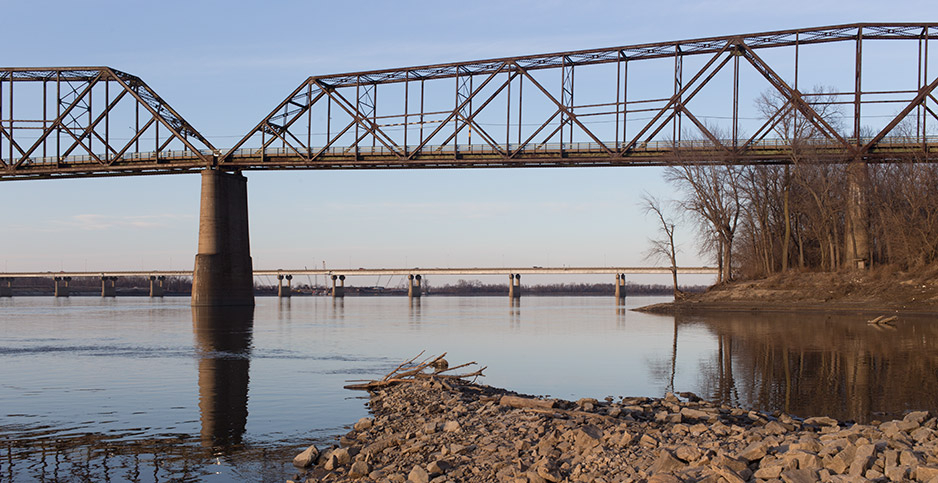 A developer has proposed to build a riverside complex containing theaters, retail and a lighthouse in northern St. Louis. The site is near these bridges that span the Mississippi River. Paul Sableman/Flickr

An old golf course along the Mississippi River was piled high with construction debris after the Great Flood of 1993 covered it in muddy water. Now two developers want to resurrect the site by building a retail and entertainment complex, despite concerns that it could flood again.

The project would be the largest riverside attraction to be built in the last 40 years in St. Louis. It’s a $400 million proposal called Lighthouse Landing, replete with a marina, hotel, retail boardwalk, indoor waterpark and lighthouse.

The first is a former St. Louis police officer, the second a onetime banker and trustee of Southern Illinois University. Both were convicted of financial crimes, and both have served prison sentences.

As part of their reentry to private life, the men, who had no prior relationship to each other and whose crimes were unrelated, forged a business partnership to receive "clean fill" from public construction and demolition sites across the city.

Nine years later, the landfill is full and graded flat, and Pier St. Louis has earned about $500,000 in waste disposal fees.

And the vision of building a riverbank destination is getting closer to reality.

"We’re going to have the thing master-planned," Repking said in a telephone interview this week from his home in Illinois. "There is no other place in St. Louis like this. We’ve got some really interesting people coming in there."

But major developments in floodplains don’t happen overnight or without public scrutiny and government engagement.

Environmental groups and public watchdogs, including the Pulitzer Prize-winning columnist Tony Messenger of the St. Louis Post-Dispatch, have been beating a drum against the development for years.

Devastating floods this spring, the second-largest in St. Louis’ history, brought the landfill and development proposal back into public view.

The site is one of the few high-and-dry riverfront parcels in north St. Louis, an area characterized by the Chain of Rocks water treatment plant, the Metropolitan St. Louis Sewer District’s Watkins Creek sewage pump station and other industrial sites.

"Right now, it’s probably 5 feet from the river being up on our property. That’s why I can sit here and tell you it will never flood," Repking said.

But critics say the developers are not accounting for the No. 1 risk faced by riverfront real estate up and down the Mississippi. It’s the unpredictability of the river itself, which has seen a string of major floods over the last decade.

Four of the 10 highest river crests at St. Louis have occurred since 2013, according to National Weather Service data going back to the 1840s. And this year’s flood season isn’t over.

Scientists say climate change in the Mississippi and Missouri river basins, which converge just north of St. Louis, is going to make extreme events more likely over the next 50 to 100 years.

Repking, who said he has "no idea" if climate change is real, dismissed such concerns. He said environmentalists "get way too far on the edge of things" with respect to climate change and that dire predictions of changing conditions are "ridiculous."

The story of how the Lighthouse Landing proposal came about is raising questions about St. Louis’ commitment to climate-smart policies involving its primary economic and cultural resource — the Mississippi River.

Three years after securing permits from the Army Corps of Engineers and the Missouri Department of Natural Resources to fill the former golf course, Daniele and Repking won a city contract to receive "clean fill" material.

Repking said nearly a decade of filling has made the site ready for development and that construction on utility lines and access roads should begin in about six months. Only one lot has been sold so far, for a convenience store.

The Army Corps’ St. Louis District offered a more nuanced description of the site. "There were some remnant water hazard features left on the property from the old golf course," and a "permit to fill in the remnant golf course features was issued. The property owners then applied for a permit from the City of St. Louis to begin placing fill to raise the area."

A spokeswoman for the Army Corps said the agency did permit the filling of "some remnant water hazard features left on the property from the old golf course," but the agency knows nothing about a future Lighthouse Landing. "To our knowledge, there are no current plans to further develop the area," she said an email.

A spokeswoman for the city of St. Louis had limited knowledge of the development plan. But a recent measure sponsored by Alderman Tom Oldenburg and backed by the city’s planning commission would enable the developers to reduce their tax burden by being designated a "special use district." The aldermen backed the measure by a 23-0 vote in April.

David Stokes, executive director of the Great Rivers Habitat Alliance, which opposes development in floodplains, said the Lighthouse Landing proposal is one of many efforts by private- and public-sector officials to build new homes and shopping centers too close to the Mississippi and Missouri rivers. Such projects are often made possible by filling low areas or raising levees that reconfigure floodplain designations and create a false sense of security, he said.

With respect to the Pier St. Louis landfill and prospective Lighthouse Landing, Stokes said, "They raised that whole area significantly so it’s out of the floodplain, and they can now do whatever they want with it.

"A decade ago, that area was 75 acres of floodplain where people played golf, and millions of cubic feet of water would be stored there in a flood, like it should be," he added. "Perhaps now that displaced water is going somewhere else harmlessly, or maybe it’s making someone else’s flood problem worse. It’s far too common a story here."

Repking disputed such assertions. He said a 5-foot levee already existed along the property when it was a golf course. His firm raised the dike 10 more feet and contoured the site to accommodate Lighthouse Landing. He said the golf course flooded only once, during 1993, and was abandoned after that event.

"The floodplain was never truly a floodplain because there was an existing levee," he said. "In ’93, the water went over the top of the levee. But it was high enough to where this current flood would not have topped the old levee."

The Army Corps’ spokeswoman in St. Louis said there is no officially designated levee along the property but that the operators of the golf course could have built a small "agricultural berm" to prevent high water from reaching the fairways.

Others say the notion that a berm would have held back the current Mississippi River flood is a stretch. "If that area flooded in 1993, it almost certainly would have flooded in 2019 if it had been left like it was," Stokes said.

Repking said engineers performed hydrologic studies before permitting the landfill to ensure the higher elevation did not result in a rise in the river. "There was very little water displacement associated with filling the site," he said. "What we’re doing does not prevent or cause more flooding."

There are no guarantees the Lighthouse Landing project will avoid future scrutiny, particularly as detailed plans are reviewed by state and local authorities. For now, the site remains a construction and demolition landfill under contract with the city.

Critics note that other riverfront development plans have come and gone, including for residential apartments, a casino and an entertainment barge. This one is just the latest in the series of risky business proposals, opponents say.

As the Post-Dispatch columnist Messenger wrote this week: "The lessons of the Flood of 2019 are the same as all of the floods that came before it. A patch of dry ground at the northern tip of St. Louis is a monument to how little we have learned."