Latinos, reeling from hurricanes, could be political force 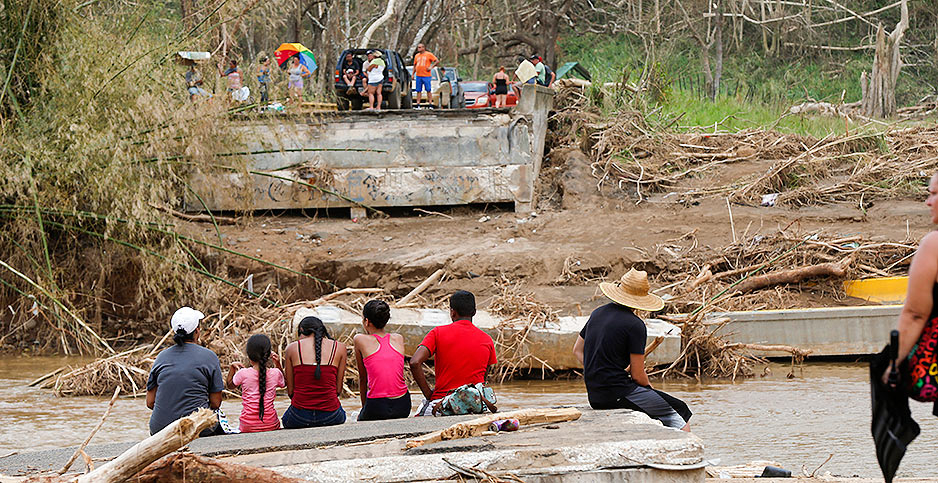 People sat on both sides of a destroyed bridge that crossed over the Rio San Lorenzo de Morovis in Morovis, Puerto Rico, on Wednesday. Gerald Herbert/Associated Press

Puerto Rico’s crisis marks the crescendo of a hurricane season that has disproportionately battered Latinos.

The territory’s disaster could pull Hispanics across the United States deeper into the politics of environmental justice, some pollsters suggest. Surveys indicate that it might already be happening. Even a small bump in Latino voting and activism could send ripples across the electoral landscape, though obstacles remain for those expecting a big shift.

Two new polls suggest Hispanics consider climate change more of a threat than the general public: a Washington Post-ABC News poll shows they overwhelmingly blame it for fueling stronger storms, and a Yale University study shows most Latinos feel personally affected by global warming, and they want stronger policies to address it.

Hurricane Maria might have sharpened concern about climate change, but Latino communities have historically felt strongly about the issue, public opinion experts said. That could be because they’re more likely to work outside or have family members in countries already grappling with the consequences of a warmer world. Polling backs that up. It suggests Hispanic voters care about environmental issues roughly as much as immigration.

The fast-growing demographic — clustered in swing states like Colorado and Nevada — is poised to expand as Puerto Ricans flee the decimated island and resettle on the mainland. Between 100,000 and 200,000 people are expected to migrate to states over the next two years, and many will choose Florida.

"You think that Republicans are worried about the influx [of Puerto Ricans] hurting them in a 1 percent state? You bet they are," said Susan MacManus, a professor of political science at the University of South Florida’s Department of Government and International Affairs. President Trump beat Hillary Clinton by a margin of 1.2 percent in Florida last year, meaning that about 113,000 people handed him the state’s 29 electoral votes.

But Latinos’ political muscle isn’t lifting as much as it might, on climate or other issues. Activists point to a range of policies they view as efforts to disenfranchise Hispanics — voter ID laws, restricted polling hours and, newly relevant, Puerto Rico’s second-class status in Congress and presidential elections.

The other big impediment is engagement. More than 70 percent of Latinos say they’ve never been contacted by an organization working to reduce global warming, according to last week’s report from the Yale Program on Climate Change Communication.

Turning out Latinos might be a better use of environmentalists’ time than wearing down reluctant conservatives, said Tony Leiserowitz, director of the Yale program.

"Here’s a group that’s already with you — in fact, they’re already ahead of you," he said. "They’re already more worried than people in many of the communities you’re already working in. And they want to get involved."

Green groups, long criticized for being too white, say they’re doing more to target people of color. They’re changing their hours so they can reach people after work or on the weekends. And they’re tweaking their messaging — bigger emphasis on jobs and health risks, less on ice caps.

"People are talking about how we need to save the planet … actually, we need to talk about how to save the people," said Michelle Romero, deputy director at the environmental justice organization Green For All.

Activists talking to Latinos might be able to point to big storms like Maria, but they shouldn’t rely on them to change people’s minds, said Jon Krosnick, a Stanford University professor who studies attitude formation and political psychology.

But unless they’re already deeply invested in the politics or science of the issue, people don’t usually jump to climate change as an issue after big storms, said Leiserowitz of Yale.

"People are not like Pavlov’s dog and they simply hear a bell and start salivating, or see a hurricane and go, oh, climate change," he said. Instead, people look at trends, with hurricanes acting as teachable moments.

And the trends in the flood-damaged and hurricane-stricken areas of Texas, Florida and Puerto Rico are adding up.

While Trump tweeted that Puerto Rican survivors of Maria "want everything to be done for them," Florida politicians are already positioning themselves to meet the post-Maria reality. Sen. Marco Rubio (R) has called for a large military deployment to Puerto Rico.

And Rep. Darren Soto, a Democrat whose Orlando-based district has a large Puerto Rican population, said the federal government has clearly failed to properly respond to the disaster.

"I think they completely underestimated the extent of the damage, and finally after many of us literally screaming at our desks for days and all these videos coming online, they started moving in the relief that was needed," Soto told E&E News.

Issues raised by the federal response to Maria could also shape the commonwealth’s future, Soto noted, including the longstanding debate over statehood.

"Certainly if they had a congressional delegation, I don’t think it would have taken seven to eight days for the president of the United States to recognize the devastation down there," he said.