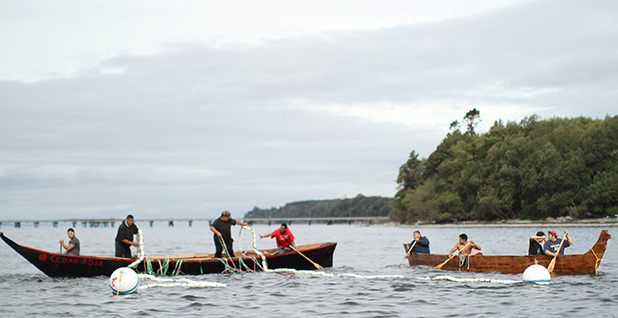 Republicans and other pro-coal lawmakers attacked the Army Corps of Engineers yesterday for deciding to kill a proposed export facility in Washington state that proponents hoped would ship the fuel from Western mines to Asian markets.

Sen. Steve Daines (R-Mont.) accused the administration of ignoring the needs of his state and its mines. And Rep. Ryan Zinke (R-Mont.) said he filed a Freedom of Information Act request for a trove of documents related to the Army Corps’ review of the so-called Gateway Pacific Terminal.

After months of deliberations, Col. John Buck, commander of the Army Corps’ Seattle District, sided with the Lummi Nation’s petition against GPT. The tribe said the project, proposed for a site just south of the U.S.-Canada border, would have violated treaty-protected fishing rights (E&ENews PM, May 9).

The Army Corps said its decision was consistent with the federal government’s responsibility to protect those rights. The project as proposed, Buck said, would have had more than a minimal impact and should be rejected as required by law.

Zinke said Buck destroying a "gateway" out of poverty for "blue-collar workers" prompted his FOIA request. Earlier this year, Zinke asked the Office of Inspector General to investigate Buck.

He also helped lead a legislative effort to force the Army Corps to finish the draft environmental impact statement before making a ruling on the Lummi petition (E&E Daily, Dec. 2, 2015).

"Col. Buck continues to set a dangerous standard that has absolutely no legal merits and will have far-reaching implications across the nation," said Zinke. "As a former commander myself, I know firsthand the challenges of balancing competing interests and making difficult decisions. This is why having information and data to back up any significant decision is vital."

Darrin Old Coyote, chairman of Montana’s Crow Tribe, criticized the Army Corps for disregarding their own sovereignty. The Crow Tribe has been looking for international markets for their coal and holds a 5 percent option in the Gateway terminal.

SSA Marine, which controls 51 percent of the terminal, said all options were on the table to rescue the proposal for North America’s largest export terminal. It would export 48 million tons of coal every year.

In recent years, coal export proposals dotted the Pacific Northwest. But the mining industry’s hope for selling cheap coal from the Powder River Basin has run into a collapse in international prices. To blame are the natural gas boom, an economic slowdown in China and fears of climate regulations (Greenwire, April 26).

With the Army Corps’ rejection of Gateway Pacific, the Millennium Bulk Terminals near the mouth of the Columbia River is the only coal export proposal in the Pacific Northwest that has yet to be rejected by regulators (E&ENews PM, April 29).

Even though exports proponents have cited continued foreign interest and hope for price stabilization, critics argue that the carousel of investors involved is an indication of coal exports’ precarious future.

"From this decision to China’s groundbreaking cap-and-trade program and recent commitments from world leaders at the U.N. climate negotiations in Paris, the writing on the wall is clear: Coal exports are the wrong direction," said Cesia Kearns, an activist with the Sierra Club’s Beyond Coal campaign.

Environmentalists hailed the decision of Arch Coal Inc., a key player in the Millennium terminals, to withdraw plans for a strip mine in Montana and federal regulators for then scrapping permitting for a supporting railroad (E&ENews PM, March 10).

Cloud Peak Energy Inc., a Powder River Basin coal company that controls the other 49 percent of Gateway shares, remains committed to the long-term viability of exports.

Cloud Peak CEO Colin Marshall panned the Army Corps for siding with the Lummi and environmentalists over many local officials, businesses and unions.

"GPT has been subjected to an unprecedented parallel process imposed by the corps that served to pick winners and losers among Native American tribes with differing interests in the project," he said. "We are working closely with our partners, SSA Marine and the Crow Tribe, as well as other stakeholders to review our options in light of the corps’ decision."

Kathryn Stenger, spokeswoman for pro-terminal group Alliance for Northwest Jobs and Exports, said: "To deny this permit without any involvement from the community or without releasing any of the findings from its yearslong review is deeply troubling and sends a dangerous signal that the Army Corps values special interests over the rule of law."

The Lummi and environmental groups acknowledged the decision was a first but welcomed a "historic" precedent after decades of the federal government failing to live up to its obligations to Native Americans.

"The United States must take its treaties with Indian nations seriously, and today the Army Corps honored its obligations to the Lummi Nation," said Northern Plains Resource Council member Alaina Buffalo Spirit, also a member of Montana’s Northern Cheyenne Tribe. "I’m glad I got to witness in my lifetime the day that the U.S. government honored Indian treaty rights over coal company profits."

Beth Doglio, co-director of the Power Past Coal coalition with Kearns, said environmental and local opposition that "stopped coal companies dead in their tracks" will only get stronger.

"We’ve defeated five of six proposals to protect the health and welfare of our families — and families around the world," she said. "Now, only the proposed Millennium Bulk Terminals in Longview remains, along with a terminal expansion in British Columbia that would affect rail-line communities in the Northwest.

"We will continue standing together to defeat these remaining projects and move forward with a cleaner, safer and more sustainable way of life."

Pro-export lawmakers will likely also intensify their fight. Rep. Rob Bishop (R-Utah), chairman of the House Natural Resources Committee, which has jurisdiction over Western mining issues, added his voice against the Army Corps.

"Americans deserve a fair and transparent legal system," he said, "not a government that uses everything in their arsenal to suffocate the American coal industry."