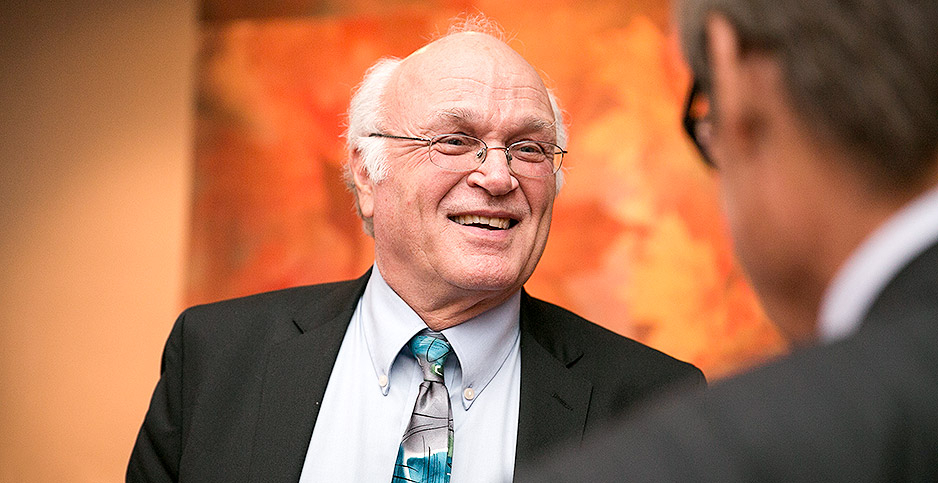 A regular day at the office for Gene Karpinski — one of the most politically savvy greens in Washington, D.C. — includes flagging down lawmakers in the basement of the Capitol.

That’s where the silver-haired president of the League of Conservation Voters gets the best face time.

"I have to be careful that I’m playing by the security rules in the Senate — they can be pretty strict," Karpinski, 66, joked in a recent interview. "It’s one of the most effective ways to have a candid, direct conversation with the senators themselves."

With midterm elections only five months away and a host of critical environmental protections on the line, Karpinski has never been busier — and never had more at stake.

The Connecticut native is regularly approaching lawmakers about issues of the day, such as protecting the Arctic National Wildlife Refuge from drilling and preventing the House GOP’s farm bill from gutting a conservation program. Ultimately, he hopes to help unleash a blue wave that will return both the House and Senate to Democratic hands.

To folks inside the Beltway, Karpinski is an institution. A graduate of Brown University and Georgetown University Law Center, he’s been devoted to public interest work for more than 40 years, including as field director of Public Citizen’s Congress Watch and executive director of the U.S. Public Interest Research Group.

The fast-talking father of two assumed the helm of LCV in 2006 after serving for more than a decade on the group’s board of directors and political committee. Under his leadership, the group has gained prominence for scoring members of Congress on their environmental records. Some Republicans have earned lifetime scores of zero for blocking legislation to address climate change.

Karpinski recently sat down with E&E News to talk about flipping the House, teaching his kids the political ropes and pitching issues like climate change to conservatives.

Senate Majority Leader Mitch McConnell (R-Ky.) said last week that control of the Senate is "absolutely" in play in the midterm elections. What do you think?

That’s absolutely true. I think Mitch McConnell has good reason to be worried.

What is LCV’s strategy for the Senate?

In the Senate, there has been an incredibly successful and powerful green firewall that has blocked all the horrible anti-environmental bills that have passed the House. It’s blocked almost all of them from becoming law, with the exception of drilling in the Arctic National Wildlife Refuge, which was attached to the tax bill. So we need to both maintain that firewall and actually make it bigger and stronger.

What are five races to watch in the Senate?

Another priority is, of course, trying to expand the firewall. Another person we’ll be active for is Jackie Rosen, who is challenging Dean Heller in the Nevada Senate race. It’s a sharp contrast between someone who’s a clean energy champion and someone who’s got a horrible lifetime score. And then the last one I’d point out for the moment is in Arizona. It’s an open seat, since Jeff Flake is retiring. There’s a multicandidate primary on the Republican side, and they’re all frankly horrible on the environment. So we’ll be supporting Kyrsten Sinema, who’s got a solid voting record.

Is it a given that Democrats will retake control of the House?

No. Look, I think it’s a toss-up. Anyone who thinks they can predict what’s going to happen five months from now is making it up.

What would happen with the bipartisan Climate Solutions Caucus in a Democratic-led House?

Look, hats off to the original organizers of this caucus. It was good to identify folks who actually said that climate change is not a hoax and it’s in fact a real problem that needs serious solutions. I think what we’ve found, though, is that a number of members of the caucus are actually retiring. So I think it remains to be seen. And frankly, I’d say we’re a little more skeptical about some of the newer members that have signed up for the caucus. If you look at their LCV scores, they’re between zero and 10 percent. So they may sign up for the caucus and claim to care about the environment, but their voting records speak very differently.

Will LCV campaign against members of the Climate Solutions Caucus?

It’ll be a case-by-case basis. Being a member of the caucus is not a free pass to say we won’t be trying to defeat you. It’s something to look at. But most important for us is the overall voting record.

You’ve been advocating for the environment for more than 40 years. What is one of your favorite memories?

There are any number of fantastic memories. I recall very fondly that back in June 2009, by a vote of 219-212, the House passed the comprehensive climate and energy bill. And we had bipartisan support. Eight Republicans voted for that. Hats off to congressmen Henry Waxman and Ed Markey [who led the landmark legislation]. We had held daily conversations with them and their staff. As the vote was being called, we were not certain we were going to win. But we were out there on the sidewalk, working those last few votes as they were walking in on that hot Friday afternoon. A big cheer went up as we got over the top.

How do you pitch climate issues to conservative lawmakers?

Where are you from?

I grew up in Connecticut, and my 90-something-year-old parents still live in the house I grew up in. It’s great. Knock on wood they’ll stay healthy.

Where do you live now?

I’ve lived in Arlington, Va., for over 30 years, and that’s where my 20-something-year-old kids were born and raised.

My wife works for WETA, public TV here in the D.C. area. My daughter is graduating from college this weekend. And my son’s about to go to Columbia Journalism School — crazy profession these days.

When your kids were growing up, did you talk to them about climate change?

Oh, sure. I mean, we had them knocking on doors in presidential campaigns. Like in 2008, when candidate Barack Obama was first running. So they started getting into politics at an early age. And my wife worked on environmental issues before she worked in public TV. So both of us kind of grew up and raised our kids with respect for these issues. But they also got taught in school more than I certainly was.

What do you do in your spare time?

I’m proud to say I regularly play in a Saturday morning basketball game as a weekend warrior with people I went to law school with 40 years ago. We still get up and down a full court. That’s something I look forward to with my friends every week.