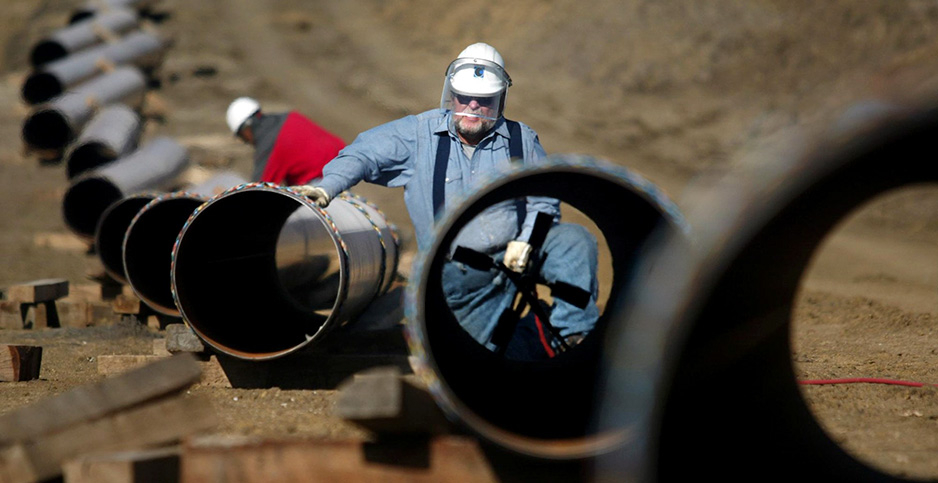 Welders work on a natural gas pipeline near Mustang, Texas. The gas industry is pursuing a secretive fight against U.S. efforts to electrify the building sector. Tom Fox/KRT/Newscom

In public, Eversource Energy likes to tout its carbon neutrality goals and its investments in offshore wind.

But officials from New England’s largest utility struck a different tone during an industry presentation in mid-March. Instead of advocating for lower emissions, company officials outlined a defensive strategy for preserving the use of natural gas for years to come.

Natural gas is "in for [the] fight of it’s life," said one slide presented at the meeting and obtained by E&E News. It also called for a lobbying campaign, saying that "everyone needs to contact legislators in favor of NG." Another slide asked how the industry could "take advantage of power outage fear" to bolster gas’s fortunes.

Eversource is identified in the presentation materials as the co-leader of a national "Consortium to Combat Electrification," run out of the Energy Solutions Center, a trade group based in Washington. The slides identified 14 other utilities involved in the effort and said the group’s mission was to "create effective, customizable marketing materials to fight the electrification/anti-natural gas movement."

The presentation comes amid a rising tide of policies aimed at banning natural gas in buildings.

Eversource executives sought to distance themselves from the messages conveyed in the presentation, saying they don’t reflect the views of the utility’s leadership. Yet the company’s private assessment, delivered to industry insiders, underscores the challenge facing gas providers as state and federal policymakers set their sights on net-zero emissions targets.

More than 40 cities in California have taken steps to restrict gas use in new buildings. Seattle followed suit in February. That has prompted a growing number of Republican-led states to preemptively block municipal gas bans (Energywire, Feb. 2).

Massachusetts looks like the next battleground. The state recently enacted a climate law to eliminate greenhouse gases by 2050. That will require zeroing out emissions associated with heating and cooling buildings, which accounted for roughly 27% of the state’s greenhouse gases in 2017, according to the most recent Massachusetts data.

When Massachusetts regulators mapped out a path to zero emissions late last year, they concluded that swapping out oil- and gas-fueled furnaces, boilers and water heaters for electric alternatives constituted the most cost-effective strategy.

That represents a potential threat to companies like Eversource, which last year paid $1.1 billion to acquire the Massachusetts-based assets of Columbia Gas, a subsidiary of NiSource Inc.

"None of these companies want to write their own obituary," said Deborah Gordon, a former petroleum engineer who now serves as a senior principal at RMI, a think tank that favors electrification. "If you’re going to bend this curve, and we bend it quickly, there are going to be casualties. Some will transform, some will consolidate, some will go away."

It’s unclear which of those outcomes is destined for Eversource. The company is an offspring of New England’s deregulated energy markets. It does not own power plants but instead buys electricity on the wholesale market and sells it through its transmission and distribution system in Massachusetts, Connecticut and New Hampshire. In 2020, its electricity segment earned more than $1 billion, amounting to more than 85% of the company’s business.

Eversource has invested in three offshore wind projects in response to New England’s efforts to expand the clean energy sector. Electrification is a growth opportunity for the utility. But the revelation that Eversource and other utilities are girding for a political battle over gas’s future shows how power companies remain wedded to fossil fuels even as they take steps to green their businesses.

When Jim Judge, the utility’s CEO, was asked by a financial analyst in February if the Massachusetts climate bill threatens the company’s natural gas business, he said that Eversource could find business opportunities in an electrified transportation sector. Roughly half the state’s homes also heat with fuel oil, offering another avenue for growth, he said.

"I think we’ll work with the state, as we will the other states, to make sure that we can aggressively decarbonize the supplies, but we’re comfortable with where that legislation is," Judge said at the time.

Yet natural gas distribution is a growing part of Eversource’s portfolio. The company picked up the Massachusetts assets of Columbia Gas after a series of explosions along the utility’s distribution lines rocked the Merrimack Valley in 2018. The deal added 330,000 gas customers, effectively doubling Eversource’s gas business.

It stands to be a lucrative decision. As a regulated monopoly, Eversource is entitled to earn a rate of return on its investments. The company’s three-year capital spending plan calls for pouring $3.6 billion into its gas business, a $1.6 billion increase over the utility’s plans from a year ago. The pool of investments on which the utility is entitled to earn a return grew by 5% as a result of the transaction, company executives said in their February presentation to investors.

Still, Eversource officials are walking a tightrope on gas. They tout their efforts to reduce emissions while also arguing that more investments are needed to ensure the safety of the gas system.

When The Boston Globe first reported the company’s involvement in the secretive consortium last month, Eversource officials said that they had withdrawn from the group. The utility later ran a full-page ad in the paper showing an offshore wind turbine and touting Eversource’s pledge to become carbon neutral by 2030.

A spokeswoman for the utility reiterated that message in a statement to E&E News, saying the presentation given by employees of the company’s gas division in March was not reflective of Eversource’s position.

"The company does not and will not support any efforts that conflict with the company moving our gas business toward a cleaner energy future for our customers," Caroline Pretyman wrote in an email. "The affiliation to this effort was not supported by Eversource Gas leadership, who have been fully engaged with policy makers, other gas utilities and policy makers to study how best to transition toward a lower-carbon gas future that will continue to ensure reliable, affordable energy for its customers."

But the call to arms by Eversource, whether authorized or not, reflects a wider movement within the gas industry.

As efforts to restrict new natural gas hookups have expanded across the country, so too have the industry’s efforts to fight back. In August 2020, the Energy Solutions Center established an electrification consortium with 15 utilities to study the impacts of electrification on natural gas use, said David Weiss, who leads the center.

"The powerpoint slides you referred to by Eversource mischaracterized our electrification consortium," he wrote in an email, bolding the sentence for emphasis.

The ESC, as it is known, is a nonprofit focused on the deployment of gas technologies. It is housed in the office of the American Gas Association, the industry’s top trade group, but is an independent organization. In its 2018 tax filing, the Energy Solutions Center listed 49 members, mostly drawing from the ranks of gas utilities, and reported annual revenues of $1.4 million.

Eric de Lacoste, an Eversource manager for gas marketing, is listed as the company’s representative on the ESC board. De Lacoste was one of several Eversource officials who gave presentations at the March industry gathering in Boston.

The consortium will identify electrification studies and produce charts, graphs and fact sheets on the impact of moving away from natural gas, Weiss said. How member utilities use that information is up to them, he said.

"We are not a policy or advocacy group so we do not have an ‘anti-electrification campaign’ underway," Weiss said.

E&E News contacted every company listed in the slide. Atmos, DTE, Enbridge, FortisBC, MDU, the Municipal Gas Authority of Georgia, National Fuel, SoCalGas, UGI and Washington Gas confirmed their participation in the group but said it was inaccurate to describe it as an anti-electrification group. Exelon subsidiaries Baltimore Gas and Electric, PECO, and Delmarva Power also participated in the group.

"As a company with both gas and electric utilities, we only support the organization’s effort to help educate the public on natural gas as an affordable, safe and reliable source of energy," wrote DTE spokesman Peter Ternes. "We do not participate in consortium activities that oppose electrification."

"It is the belief of the ESC and the consortium that natural gas and its reliable, resilient utility delivery infrastructure should be included as part of a balanced energy solution to reduce carbon emissions," said Karen Merkel, a National Fuel spokeswoman.

Efforts to reduce gas leaks in the near term, combined with development of renewable natural gas and hydrogen in the long term, would maintain reliable and affordable energy supplies while meeting environmental goals, they said.

The industry’s position was bolstered by a recent study by researchers at Columbia University’s Center for Global Energy Policy. It found that continued investment in natural gas infrastructure could complement electrification efforts by providing ways to deliver clean fuels and ensure the reliability of the energy system.

The advantages of the gas system are threefold, said Erin Blanton, a senior Columbia researcher who authored the report. The infrastructure already exists and could be used to deliver clean fuels like renewable natural gas or hydrogen. A molecule like hydrogen can easily be stored and delivered at times of peak demand. And the use of natural gas infrastructure could help reduce stress on the electric system, which will have to grow dramatically to meet rising demand from transportation and other sectors.

"We wanted to reframe it as infrastructure that has had a lot of money invested in it and is very reliable. Let’s not walk away from it. Let’s think about how to incentivize increasingly green molecules and then think about how to make it less leaky," Blanton said. "We don’t think it’s achievable to get to net zero without delivery of molecules in that system."

Other experts are skeptical. The existing natural gas system is already riddled with leaks and runs through major population centers, said Gordon, the RMI expert. That infrastructure would likely need to be replaced to carry a lighter and more volatile molecule like hydrogen, which presents serious safety concerns.

Nathan Phillips, a Boston University earth and environment professor, said fuels like hydrogen could be a powerful tool for helping reduce emissions in the industrial and power sectors. But he argued that delivering hydrogen to heat homes and businesses represented little more than a gas industry talking point.

"They are staring into a real conundrum because even if they fix the leaks that are plaguing the system, it is still fossil fuel and it’s still combustion, and we won’t meet our aggressive climate pledges," Phillips said. "They are hellbent on a future on pipes where they deliver gas under our streets and sidewalks into our homes."

In Massachusetts, the fight over gas’s future is only beginning. The issue emerged in 2019, when the Boston suburb of Brookline attempted to ban gas hookups in new buildings (Climatewire, Nov. 25, 2019). Attorney General Maura Healey (D) overruled the ban, saying the town lacked the authority to implement it.

The climate bill that was enacted in March revived the debate. Democratic lawmakers scuffled with Gov. Charlie Baker, a Republican, over a net-zero building standard. Baker maintains that the law does not ban gas, but administration officials have said the state won’t be able to meet its net-zero requirements without reducing emissions from heating and cooling systems in buildings (Climatewire, April 2).

The Department of Public Utilities, which regulates utilities, has opened a proceeding into the future of gas. State environmental regulators, meanwhile, are planning to set a cap on heating emissions.

Cathy Kristofferson, an anti-pipeline activist in Massachusetts, said companies like Eversource are kidding themselves if they think they can expand their gas business while simultaneously meeting their climate goals.

"Your product isn’t a bridge fuel. It isn’t going to bring us to something better," she said. "We need to get off it."