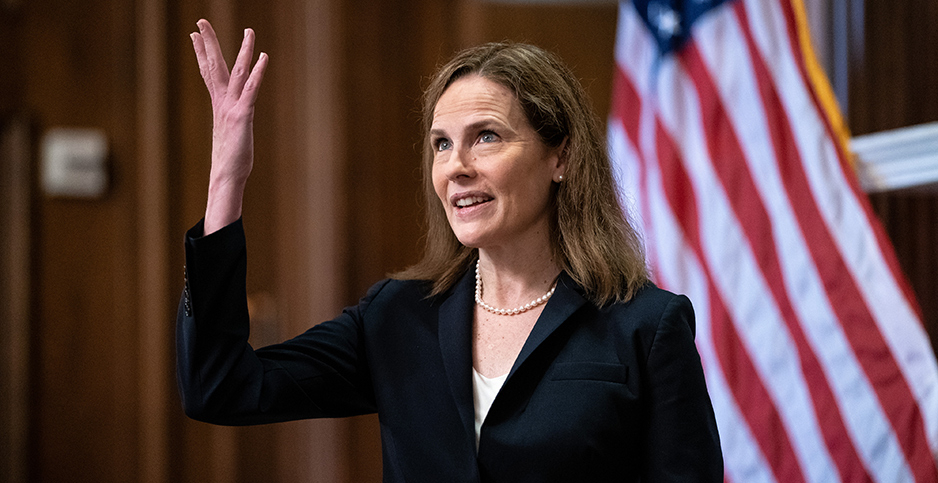 Democrats have already tried — and failed — to delay a vote on Barrett until after the election but will continue their efforts to disrupt the process.

This week, the Senate minority has made at least three motions to adjourn until after the elections, unless negotiators reach a deal on pandemic relief.

Today’s Judiciary session is scheduled to begin at 9 a.m. The vote was set to begin at 1 p.m. but may now happen earlier.

Senate Minority Leader Chuck Schumer (D-N.Y.) said Democrats would "not provide the quorum that is required," saying Barrett’s views are "way way to the right."

Senate Judiciary Chairman Lindsey Graham (R-S.C.) has said he will hold a vote whether Democrats show up or not. "Judge Barrett deserves a vote and she will receive a vote," he said.

Senate Democrats and their allies mobilized yesterday to generate opposition to Barrett. Among the issues they raised was the nominee dodging questions about climate.

Barrett critics worry she would rule against efforts by the federal government to rein in greenhouse gas emissions.

"While public policies to climate change may be controversial, the scientific facts surrounding climate change are not," Georgetown University law professor Lisa Heinzerling said during a call with reporters yesterday.

"Judge Barrett’s inability to distinguish science from politics when it comes to climate change is disturbing," Heinzerling continued.

Barrett, who currently sits on the 7th U.S. Circuit Court of Appeals, told the Judiciary Committee last week that she holds no "firm views" on climate change and said the issue is a "very contentious matter of public debate."

She echoed those statements in her responses to Senate lawmakers’ questions for the record.

"The Supreme Court has described ‘climate change’ as a ‘controversial subject[]’ and ‘sensitive political topic[],’" Barrett wrote in response to California Sen. Dianne Feinstein, the top Democrat on the Judiciary Committee.

"It would be inappropriate for me, as a sitting judge and as a judicial nominee, to opine further on any subject of political controversy."

In the same document, Barrett explained to Rhode Island Sen. Sheldon Whitehouse (D) that during her time on the 7th Circuit, she recused herself out of "an abundance of caution" in cases involving a set of entities of Shell Oil Co., where her father worked for many years.

She did not say why her recusal list excluded other subsidiaries of Royal Dutch Shell PLC or the American Petroleum Institute, where her father has also held leadership positions.

Whitehouse asked, "Are there any other oil and energy companies that, if a case involving them were to reach the Supreme Court, you would need to recuse yourself from?"

Barrett offered an answer similar to the one she gave during her hearings when lawmakers asked whether, if confirmed, she would remove herself from a Supreme Court showdown over the results of the presidential election.

President Trump has said he wants nine justices on the bench in case the court needs to decide the matter, and he has refused to commit to a peaceful transfer of power.

"The question of recusal is a threshold question of law that must be addressed in the context of the facts of each case," Barrett said to Whitehouse, noting that recusal decisions hinge on review of the relevant statutes and precedents and consultation with colleagues.

Barrett declined to say whether she shared the view of her mentor, the late Justice Antonin Scalia, that the Clean Water Act’s scope should be limited to streams and wetlands with a direct surface connection with navigable waters.

She pointed to the 7th Circuit ruling she joined in 2018 that struck down an expansive reading of the statute but that relied on Justice Anthony Kennedy’s competing "significant nexus" test (Greenwire, Sept. 28).

During her hearings last week, two Republican lawmakers applauded the ruling as an indication that Barrett would favor a narrow definition of waters of the U.S., or WOTUS.

"As a sitting judge and as a judicial nominee, it would not be appropriate for me to offer an opinion on abstract legal issues like the proper scope of federal authority under the Commerce Clause and the Clean Water Act," Barrett wrote in response to Vermont Sen. Patrick Leahy (D). "Such questions can only be answered through the judicial process."

Barrett would not say whether she agreed with the Supreme Court majority’s writing in the 2007 case Massachusetts v. EPA that "respected scientists" believe that the increase of carbon dioxide in the atmosphere is connected to "a well-documented rise in global temperatures."

The 5-4 ruling established that EPA could regulate greenhouse gas emissions under the Clean Air Act. Scalia dissented in the case.

"Massachusetts v. EPA is a precedent of the Supreme Court entitled to respect under the doctrine of stare decisis," wrote Barrett, who has not eased Democrats’ concerns that she would overturn established case law. "It would not be appropriate for me to opine further on this question."

Heinzerling, who led the challengers’ briefs in Massachusetts v. EPA, said yesterday that "it is reasonable to predict" that Barrett could join the Supreme Court’s five other conservative members in limiting the power of federal agencies to address issues like climate change.

"And it is reasonable to predict that she would do so while embracing a narrow view of the liberties that our separation of powers protects," Heinzerling said. "That view looks only at the liberty of those affected by government regulation and not those who are hurt by government inaction or timidity."

Sen. Dick Durbin (D-Ill.), a member of the Senate Democratic leadership team, repeated his call for two more Republicans to join Sens. Lisa Murkowski of Alaska and Susan Collins of Maine in pushing back against GOP efforts to swiftly confirm a conservative replacement for the late Justice Ruth Bader Ginsburg.

He cited Republicans’ efforts to block President Obama’s pick to replace Scalia when he died nine months before the 2016 election. Ginsburg died on Sept. 18.

Senate Majority Leader Mitch McConnell (R-Ky.) plans to push Barrett’s nomination on the floor as soon as she leaves committee, with a possible weekend session and a final vote Monday.

Republican senators took to the floor yesterday to express support for Barrett and questioning opposition from Democrats.

Durbin said, "It takes two more Republicans to stop the Amy Coney Barrett nomination from moving forward in this breakneck pace violating the standards that Republicans swore to uphold four years ago. It takes two of them. We can count. We have two. We need four for that to happen."

In addition to Barrett, the Judiciary Committee will consider five other nominees:

The president yesterday announced his intention to nominate Indiana federal prosecutor Thomas Kirsch to replace Barrett on the 7th Circuit.