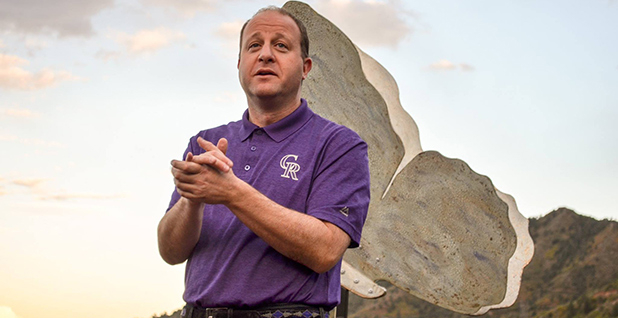 Rep. Jared Polis (D) has tempered his liberal positions on energy as he runs for Colorado governor. Jared Polis/Facebook

One of the biggest questions hanging over Colorado’s race for governor is whether the state’s powerful oil and gas industry will try to stop the election of Democrat Jared Polis.

There are plenty of reasons for the industry to be concerned.

Polis, a multimillionaire congressman from Boulder, led efforts in 2014 to limit hydraulic fracturing in the state — a campaign he halted at the last minute after Democratic Gov. John Hickenlooper negotiated a truce between environmentalists and the energy sector.

Undeterred, Polis this year is running against Republican Walker Stapleton on a platform that doubles down on his environmental ambitions by calling for the state to use 100 percent renewable energy by 2040.

"Join our efforts for energy independence," says Polis in a recent ad. In the background are two slowly spinning wind turbines.

Yet the potential threat to the industry’s bottom line hasn’t so far spurred a significant political response from a sector that, according to its own estimates, contributes more than $31 billion to Colorado’s economy and accounts for more than 232,000 jobs.

The absence hasn’t gone unnoticed, and Colorado pollster David Flaherty said the industry could be running out of time to make a difference.

"It’s not too late, but it better happen soon," said Flaherty, who formerly worked at the Republican National Committee.

One potential explanation, he said, is that the oil and gas industry won’t be able to overwhelm the race with political ads.

Polis, who made a fortune — along with his family — during the go-go days of the early internet, has a history of spending big to win elections, and this year is no exception.

In 2008, he dropped $6 million to secure a seat in Congress, and so far, he’s pumped at least $11.2 million of his own cash into his campaign for governor.

"The difference in this equation is that they would be going after a guy who can match them dollar to dollar, north of $20 million," Flaherty said. "He’s going to be able to counter whatever they put in."

There are other factors in play, too.

A major consideration is Colorado’s macro political environment. While the state is almost evenly divided among Democrats, Republicans and independents, it supported Hillary Clinton over Donald Trump in 2016 by 5 percentage points.

Democrats also saw more voters in their governor’s race primary: about 637,000 Democrats, compared to 503,000 Republicans, according to state figures.

Combine that with the potential for a nationwide Democratic wave, much of it fueled by anti-Trump sentiment, and there’s a sense among some Colorado politicos that the oil and gas industry is balking because the money it spends may not make a difference. Colorado GOP strategist Josh Penry rejects that theory.

"Because of the [political] environment, Polis is the slight favorite. But he is deeply flawed and hugely liberal and that [the race] is fait accompli is a Boulder pipe dream," said Penry, a former state lawmaker. "He’s going to have to run a race."

Penry, who has worked often with the state’s oil and gas industry, said he isn’t sure, however, how much the sector will help Stapleton’s campaign.

"The industry is not a monolith," he said. "Some will inevitably be all in for Walker. Some will sit it out, and some will be in between."

Dan Haley, president and CEO of the Colorado Oil & Gas Association, was similarly uncertain of what the industry plans to do — though he left open the possibility of doing business with a future Polis administration.

"Congressman Polis has said he wants to work with our industry, and if he’s elected, we obviously would be open to those conversations," Haley said. "That said, he has to appreciate his past actions has caused great concerns in our industry."

Already, at least one Polis supporter has tried to bridge the gap between his campaign and the oil and gas sector. Longtime Democratic strategist Mike Stratton said he has reached out to the industry with a very simple message: Choose wisely.

"I have and others have been looking to tell reasonable people who are willing to listen a couple things — one, Polis doesn’t have horns, and two, he’s going to win," Stratton said. "So they should find a way to stand on the sidelines or try and find an avenue to have a conversation with the guy."

Stapleton, for his part, has positioned himself as a defender of the energy sector. In one interview early in the campaign, he accused Polis of "literally running to kill the oil and gas industry in Colorado."

A section of his campaign website labeled "energy and land" promises that if he’s elected, "businesses can be certain that they will not be hit with agenda-driven, burdensome, job-killing regulations." It also talks about balancing support for the energy sector while protecting "Colorado’s environment for current and future generations."

In spite of the overtures, the oil and gas industry has not come up big for Stapleton — despite his political connections. (Stapleton is in his second term as state treasurer, and he’s a second cousin to Republican former Florida Gov. Jeb Bush and former President George W. Bush.)

A super political action committee-type group that supports Stapleton has received no more than $200,000 from the oil and gas industry, according to state records, and data from the National Institute on Money in State Politics show that his campaign has gotten roughly $32,000 this election cycle from that sector.

The perceived lack of support prompted Stapleton to plead for help during a debate a few weeks ago with his then-opponents in the Republican primary.

"I’ve taken a de minimis amount of money from people in the energy industry," he said. "But guess what? I hope they’re listening, because it’s going to need to be a lot more to defeat Jared Polis, who literally wants to end the future of the energy industry in Colorado."

Asked if the oil and gas industry would do more in the Colorado race, Kathleen Sgamma, president of the Western Energy Alliance, demurred and simply said, "Certainly we’re watching it closely."

A possible reason for the hesitance is that the oil and gas industry could face an opponent bigger than Polis come Election Day.

A group of environmentalists in the state is trying to put an initiative on the ballot that would expand setbacks from oil and gas wells to 2,500 feet on non-federal land — a distance that energy officials said would cripple their business.

"It’s a huge concern to our industry because it’s effectively a ban on oil and gas," said Haley of the Colorado Oil & Gas Association.

The anti-fracking group has until Aug. 6 to gather enough signatures, though there have been problems. Organizers said a signature-gathering company it hired took thousands of signatures out-of-state because of a contract dispute; they were later returned.

The setback effort, according to Colorado Politics, has the support of the Colorado Democratic Party’s central committee — but not Polis, despite his support in 2014 of a similar ballot initiative.

In a phone interview, Polis said the proposed setback initiative would be "economically damaging to our state" and that his preferred approach would include a carve-out for landowners who want oil and gas wells.

Anne Lee Foster, an organizer with Colorado Rising — the group behind the setback effort — said she is confident of the initiative’s chances, despite the recent obstacles.

"We are still on track to make the ballot," she said. "We’ve had a few setbacks — no pun intended — the past week, but we have over 550 trained volunteers statewide who are collecting signatures."

She added that the "endorsement from the [Democratic] party shows that this is something the people of Colorado really care about, especially progressive voters."

As for Polis, she said he seems "very focused on his gubernatorial election right now."