Line 3 is about to come online. What will Biden do? 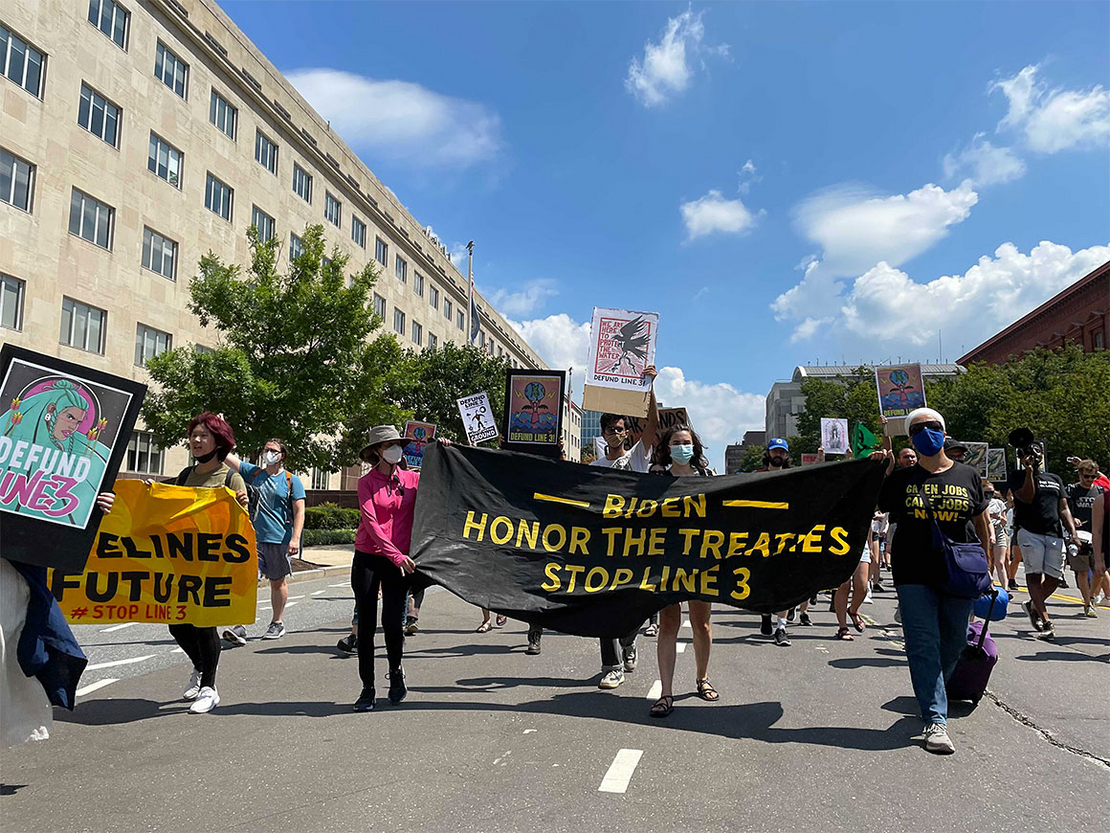 The embattled Line 3 project could be operational next month, putting pressure on the Biden administration to weigh in as protesters march on the nation’s capital and legal fights heat up.

Enbridge Inc. revealed in a filing this month to the Federal Energy Regulatory Commission and Canadian pipeline regulators that oil could begin flowing through the Line 3 project as soon as mid-September, marking a large step forward for an initiative that includes more than 300 miles of new pipeline through the Midwest. That new infrastructure will connect to the rest of Enbridge’s Line 3 system, which was built in the 1960s and extends from Edmonton, Alberta, to Superior, Wis.

Enbridge says it needs to replace a section that’s deteriorating and not running at full capacity. The replacement project within the United States involves replacing nearly 370 miles of pipe in parts of North Dakota, Minnesota and Wisconsin. Only the Minnesota portion is unfinished.

The “Line 3 replacement is an essential, safety-driven, maintenance project,” said Michael Barnes, an Enbridge spokesperson, in an email yesterday.

“It replaces the existing pipeline with a safer pipeline made of thicker steel and more advanced protective coatings, helping to protect the environment for generations to come,” Barnes continued, also describing Line 3 as the “most studied pipeline project in Minnesota history.”

The plans have sparked criticism from environmentalists and Democrats in Congress, creating a challenge for Biden as he aims to appeal to his base as well as moderate lawmakers backing the bipartisan infrastructure deal and labor unions.

Yesterday, protesters gathered in front of the Army Corps of Engineers’ headquarters in Washington, unfurling a black tube marked with the message “Biden: Stop the Black Snake” that was then carried through city streets. The group also demonstrated at the White House and the home of Ron Klain, the White House chief of staff.

The Army Corps declined to comment on the fate of Line 3, citing ongoing litigation.

On Capitol Hill, some Democrats like Sen. Jeff Merkley of Oregon are calling on the White House to direct the Army Corps to revoke a critical water permit for the project, which involves replacing sections of the existing Line 3 with larger diameter pipe in North Dakota, Minnesota and Wisconsin.

“We urge you to utilize the authority you have to immediately suspend the 404 permit for Line 3 in order to conduct a full federal [environmental impact statement] prior to any additional construction,” Merkley wrote in a letter last week to Jaime Pinkham, a top Biden political appointee overseeing the Army Corps and a member of the Nez Perce Tribe. Merkley is a member of the Senate Environment and Public Works Committee overseeing the Army Corps.

He led the letter with Reps. Pramila Jayapal (D-Wash.) and Ilhan Omar (D-Minn.). Project opponents have repeatedly made the same appeal, writing to Biden in May and again earlier this month.

The Biden administration is likely concerned about certain parts of its constituency, both in the Senate and in the public — namely labor groups — and doesn’t want to appear too opposed to infrastructure. Line 3 has the backing of various unions, including the Laborers’ International Union of North America and a local chapter of the International Union of Operating Engineers, said Alexandra Klass, a law professor at the University of Minnesota.

Klass highlighted that the Army Corps under Biden has allowed the Dakota Access pipeline to operate while a deeper environmental review is conducted, despite widespread opposition from tribal and environmental groups.

“They’re trying to make as many constituents happy as they can and sort of pushing forward on new clean energy but don’t seem to be willing to invalidate permits for fossil fuel projects already underway,” she said.

Other policy experts warn starting up Line 3 could mar President Biden’s climate record, particularly since it would carry oil sands crude, which can require more energy to extract than traditional forms of oil.

“I think we’re in a new moment in the climate crisis where decisions like this take on a bigger value in terms of the administration’s credibility,” said Paul Bledsoe, a former White House climate adviser in the Clinton administration. “Ahead of consideration of the infrastructure bill, reconciliation and COP 26, this doesn’t send a consistent message.”

The Army Corps as recently as June said in court that its permits were valid and sufficient environmental review was conducted, Klass noted.

Opposition has mainly centered on the Minnesota portion of the line — the only section yet to be completed — where critics argue the current project route deviates significantly from the existing Line 3 pipeline and reject the “replacement” title (Energywire, Mar. 9).

Overall, the project stems from a consent decree hammered out in 2017 between EPA, the Department of Justice and Enbridge to resolve claims tied to the company’s 2010 spills in Michigan and Illinois.

Under that agreement, Enbridge agreed to pay more than $100 million in upgrades — including the Line 3 replacement — to prevent spills and improve operations across nearly 2,000 miles of its Great Lakes pipeline system, as well as a civil penalty of more than $60 million for Clean Water Act violations.

Last fall, Minnesota regulators approved a 401 Water Quality Certification for Line 3, which was followed by the Army Corps issuing the project a subsequent permit to cover dredging and filling in federal waters to construct the oil line.

Those approvals have drawn sustained pushback from environmental and tribal challengers. Merkley and other lawmakers, for example, called on Pinkham and the Army Corps to “utilize the authority you have to immediately suspend the 404 permit for Line 3 in order to conduct a full federal EIS prior to any additional construction.”

In front of the Army Corps’ headquarters yesterday, protesters said they wanted to put pressure on the agency, Biden and senior administration officials.

“I think this is a real test for him to see if he can walk the walk,” said Rory Erlich, a student at Tufts University, referring to Biden’s record on climate change.

Erlich said while Biden’s decision to pull the cross-border permit for TC Energy’s Keystone XL pipeline was a good move, others — like the administration’s call on OPEC to increase oil production — are problematic. The Keystone XL pipeline has since been canceled by the company.

Still, some groups welcomed the pending completion of Line 3.

“Replacing Line 3 is an important milestone for Minnesota that demonstrates the ability to protect the environment, support the economy, and allow for a key piece of infrastructure to be restored,” said Susan Goudge, a community representative for Minnesotans for Line 3, a group that backs the pipeline and includes construction and piping organizations on its advisory council.

A wild card for Line 3 is litigation from Indigenous tribes in both federal and tribal court that could potentially slow the progress of pipeline construction.

The Red Lake Band of Chippewa Indians, along with other tribes and environmental challengers, are opposing the project’s 404 permit from the Army Corps.

They argue in the suit in the U.S. District Court for the District of Columbia that the Army Corps violated the National Environmental Policy Act and other federal laws when it issued the water permit without conducting its own rigorous analysis of the potential environmental harms of the project.

The case is now fully briefed and the parties are waiting to see whether the judge in the case will schedule oral argument, said Earthjustice senior attorney, Moneen Nasmith, who is representing challengers in the case.

The urgency of stopping the construction “cannot be understated,” Nasmith said.

“Enbridge’s activities are causing serious harm to wetlands, waterways, and indigenous cultural resources every day they continue,” Nasmith said in an email.

When the pipeline is operating, the project could spill oil into surrounding watersheds, she continued.

“We will continue to push the Biden Administration to do the right thing and withdraw the permits and will push hard in court for the judge to order all of Enbridge’s activities to cease immediately,” Nasmith said.

In a separate case, Minnesota regulators went to federal court to block a lawsuit that the White Earth Band of Ojibwe and other tribes filed in the White Earth Tribal Court this month.

In that case, the tribes made the unusual argument that by allowing Line 3 construction to move forward, state officials had violated a 2018 tribal law establishing the “rights of manoomin,” or wild rice.

On Aug. 18, Chief Judge David DeGroat denied a request from the Minnesota Department of Natural Resources to dismiss the case.

State officials had argued that the state was entitled to sovereign immunity protections in tribal court, including under the 11th Amendment of the Constitution. They also argued the tribal court did not have jurisdiction to hear the case.

But DeGroat countered that the state’s sovereign immunity claims should give way to the White Earth Band of Ojibwe’s “inherent sovereignty.”

“In passing legislation to protect its vital resources, the Band must also be able to exercise the jurisdiction to carry out that legislative purpose,” the judge wrote. “To hold otherwise reduces tribal sovereignty to a cynical legal fiction.”

A ruling in the tribal case would enable the White Earth Band of Ojibwe and other challengers to eventually bring their tribal law case to federal court, but the legal process will likely take time (Energywire, Aug. 6).

These cases come after tribes and environmental groups failed to convince state courts to block the project from moving forward.

In June, the Minnesota Court of Appeals sided with Enbridge and the Minnesota Public Utilities Commission, finding that there was a demonstrated need to replace the Minnesota segment of the aging pipeline (Energywire, June 15).

But last week, the state filed for an injunction in the U.S. District Court for the District of Minnesota to block the case, arguing that the tribal court doesn’t have jurisdiction to hear the case because the Minnesota Department of Natural Resources and its employees named in the lawsuit are not members of the White Earth Band.

Professor Klass said it’s hard to know how the case in Minnesota will unfold given there’s not a lot of case law on rights of nature in the United States.

“It’s a tribal court, so it’s got its own jurisdiction,” she said. “They’ll need to figure out some of their jurisdictional issues between tribal court and federal court, those sorts of things.”