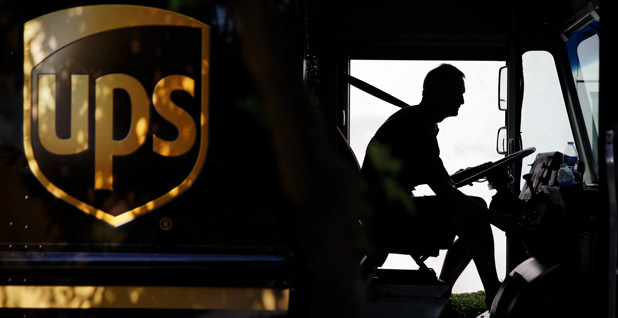 The Obama administration wants to require federal contractors, like UPS Inc., to disclose more information about their views on climate change. The proposal has gone largely unnoticed. Photo courtesy of AP Images/David Goldman.

The U.S. government is the world’s biggest buyer of supplies and services, with a $450 billion annual budget. Soon, federal contractors might have to talk about climate change to get a piece of that pie.

The Department of Defense, the General Services Administration and NASA proposed a rule in May that would compel suppliers of all federal agencies to say whether or not they publicly disclose their greenhouse gas emissions and their goals to cut them. The rule would also require them to list the website where those strategies are made public.

"This proposed rule asks no more than what private companies could ask of their vendors," Jim Bruce, chief energy policy officer at UPS Inc., wrote in a letter supporting the rule.

UPS was one of 17 organizations and people to comment on the proposal, which has gone largely unnoticed. Bruce said UPS has disclosed its greenhouse gas emissions since 2002, making the proposed requirement a modest step for the giant delivery company. In this period of accumulating scientific findings about warming, it’s common for companies to reveal their carbon contributions and the strategies to address them, Bruce said.

But not everyone sees the rule as benign. Critics view the proposal as a progression of regulations requiring companies of all kinds to acknowledge the presence of climate change and to do something about it. Some also see a subtle threat. If a company doesn’t count its emissions, it might be less competitive when seeking lucrative federal contracts.

"What we’re finding these days is more of government contractors need to prove their innocence," said Jimmy Christianson, counsel for the Associated General Contractors of America, which represents 26,000 construction companies. "They’re guilty until they report their innocence."

Even supporters see it as a sign of growing green expectations.

The proposal "is only the beginning of other requirements that are likely to follow," said Bruce of UPS.

The rule reflects the Obama administration’s effort to frame climate change as an economic threat that is best addressed by measuring risks — rising seas, eroding ecosystems, stronger storms, disrupted trade routes and pernicious drought — and managing them in earnest.

The White House recently pressed the Securities and Exchange Commission to enforce financial disclosure of climate change business policies, and it laid the groundwork to overhaul the power sector through U.S. EPA’s Clean Power Plan. It’s the administration’s assertion that addressing climate change now instead of later could prevent physical damages and reduce economic impacts.

The disclosure rule proposed in May would apply to companies that received $7.5 million or more in federal contracts in the previous financial year (Greenwire, May 25). It would cover about 5,500 companies, including 2,700 small businesses, federal officials said. All told, those figures represent roughly 3.5 percent of all businesses and 2.6 percent of small businesses that contracted with the government in fiscal 2015.

It’s unclear when the rule will be finalized.

‘Call me a conspiracy theorist’

Critics worry that it could single out firms that don’t disclose carbon data, decline to share that information or don’t track it at all. Christianson said the proposal doesn’t ask for a lot of information, but he said it could lead to burdensome regulation and punish small companies nonetheless. He also wondered if the data disclosed by businesses could lead to additional questions and more climate rules.

"Call me a conspiracy theorist, but past is prologue," he said. "Every time they ask for this information, then we get some other rule that says, ‘Based on the information we received … ‘"

Officials said the objective is to create an inventory of greenhouse gases, then slash carbon emissions from the government’s budget. They estimate that it would take businesses 15 minutes to complete the rule’s paperwork requirements.

Airlines for America (A4A) represents a handful of airlines, including American Airlines, Air Canada, Southwest Airlines and United Airlines. Its members also include freighters like FedEx Express and UPS. So it speaks on behalf of firms that might be affected by the rule.

Nancy Young, vice president of environmental affairs for the group, said A4A takes climate change seriously and its members already report how much fuel they burn. She also said comparing different industries and different-sized companies by emissions can be misleading.

"It would be no problem for airlines to provide the information; we have lots of information on emissions," Young said.

But the group is concerned about how the government could use the information gleaned from this rule in purchasing decisions.

But others say there are significant gaps in the business world’s planning for potentially disruptive changes to the atmosphere. Brian Johnson, a campaigner at Greenpeace, said the U.S. government is lagging behind the private sector on climate disclosure. And he predicted that contractors would capitulate.

"The government’s the customer here," Johnson said. "Government contracting is a lucrative business, and if the government has a requirement, contractors will meet it."

The rule hasn’t generated much attention. Seventeen people or organizations took advantage of the public comment period. And, perhaps tellingly, Senate leaders were unaware of the rule when asked about it last week.

Sen. Dick Durbin (D-Ill.) also said he hadn’t heard about it. "No, but I like it," Durbin said after the rule was described to him. "It’s a good step, when you consider there’s no, underline no, support from Congress for even recognizing climate change and doing something about it."

Three-quarters of the 20 biggest federal contractors in 2015 publicly share their emissions, goals to slash them or both, according to federal procurement data and Ceres, the sustainable investment advocacy group.

"Not a lot of federal contractors have this on their radar," said Colleen Morgan, president of Corporate Sustainability Advisors, a consultancy group. "Certainly the bigger companies do, the publicly traded companies more and more so."

Morgan said the rule would prompt firms to track their emissions, potentially helping them lower their energy costs and save money. Under previous policies, the U.S. government pledged to cut carbon emissions from its suppliers and curb costs, Morgan said.

"This little rule wraps those two things up in a nice little bow," she added.

Suppliers can see the payback in disclosing emissions, according to Betty Cremmins, a senior manager within CDP’s supply chain program.

Companies that for at least three years have disclosed climate information to CDP, a London-headquartered group formerly known as the Carbon Disclosure Project, and are trying to reduce emissions saved on average $1.5 million apiece, according to a recent report from the group.

Cremmins said it can take roughly three years from when a firm begins disclosing greenhouse emissions until it shows progress.

"If a company is less sophisticated, that’s all the more reason to get started," Cremmins said. "It’s a journey, and nobody comes out of the gate swinging."

Still, Christianson, the construction lawyer, has his doubts.

He said construction companies are directly responsible for only a sliver of carbon emissions. Then he seemed to issue a warning. Government regulators shouldn’t alienate the companies that Washington relies on to achieve broader carbon reductions, he said.

"Be careful when it comes to regulating the industry that you need to have by your side when it comes to constructing green facilities, helping reduce traffic congestion and institute the things that are necessary to actually reduce greenhouse gas emissions," Christianson said.