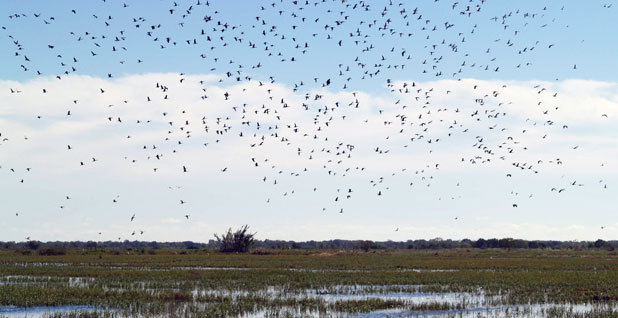 President Trump's nominee to lead U.S. EPA, Scott Pruitt, has said one of his top priorities is repealing and replacing the Clean Water Rule, which determines whether wetlands fall under federal jurisdiction. Photo courtesy of Ducks Unlimited.

As Oklahoma attorney general, Pruitt sued the Obama administration over what he deemed an unlawful expansion of federal regulatory power over isolated streams and wetlands. And if he’s confirmed as EPA chief, he has said he will replace the rule.

But legal experts say killing that rule is one thing, replacing it another.

The regulation — which is also known by an acronym, WOTUS, for "Waters of the United States" — was written by the Obama EPA and Army Corps of Engineers in an effort to help regulators and landowners end a murky, decadeslong legal battle over the reach of the Clean Water Act.

At issue: unclear case law and a vaguely written statute.

Bernadette Rappold, former director of the EPA Office of Civil Enforcement’s Special Litigation and Projects Division, said all the legal baggage complicates the effort to write a clear, scientifically defensible rule for protecting areas that are valuable as filters for water pollution, buffers for floodwaters and habitat for wildlife.

"It’s not an easy task to begin with, determining federal jurisdiction, and not something most scientists or lawyers know the answer to," said Rappold, who now works for Greenberg Traurig’s environmental and litigation practices. "And you’re never going to get to write on a clean slate, but this is a pretty well-scribbled-on slate where you have to try to find room in the margins."

EPA’s responsibility for defining which waterways are covered by the Clean Water Act springs from Congress’ failure to write specifics into the 1972 law.

The law says only that it applies to "traditionally navigable waters of the United States."

Though the law has been amended numerous times and though bills have been introduced in each of the past eight congressional sessions to define "waters of the U.S.," the term has never been redefined, leaving it up to EPA’s discretion and to the Army Corps, which administers the Section 404 permit program.

"Congress has a lot of free rein and isn’t tied by the statute, they can change it, but they just haven’t been functional enough this decade to agree on the scope of jurisdiction," said Tom Driscoll of the National Farmers Union, which doesn’t support the Obama rule but is wary of how the Trump administration might try to roll it back. "Without any further explanation of how far traditionally navigable waters go up the landscape, it sows the seeds of where we are today."

The result is a tug of war spanning 40 years between EPA and the courts wherein each attempt to define "waters of the U.S." is challenged in a lawsuit. Federal courts have thrown out parts of the regulations, sending EPA back to the drawing board to try again until the next legal challenge.

The courts have put WOTUS on ice while litigation plays out. The Supreme Court agreed last month to take up the challenge brought by more than 30 states and many industry and farm groups (Greenwire, Jan. 13).

EPA’s big Supreme Court win came in 1985, when the justices ruled the Clean Water Act could extend to wetlands that are adjacent to navigable waters and not just water used for shipping.

But in 2001 and 2006, the high court limited federal jurisdiction, writing vague and confusing decisions that have haunted regulators, landowners and developers ever since.

Most notable is the 2006 Rapanos v. United States decision, a 4-1-4 muddle. Led by Justice Antonin Scalia, conservative justices argued that the Clean Water Act strictly applied to "navigable waters." The court’s four liberals argued for a far more expansive view of the law, saying it should include most wetlands.

Justice Anthony Kennedy, the court’s swing vote, ultimately sided with conservatives, agreeing to throw out the regulation EPA had then but arguing some wetlands should be covered by the law. In order to qualify for federal protection, he wrote, waters must have a "significant nexus" to actually navigable rivers and seas.

That test has haunted EPA.

Through the years, lower courts have held that EPA regulations must meet Kennedy’s test, which uses an arbitrary legal term to describe what must ultimately be a science-based determination (Greenwire, June 5, 2015).

"Kennedy created the confusion," explained Larry Liebesman, a water attorney with Dawson & Associates. "He created a legal language to decide how far you go into the landscape, and EPA is left figuring out what that meant scientifically."

The Obama administration wrote its regulation to meet the "significant nexus" test if the rule were challenged in court, and the need to pass that test won’t go away under a new administration, Vermont Law School professor Pat Parenteau said.

He argues that the Rapanos decision was so damaging and confusing that the court should not have agreed to take the case to begin with.

"There’s only nine of them," he said. "If it is that difficult for them to say what the law is, how could they have thought anyone else would agree? It’s a hopeless task for EPA."

Don Parrish, senior director for regulatory relations at the American Farm Bureau Federation, one of WOTUS’s fiercest critics, said the rule must be repealed and then replaced.

"We want it to be withdrawn and replaced, with both of those words in capital letters," Parrish said.

With the regulation tied up in the courts, the question of federal jurisdiction reverts back to guidance from the George W. Bush administration.

The Bush guidance acknowledges that federal jurisdiction may not cover the same types of wetland features in different areas, meaning regulators must slog through fields to examine isolated wetlands and determine whether each warrants Clean Water Act protection.

Liebesman said the Bush guidance attempted to be legally sound by following the principles of "foreseeability" and "proximate causation."

Courts have ruled that those principles apply to other environmental laws, like the Endangered Species Act. In Section 404 of the Clean Water Act, those principles mean the government would have to prove that damaging an isolated bog or swamp would have negative impacts downstream on "traditionally navigable waters" in order to assert federal jurisdiction.

The guidance is legally sound but not very practical for landowners who want to know clearly whether a soggy area is federally protected without having to hire consultants.

"When you go away from these bright lines and make it more site-specific, it does create more uncertainty," Liebesman said. "You don’t know if a tributary 5 miles away from navigable water is going to be regulated. That is a burden and a risk."

The Obama rule was the first attempt since Rapanos in 2006 to create clarity. Doing so required drawing so-called bright lines that categorically included and excluded some waterways.

Consider the Bush guidance, which defines a tributary as a body of water with an ordinary high-water mark that carries flow directly or indirectly into another body of water and is proved to have "more than a speculative or insubstantial effect on the chemical, physical or biological integrity of a traditionally navigable water."

The Obama rule, by contrast, says tributaries have a streambed, two banks and an ordinary high-water mark, with no need to prove their impact downstream.

"The issue of needing greater clarity with regard to the scope of the Clean Water Act is one folks have been suffering under for literally decades," Joel Beauvais, who led the Obama EPA’s Office of Water, said in an interview last month (Greenwire, Jan. 18).

Though the Obama definition is simpler than Bush’s, it also includes more tributaries. And many industry groups felt it was simply drawing bright lines where environmentalists wanted them, without listening to agricultural or real estate concerns.

"It was totally political," Parrish said. "They did not conduct themselves in a fair or substantial way. They had their agenda, and they just moved it into place."

Industry has also criticized the Obama administration for not making its regulation clear enough and not following procedural requirements.

While Parrish is not a fan of the Obama regulation, he also concedes that "the Bush guidance isn’t good enough."

"There needs to be some pretty bright lines out there," he said. "We need to understand where in the heck jurisdiction is."

Jonathan Adler, a law professor at Case Western University who maintains the Obama administration overstepped its authority, said he appreciates that it tried to create certainty and hopes the Trump EPA will also strive for clarity.

"The Bush administration basically put their heads in the sand," Adler said. "They began thinking about rulemaking, realized it might be politically controversial and so punted with guidance that was not terribly helpful. It wasn’t as expansive as the Obama rule, but it didn’t provide clarity. The Obama administration, to its credit, sought to actually do a rulemaking, which is what has been missing for some 15 years."

Pruitt told Congress during his confirmation hearing that he believes the Obama EPA exceeded its authority by including occasionally wet ephemeral streams and allowing prairie potholes to be considered as a system on a case-by-case basis. Prairie potholes are freshwater marshes mostly found in the Upper Midwest.

By moving back some of the bright lines drawn by the Obama administration and restricting federal protection, WOTUS foes say, Pruitt is less likely to wade into areas where a case-by-case analysis might be required, instead simply setting them outside the bounds of the Clean Water Act.

"I don’t know where the line is," he said. "The stuff people don’t agree on, we should save that for another day."

But Parenteau of Vermont Law School maintains that approach would not be scientifically defensible.

"We are chasing a metaphysical object, which is where does federal jurisdiction end, and we are using science to do so," he said. "But there really isn’t an end. It is a water system."

Creating a regulation with scientific chops will be critical for the Trump administration.

Once the Trump EPA contends with the ongoing litigation against the rule, likely asking a judge for a voluntary remand to pause the court cases while he revises the regulation, any changes would have to follow the Administrative Procedure Act.

That means any changes made by the administration would need scientific backing. As EPA chief, Pruitt would have to dispute, among other things, the 408-page technical report that accompanied the Obama regulation and a review from the agency’s Science Advisory Board, which largely supported the final version of the rule.

"I am comforted by the fact that any attempt to revise the rule will have to take into account the scientific record that exists for the current rule," said Jon Devine, senior attorney for the Natural Resources Defense Council, who has argued the Obama rule should have included more protections.

Parenteau agrees, saying that without scientific backing, Pruitt would face embarrassing questions from a judge, which could put his a new rule at risk.

"They will ask, ‘Why would you decide that waters that have been upheld in the past as being regulated are not? What exactly is your justification for that, counsel? The election? I didn’t know that was on the ballot,’" he said.

Ultimately, Greenberg Traurig’s Rappold said, Pruitt’s best bet might be to ask Congress to vacate WOTUS, allowing him to write a new one as though the Obama administration never acted on the issue.

Or, she said, he could provide a lackluster defense of the regulation in court in hopes that a judge might throw out sections the Trump administration doesn’t like.

Such a strategy might not be so bad for environmentalists, either, she said.

"Because this is a full regulation, and not a specific case, it could frame the issue in a way that could allow a court to be more definitive in a ruling," she said. "Courts are political animals, but with litigation, you do have some authoritative figure saying how far you can go and no farther. It’s another set of eyes."