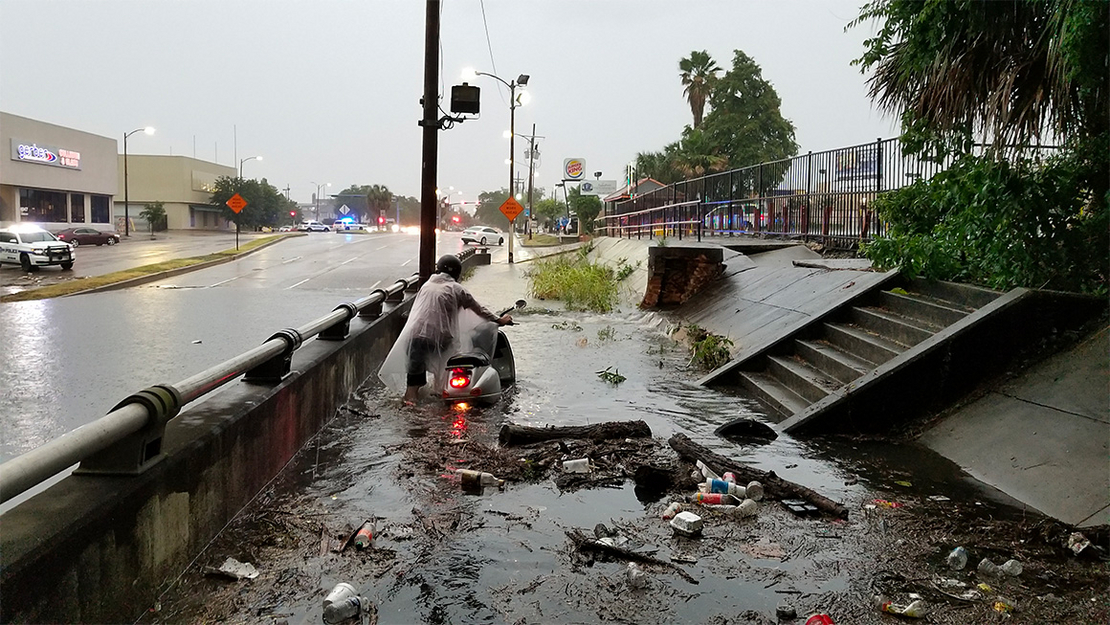 Flooding in New Orleans in May 2018. Bart Everson/Flickr

The Louisiana State Bond Commission has twice voted to delay approval of a future $39 million line of credit for a power station to run New Orleans drainage pumps that would protect the city’s 384,000 residents from flooding and have been described as critical for the city’s ability to adapt to climate change.

Both votes, each taken at times when New Orleans was under an active flood advisory, have been at the urging of Republican Attorney General Jeff Landry, who is enraged by city officials’ response to the near-total abortion ban.

“This is them coming right out to the rest of the citizens of the state saying, ‘We don’t care what your law is,’” Landry said at yesterday’s commission meeting.

Louisiana’s abortion ban does not include exemptions for rape or incest, and has forced closure of abortion clinics throughout the state, including in New Orleans. City officials have made their opposition clear, with the City Council passing a resolution this summer asking police, sheriff’s deputies and prosecutors not to enforce the ban. In response to the resolution, which has support from New Orleans Mayor LaToya Cantrell, the sheriff said she would not accept inmates accused of violating the ban at the jail, and the district attorney said he would not prosecute abortion providers or patients.

While New Orleans police officers have been directed to investigate alleged abortions and write reports about them, officers have also been instructed not to issue summons or make arrests.

Landry called such moves a “dereliction of duty,” with the potential 2023 gubernatorial candidate telling the commission it should “use the tools at our disposal to bring them to heel, quite frankly.”

The commission agreed, voting 7-6 yesterday to delay approving the line of credit another month and to send a letter to city officials asking them to appear at the next meeting and explain their position. The commission resisted Landry’s proposed motion to permanently withhold approval of the credit line until the New Orleans City Council rescinds the resolution.

The vote was immediately decried by New Orleans officials, with City Council President Helena Moreno saying the city would not back down from its abortion stance.

“The City of New Orleans will not prioritize targeting women and their doctors who are balancing what is best for the patient and gray areas of the law,” she said.

She highlighted the case of a Baton Rouge woman who was denied an abortion despite her fetus having no skull — a fatal condition — as an example of the types of patients New Orleans is trying to protect.

“The fact that the City of New Orleans is being punished for its careful consideration of new state laws is troubling and inappropriate,” she said. “In my opinion, all that has been accomplished by some members of the bond commission is to show that they do not care for the people of New Orleans, nor do they care and have compassion for women who are facing incredibly tragic circumstances.”

Cantrell agreed, calling the vote a “manufactured crisis of the Attorney General.”

“I will continue to prioritize necessary improvements to our City’s aging infrastructure, while fighting for the reproductive rights of all women,” she said.

That Landry is only targeting flood relief funds actually represents a slight backtrack in his position. Last month, he wrote a letter to commission members and state Treasurer John Schroder saying the body should defer funding for all New Orleans projects until city officials reversed course.

“It is my belief that a parish or municipality should not benefit from the hard-working taxpayers of this state while ignoring laws validly enacted by the people through their representatives,” the letter said.

After lawmakers indicated that they would not delay all funding to the city, Landry’s office focused on the pumps project. He did not object to commission votes yesterday to approve funding for two other New Orleans projects, including one that would improve the sewage system in accordance with a federal consent decree.

But Landry’s position has continued to enrage Schroder, who is also rumored to be considering a 2023 gubernatorial run. The state treasurer believes the bond commission, which is made up of statewide elected officials and Legislature leaders, should be nonpartisan and noncontroversial, noting that the Legislature had already included the flood funding in the state’s capital outlay budget.

“We’re playing politics with this. I don’t like it,” Schroder, who hails from the New Orleans area, said at last month’s meeting. “This is a bad, bad road to get on.”

Schroder did side with Landry when the commission voted 12-2 to delay approving the future line of credit for the pump project last month but decided not to vote yesterday.

Instead, he questioned Landry about why the bond commission should become entangled in the abortion debate.

He asked Landry to clarify whether city officials had actually broken any laws, and whether the attorney general’s office could use its other authorities to investigate that rather than the bond commission withholding credit approval.

“I don’t punish all my kids for what one does,” he said. “I don’t think we should punish the individual economies, and that’s why I asked is there a way to do this legally instead of having this debate.”

Landry replied that though the Louisiana Constitution would allow the attorney general’s office to supersede the district attorney on criminal matters, that provision has never been used.

“It is not as final or clear or efficient as what we are doing today,” he said.

That included Jay Dardenne, who said that even if New Orleans officials appear at the commission meeting next month, they are unlikely to capitulate. The commission should simply give its approval without delay, he said.

“It’s a shame that we are playing this game with these types of projects that are so important to the people of Louisiana,” he said.

Though New Orleans elected officials did not attend the meeting, they did send Paul Rainwater, a lobbyist who works on behalf of the city and of the New Orleans Sewerage and Water Board, which is in charge of the power plant project in question.

He tried to reason with Landry, arguing that the City Council’s resolution was freedom of expression protected under the First Amendment.

“No laws have been broken,” he said, noting that there are no operating abortion clinics in New Orleans but that the state itself has “assets” within the city that are affected by its chronic flood problems. “You are putting a lot of people at risk without that funding.”

Rainwater told E&E News in an interview that the power project is critical for the city to be able to adapt to climate change.

The plant would power hundreds of pumps placed throughout the city meant to remove rainwater trapped by its levee system. Currently, those pumps are powered by outdated turbines, the first of which was built at the turn of the century during the presidency of William Howard Taft.

The turbines also power the city’s water and sewage system. With the current unreliable power system, heavy rains force operators to prioritize whether to use the generated electricity for flood control or other sanitation needs.

“The torrential rains have become much more frequent, and flooding that used to be caused by a tropical storm or a hurricane we are now seeing with just 3 to 4 inches of rain in no time whatsoever,” he said. “When a warning goes out that we have a thunderstorm going through, we could have flash flooding, and in some parts of the city, you may see 2 to 3 feet of water.”

The city and Entergy New Orleans are paying for the majority of the project’s cost, but state funding will be necessary to complete the project on time in the third quarter of 2024.

The bond commission’s approval of a future line of credit would not immediately release project funds, but rather put the project forward for the Legislature to actually fund in its next appropriations bill. Still, commission approval would send a “critical signal” to contractors that funds would be available to finish the project, said Rainwater, who underscored to the commission that he himself is “pro-life, Catholic and Republican.”

“Decouple these issues,” he said. “Find something nonessential to go after, not the sewerage and water board, not the power station, not the pumps.”

“This project is to help us to where we don’t have to drown,” he said. “Don’t tell me you love me but you’re not willing to keep me from drowning. I don’t want to hear that from nobody.”

That argument fell on deaf ears to commission members offended that neither the mayor nor any city councilors appeared at the meeting themselves to explain their abortion stance and ask for the funding.

“This is not specific to the project itself, it is specific to what we as a Legislature have passed and their desire or lack of desire to enforce the law,” state Rep. Jerome Zeringue (R ) said.

One Republican on the commission also expressed concerns about Landry’s approach.

State Sen. Bret Allain, who voted for the abortion ban, noted that the city of New Orleans does not control the sewerage and water board, and said not supporting the line of credit would be “problematic for me.”

“I think we are shooting at the wrong people,” he said. “If we want to shoot at those who did the resolution, let’s take the shot, but let’s not endanger people.”

Matthew Block, the governor’s executive counsel and a panel appointee, pushed back against an argument Landry and Zeringue had made that, just as federal grants come with conditions, so too could the commission place conditions on the line of credit. That’s not allowed under the Louisiana Constitution, Block said.