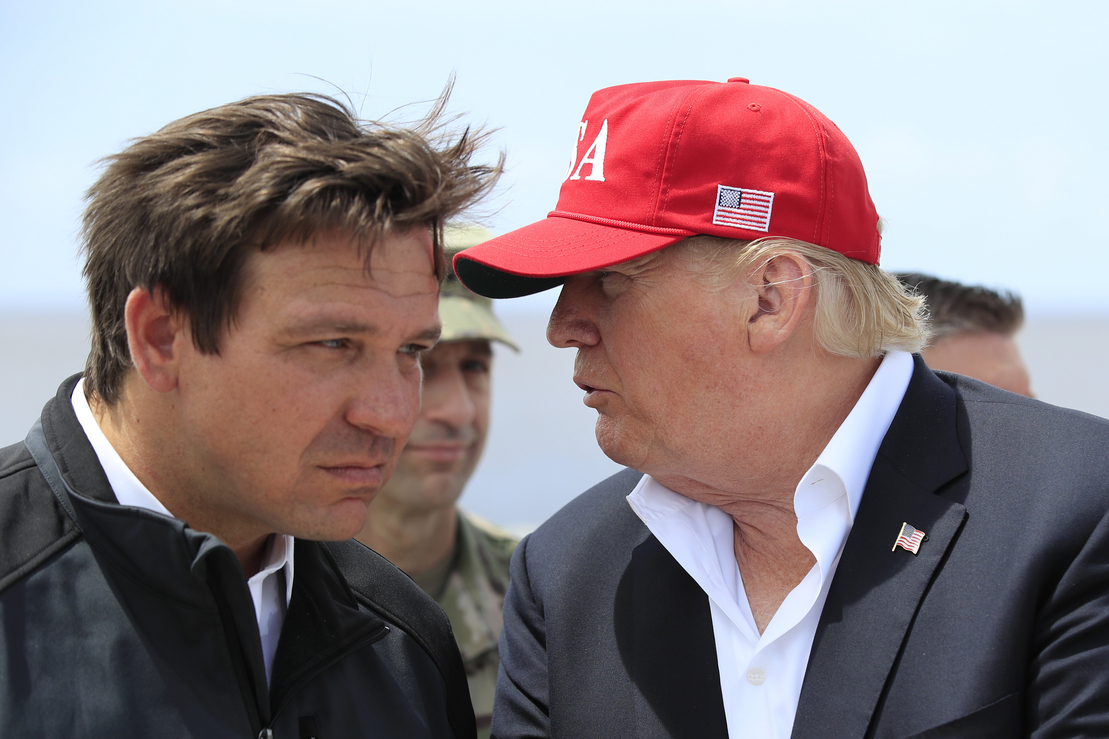 Some of former President Donald Trump’s most high-profile donors in the energy and environment world are backing Florida Gov. Ron DeSantis ahead of his potential challenge against Trump for the GOP’s 2024 presidential nomination.

Energy donors including a New York metals magnate, a Dallas pipeline mogul and a Texas oil tycoon are among the wealthy contributors who backed Trump and have donated in recent years to boost DeSantis, who easily won reelection this month to a second term as governor.

DeSantis is also perceived by some establishment Republicans and GOP donors as an obvious alternative to the former president. The Florida governor is widely expected to launch a primary bid against Trump in the coming months.

“I’m not supporting Trump. I’m not giving him a nickel,” Andrew Sabin, a GOP megadonor and the chair of precious metals refiner Sabin Metal Corp., told E&E News in a recent interview. “In fact, I’m asking him to walk away from this election and stay away.”

Sabin, who has given millions to climate change and other environmental causes, gave $55,000 in April 2022 to a political action committee affiliated with DeSantis, campaign finance records show. Sabin attended a fundraiser for him earlier this year, he said. Sabin donated $2,000 to the pro-DeSantis PAC in 2018.

“I’m all in on DeSantis,” Sabin said this month, noting that the governor hasn’t announced a 2024 campaign, so “we’ll see how it goes.”

Sabin, a major donor to Republicans and environmental causes, was previously all in on Trump. He gave $125,000 to the former president’s 2020 campaign and other causes backing him ahead of the election.

But Trump’s environmental policies and his actions surrounding the Jan. 6, 2021, attack on the U.S. Capitol are among the reasons Sabin isn’t supporting the former president in his 2024 bid.

“I was very, very unhappy with Jan. 6,” he said. “He’s only out for himself, unfortunately.” Sabin blames Trump for the GOP candidates’ losing U.S. Senate runoffs in Georgia in January 2021, which handed control of the Senate to Democrats.

Sabin also criticized Trump’s decision to pull the United States out of the Paris climate agreement and his moves to roll back environmental regulations.

Donations to aid DeSantis in his gubernatorial bids aren’t necessarily an indication that those donors would pick the Florida governor over Trump in a 2024 primary contest. But they are an early indication that DeSantis has caught the eye of some influential megadonors who could eventually help bankroll a presidential bid.

Kelcy Warren, co-founder and executive chairman of the Dallas-based pipeline company Energy Transfer, donated $50,000 to the Friends of DeSantis PAC in September 2021.

Warren, who was also a major campaign contributor to Trump’s first election and his presidential inauguration, benefited from one of Trump’s first policies in office. Trump rescued Energy Transfer’s Dakota Access pipeline with an executive order days after taking office (Greenwire, Jan. 24, 2017).

Energy Transfer did not respond to E&E News’ request for comment about Warren’s 2021 donation to the pro-DeSantis group.

Anwar previously contributed at least $620,000 in 2019 and 2020 to the Trump Victory Committee, a joint fundraising organization formed by Trump’s campaign and the Republican National Committee, according to campaign finance disclosures.

Anwar did not respond to a request for comment about his donation to boost DeSantis in Florida.

Another noteworthy donation to the pro-DeSantis group came from Koch Industries, an industrial behemoth led by billionaire Charles Koch. Koch Industries donated $25,000 to the Friends of Ron DeSantis PAC on Oct. 30, 2022.

The conservative Koch network notably refused to support Trump’s presidential bids in 2016 and again in 2020.

Koch Industries did not respond to E&E News’ request for comment about the recent donation to boost DeSantis.

Former Trump Education Secretary Betsy DeVos was another donor to the pro-DeSantis group. DeVos contributed $5,500 to the Friends of Ron DeSantis PAC in February, records show. DeVos, a member of a wealthy Michigan family of GOP donors, resigned from the Trump administration on Jan. 7, 2021, citing Trump’s role in the attack on the Capitol the day before.

DeVos did not respond to a request for comment about her donation to support DeSantis.