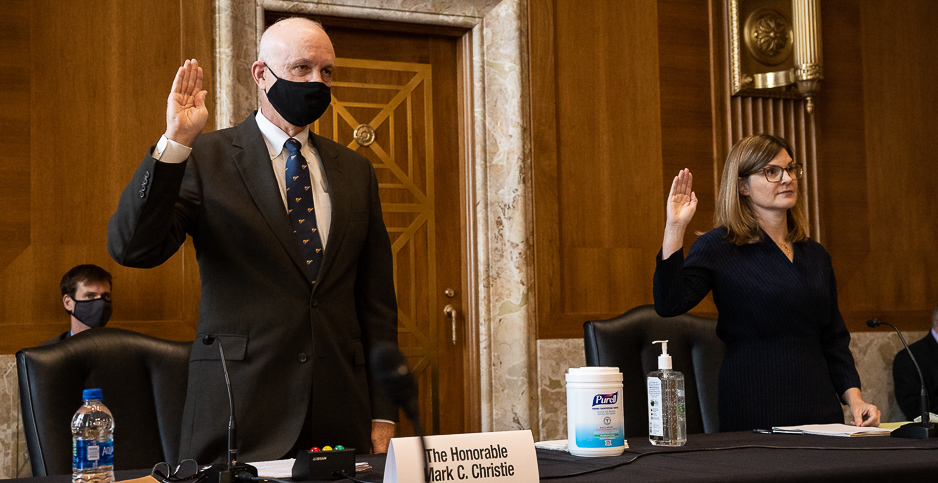 This story was updated at 9:53 a.m. EST to reflect that Vivian Chum no longer works for Commissioner Mark Christie. She left her position in his office just prior to publication, according to sources. She has returned to the Office of Administrative Litigation, an agency spokesperson confirmed.

The Federal Energy Regulatory Commission’s two newest members have tapped a range of advisers — including agency veterans and a few fresh faces — to help steer their work during the Biden administration.

"Advisers are the ones commissioners turn to for confidential guidance on everything that crosses their desk, from draft orders and rulemakings, to recommendations on enforcement actions, to constructing speeches and positions on broader energy policy matters," said former FERC staffer Jeff Dennis, now a managing director and general counsel at Advanced Energy Economy.

Clements, a longtime energy lawyer, and Christie, most recently Virginia’s top energy regulator, are charged with the hefty task of overseeing the nation’s power markets and large scale natural gas infrastructure alongside FERC’s three other members: Republicans James Danly and Neil Chatterjee and Democratic Chairman Richard Glick. This year marks the first time since 2018 that the panel has had a full complement of five commissioners.

"Both Commissioner Christie and Commissioner Clements have done a great job of pulling together a staff team with broad and deep experience in a range of FERC matters, both inside and outside of the building," said Dennis. "This will allow them to get a range of views before making decisions and allow them to more quickly learn how to navigate internal processes, all of which is critical to their success."

Here are the members of Clements’ and Christie’s new teams:

Farmer, an energy analyst and former policy adviser for New York Gov. Andrew Cuomo (D), joined the commission after having launched his own energy consultancy last April with a focus on renewables, power markets and FERC (Energywire, April 30).

He was previously a lawyer at the Natural Resources Defense Council, where he pushed back against a controversial FERC pricing rule that critics said harmed renewable electricity sources. He also helped develop the group’s approach to wholesale energy market rules to expedite clean energy grid integration (Greenwire, Jan. 4).

Clements said at last week’s meeting that Farmer is also a new father to his second child. He and his wife welcomed a baby boy three months ago.

"So in addition to the busy agenda this month, he’s not getting a lot of sleep," she said.

Prior to joining Clements’ team, Clayton spent five years working as an attorney in the Division of Investigations in FERC’s Office of Enforcement.

Before that, she served as a partner and the chair of the energy and environmental practice group at the law firm WilmerHale, where she focused on enforcement defense, internal investigations, corporate compliance programs, and regulatory and policy advice, according to her LinkedIn page.

"Carol lives with her husband and dog just across Rock Creek Park from me, has two children, and it sounds like she spends a lot of her free time horseback riding," Clements said. "So that is of interest."

Clayton also focused on international human rights while she was a partner at the firm Skadden, Arps, Slate, Meagher & Flom LLP during the 1980s.

Corum, who has spent 12 years at FERC, joined Clements’ team from the Office of Energy Market Regulation after completing a five-month detail advising Chairman Glick. While working at the commission, Corum earned his Master of Business Administration at the University of Maryland.

"Byron is a newlywed," Clements said. "He’s lucky enough in our COVID era to live in the same neighborhood as his parents, and is apparently learning Spanish in his free time."

FitzPatrick specializes in the Federal Power Act and in the regulation of wholesale power markets.

"And apparently, he knows a thing or two about tennis and travel," Clements said.

De Taboada graduated last year from the University of California, Berkeley, with a bachelor’s degree in political science. He joins Clements’ team after having served as a legislative intern for the House Select Committee on the Climate Crisis.

His research topics while working for Congress included energy efficiency and utility-scale transitions to carbon-free energy, among others, according to his LinkedIn profile.

Washington joins Clements’ staff from the Union of Concerned Scientists, where she spent four years working in the group’s communication office.

Her work focused on bolstering climate science and policy and expanding clean energy, according to her LinkedIn profile. Prior to that, Washington worked as a science writer for Oak Ridge National Laboratory.

"It turns out she really is a true grid geek," Clements said.

Flynn served as senior legal adviser for Christie’s predecessor at FERC, Bernard McNamee. McNamee announced his departure from the agency last August, expressing a desire to return to Richmond, Va., to spend more time with his family (Energywire, Aug. 6, 2020).

Flynn joined the commission in 2008. She has worked as an attorney in the Office of Enforcement’s Division of Investigations and advised the commission in its show cause order proceedings and order assessing penalties against Barclays Bank PLC. In that 2017 case, Barclays was required to pay $105 million in civil penalties and disgorgement of ill-gotten gains after FERC found it had manipulated electricity markets.

"Tegan is known to all of us from her many years of experience in the FERC Office of Enforcement," Christie said during last week’s meeting.

Flynn holds an undergraduate degree in economics from Smith College and a Juris Doctor from Harvard Law School.

Bagot, who joined Christie’s team as a legal adviser, is "also a FERC veteran," Christie said.

The former associate at Troutman Sanders LLP previously served for over two years as a trial attorney in FERC’s Office of Administrative Litigation. While earning her Juris Doctor at Harvard Law school, Bagot also completed an internship in the commission’s Office of Enforcement.

"Kelsey is now coming back to FERC," Christie said.

Brown is currently serving a detail in Christie’s office and has "been really helpful to me on scheduling and getting all that up and going," he said.

Brown previously held a number of roles at FERC, including as Chatterjee’s confidential assistant (Energywire, Aug. 21, 2017).

She also worked with former Commissioners Colette Honorable, a Democrat, and Philip Moeller, a Republican, during the Obama administration.