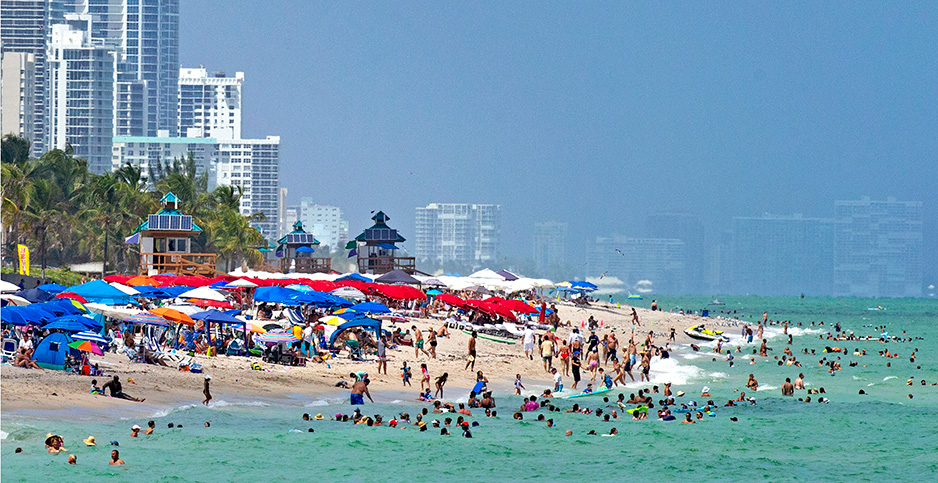 Miami is no stranger to heat. The region’s high temperatures attract tourists each winter, and the local NBA team is even named after the phenomenon.

But heat also killed dozens in Miami last year after the city recorded its hottest temperatures on record — a danger that will only increase as temperatures rise due to climate change.

That’s why Miami-Dade County is taking action, appointing a first-of-a-kind chief heat officer and standing up a task force to help strategize this summer.

It will be a heavy lift. With a population of 2.7 million, the county includes not just the city of Miami, where pavement and concrete increase temperatures, but also rural agricultural communities whose workers are at further risk of heat-related illnesses. The county must also tackle concerns about how potential mitigation measures — like updating housing stock — could exacerbate existing gentrification that’s already driven, in part, by sea-level rise.

Filling that new post is Jane Gilbert, who served as Miami’s chief resilience officer for the past four years. There, she was tasked with writing a climate action plan, which involved talking with residents across Miami.

"Heat came up a lot when we would do outreach to the community as an everyday stress that people experience trying to get to work, sitting in a hot bus stop in open heat, living in substandard housing with inadequate air conditioning," she said.

Heat can be dangerous because it exacerbates people’s existing respiratory and cardiovascular problems. Elderly folks and children, whose bodies cannot regulate temperature as well as young adults, are also at risk of dehydration and heatstroke. Outdoor laborers performing arduous tasks are also susceptible to heat stress and exertional heatstroke because their constantly moving bodies are unable to cool down effectively.

And in Florida, heat is getting worse. One study estimates that the Sunshine State, which has seen an average of seven days per year when temperatures exceeded 95 degrees Fahrenheit during the past three decades, will likely experience up to 32 hot days annually by 2039. Florida can also expect to see as many as 1,840 additional lives lost annually due to heat and humidity, roughly double the number of state automobile accident deaths in 2013.

Gilbert hopes to develop creative ways to mitigate both the heat and climate change itself. Already, her ideas include providing shade at bus stations, most of which are uncovered, and along bike paths, which she says will encourage people to "get out of single occupancy vehicles."

That could be done either with solar panels or by planting trees — something the county has already emphasized through programs like Million Trees Miami, which aims to increase the county’s urban tree canopy to a minimum of 30%, and the Adopt a Tree program that has already provided over 200,000 shade and fruit trees to residents.

Increasing tree coverage could be key to reducing the heat island effect, which occurs when urbanized areas experience higher temperatures than outlying areas because buildings, roads and other infrastructure absorb and reemit heat more than natural, more rural landscapes.

One 2015 study found the city of Miami was the third most intense heat island in the nation. Author Neil Debbage, a professor at the University of Texas, San Antonio’s Department of Political Science and Geography, said that’s in part because large skyscrapers built right on the beach impede coastal breezes from cooling the rest of the city.

"You’re not going to knock down that multimillion-dollar real estate, so it’s creating even small green spaces that would make the biggest difference," he said.

Impacts to the most vulnerable

Another priority, Gilbert said, will be addressing the county’s aging housing stock to ensure that folks can efficiently cool their homes. Retrofitting homes and apartments with better sealant or more efficient air conditioners would not only reduce greenhouse gas emissions, she said, but also make cooling more affordable in a city where someone living at the poverty line may be spending 20% of their income on utilities, compared with middle- or upper-class folks who spend just 3% of their annual household budget on electricity.

"Heat impacts everyone here in Miami, but particularly our low-moderate-income people," she said. "It really impacts our most vulnerable people the heaviest."

She won’t be acting alone. Gilbert will co-chair a Heat Health Task Force this summer with Cheryl Holder, a physician who works with underserved populations and leads the group Florida Clinicians for Climate Action. Her practice serves many agricultural workers, shift workers, and low-income and homeless people, giving Holder a front-row seat to heat’s impact on health.

One patient, she said, has a job outdoors that makes managing her diabetes difficult. The patient doesn’t have enough breaks to go to the bathroom and so doesn’t drink enough fluids to keep up with the heat.

"There is an overall quality of life decline, poorly controlled blood pressures and diabetes, dehydration, and my patients cannot afford to run their air conditioners, so they are always very hot," she said. "That’s what I deal with on a regular basis."

Holder said that she is excited about the task force, and that the county is taking heat seriously in a state where climate change’s impacts are often focused on sea-level rise and its impacts on rich tourism centers.

"The state puts money into sea-level rise mitigation, we have this money for the rich to help save their homes, but the population I work with more inland needs better roofs and more foliage," she said. "If you are going to look at equity, and an equitable response to climate, heat is the No. 1 thing to tackle."

She agrees that more work is needed to help lower energy costs and make cooling more efficient. But she also fears that doing so could exacerbate the county’s existing "climate gentrification problem."

When Miami was first developed, seaside views attracted the wealthy and white to lower ground. That forced minority and low-income communities into areas that were considered undesirable at the time because they were more industrial and near railroad tracks. Today, those areas are growing in popularity among real estate developers and investors because they are more elevated and protected from coastal flooding.

Holder fears efforts to update housing to make it more efficient could backfire if plans are not also made to ensure renovated residences aren’t simply snatched up by wealthier folks looking to move out of flood-prone areas.

Mayra Cruz, climate justice director with Catalyst Miami, a group that works with low-income populations throughout the county, agreed that both heat and gentrification are a concern. Already, people she works with have reported investors offering to buy their homes for much more than they are worth, or rents rising faster than they can keep up with.

"Once you start talking about potential solutions for how to improve housing stock in these elevated areas, there is this fear like, ‘OK, what if others come here now?’" she said. "But, on the other hand, we also work with people who won’t turn their AC on even in the summer because they can’t afford it."

Cruz is hopeful that Gilbert, who she has previously worked on the city’s climate mitigation plan, is well equipped to tackle the problem and all its nuances.

If nothing else, she said, having a chief heat officer will help raise awareness of the issue and how it affects the most vulnerable.

"The attention here has really been lacking, and it is such an equity and justice issue," she said. "It’s really exciting to have someone only devoted to this."

Indeed, Gilbert’s post is the first of its kind in the country. The idea for a chief heat officer in the county came after Mayor Cava struck up a conversation about May being heat awareness month with Adrienne Arsht, the business leader and philanthropist behind the Adrienne Arsht-Rockefeller Foundation Resilience Center.

Because the position was created so quickly, the county has funding for it only for the rest of the year — when Gilbert’s preexisting contract for climate change consulting work ends. One of her first tasks will also be helping the county find money in the budget to make the position permanent.

Resilience Center Director Kathy Baughman McLeod said her group decided to help establish the heat officer position because more attention needs to be paid to heat and its health impacts.

"There are all manner of programs and initiatives and science about flood and fire and drought, but heat is not as dramatic," she said. "It doesn’t rip the roof off your house. If you see an aerial photo of a city that has had a major heat wave, you don’t see a difference. But it’s killing more Americans than any other climate-driven hazard."

"Heat really is the mother ship of climate risk; it is the threat multiplier," she said. "So, when you see a community with heat, with a heat island effect, you need to have somebody waking up every day to act on this."