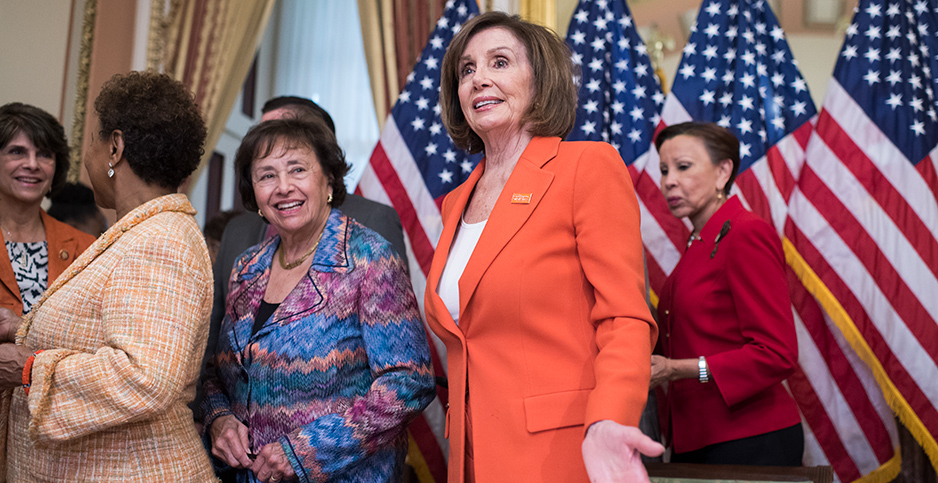 Fights over reviving the Yucca Mountain nuclear waste facility and whether the United States should remain in the Paris climate accord could be brewing this week as the House considers a nearly $1 trillion fiscal 2020 spending package.

The House Rules Committee will meet today and tomorrow to consider which of the hundreds of amendments filed to the package of five fiscal 2020 spending bills, known as a minibus, will get a vote when the legislation heads to the floor Wednesday.

"This will be the first of several minibuses," House Majority Leader Steny Hoyer (D-Md.) said last week, reiterating his goal of the House passing all 12 spending bills before leaving for the July Fourth recess at the end of the month.

Democrats are betting that by marrying the Defense measure to the Labor-HHS-Education bill, they can move the package without any GOP backing.

While liberal Democrats tend to frown on even modest increases for the Pentagon, leaders believe they are likely to go along to get domestic spending raised in the other bills, including Energy-Water.

"I don’t remember five before. But what the hell, if you can get them passed," said Rep. Mike Simpson (R-Idaho), the top GOP Energy-Water appropriator. "It ought to go pretty smoothly."

Simpson and other GOP leaders said not to expect much Republican support with the party whipping against the package until there is a bipartisan agreement on overall spending levels for the next two years.

Supporters of completing the nuclear waste disposal facility at Yucca Mountain, Nev., will propose an amendment that would add $25 million to the Nuclear Regulatory Commission’s budget for licensing activities.

Amendment sponsor John Shimkus (R-Ill.) said last week that it would simply set aside funds for license adjudication, which he noted would allow the state of Nevada to challenge the underlying science.

"It’s not shoveling dirt," he told E&E News last week, referencing the opposition of Nevada Democrats, who with the help of Speaker Nancy Pelosi (D-Calif.) helped keep Yucca money from being added to the bill in committee.

It’s unclear whether that opposition will be enough to prevent a floor vote on the bill, which Yucca supporters say would likely pass with wide bipartisan support.

Simpson said he does not expect Democrats to even allow a floor vote on Yucca, given leadership’s desire to protect House Democrats from the Silver State from any chance of the facility getting built.

"It’ll have to come from the Senate side; I think Nancy [Pelosi] has them pretty much locked down," he added.

The dozens of other amendments submitted to the Rules Committee on Friday touch on a familiar range of issues within Energy-Water, including shifting funding levels around for various Department of Energy offices, climate change and an assortment of Army Corps of Engineers projects.

Multiple Republicans also submitted amendments to strike language in the Army Corps portion of spending bill that would prohibit the agency from using funds on a border wall or barrier. Similar amendments are proposed for the other four spending bills, as well.

While many of the amendments on the State-Foreign Operations bill focus on foreign aid, several GOP proposals would seek to place limits on international environmental efforts.

Several Republicans offered versions of amendments that would remove a rider from the State-Foreign Operations bill that seeks to prevent the Trump administration from using any money to pull the United States out of the Paris climate accord.

Democrats and environmental groups would likely see a floor vote as a way put the GOP on the defensive over its lack of action on climate change.

Other proposed GOP amendments would block any funding for the Intergovernmental Panel on Climate Change, the U.N. Framework Convention on Climate Change or the U.N. Green Climate Fund. Republicans wrote similar restrictions into spending bills when they controlled the House in recent years.

More than 100 amendments have been proposed to the largest annual domestic spending bill, the Labor-HHS-Education bill, with many focused on shifting funds among social programs or immigration policy.

Among the GOP amendments are bids to eliminate most funding for the Agency for Toxic Substances and Disease Registry, an agency focused on minimizing risk from exposure to hazard materials.

Others would increase spending for research on algae blooms that create red tides, block spending on any attempt to block Trump’s executive order on energy infrastructure and deny funding to National Endowment for the Arts projects tied to climate change.

Defense amendments are largely focused on national security policy and funding for weapons and operation and maintenance accounts.

One Democratic proposal would allow $2 million in spending on research into more reliable and efficient energy microgrids in combat zones.

The Legislative Branch bill, the smallest of the annual measures that funds Congress, could see amendments aimed at blocking the first raise for lawmakers in more than a decade and another barring members from sleeping overnight in their offices.

The Homeland Security bill would boost funding for the Coast Guard and the Federal Emergency Management Agency but deny funding for the U.S.-Mexico border wall, while the Financial Services bill would give federal workers a 3.1% pay raise in fiscal 2020.