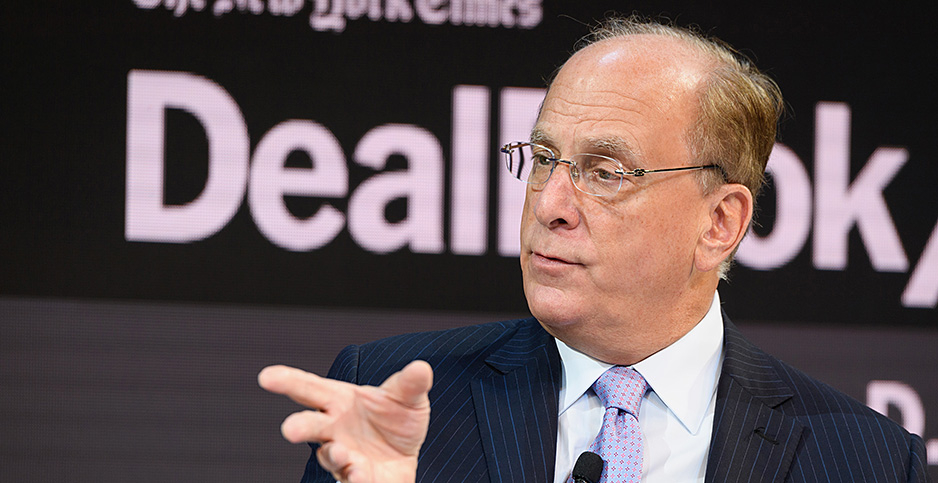 BlackRock Inc. for months has vowed to take a more proactive role in addressing climate change. Today, that promise will be put to the test.

As the world’s largest money manager — with an estimated $8.7 trillion in assets — BlackRock has outsize power to steer the companies it invests in.

That leverage is especially important when shareholders such as BlackRock get the chance to vote on a company’s future direction. Today, the wealth giant will have the opportunity to do just that at the annual shareholder meetings of three major greenhouse gas emitters: utility Southern Co. and fossil fuel giants Exxon Mobil Corp. and Chevron Corp.

"We’ve got three meetings this week, three simple choices, that will really say a lot about the degree to which the large asset managers individually and together are acting responsibly," said Eli Kasargod-Staub, the executive director of Majority Action, a corporate accountability nonprofit.

That’s not all. BlackRock and its CEO, Larry Fink, will face their own shareholders today at the New York-based firm’s annual general meeting. One climate-related resolution is on the agenda: a measure that calls on the firm to become a "public benefit corporation."

The proposal, which is unlikely to pass, aims to push BlackRock to amend its certificate of incorporation to legally ensure that it can prioritize the interests of shareholders, employees, communities and more — including by reducing its contributions to social and environmental problems.

Even if it fails, investors and advocates are likely to pepper BlackRock leadership with questions about the firm’s direction on climate.

BlackRock made waves in February when it said it was prepared to vote against corporate directors — and for climate-related resolutions — at companies that are failing to prepare for global warming.

The pledge at the time was welcomed as an important step forward, given that the Wall Street giant is a top shareholder of countless high-carbon companies (Climatewire, Feb. 19).

But sources say today’s meetings could provide the clearest picture yet into the potential extent — and impact — of BlackRock’s climate ambition.

"These meetings this week at Exxon and Chevron and Southern are meetings of three companies that are inarguably on the wrong side" of climate action, said Kasargod-Staub.

In his eyes, BlackRock and other major asset managers are staring down the barrel of a clear choice: "Are they going to continue to rubber-stamp the election of directors … or are they actually going to hold the board accountable?"

Exxon in the spotlight

The highest-profile gathering of the day belongs to Exxon.

The oil major for months has been embroiled in a heated proxy battle with an activist investment firm — called Engine 1.0 — that is fighting to push the company in a greener direction. That includes an effort to install four directors onto Exxon’s board who the group thinks are better prepared to steer the business toward a net-zero future (Energywire, Dec. 8, 2020).

"We believe that for ExxonMobil to avoid the fate of other once-iconic American companies, it must better position itself for long-term, sustainable value creation," the group wrote in a December 2020 letter to Exxon’s board of directors.

"Doing so," the letter added, "will not be easy and will require a board with a diversified level of insight into the evolving trends, technologies, markets, and policies shaping the future of the industry, yet none of ExxonMobil’s independent directors have any other energy industry experience."

BlackRock — Exxon’s second-largest investor, with a 6.7% stake in the company — appears to have decided where it falls on the matter. Reuters reported yesterday that ahead of today’s meeting, the firm cast its shares in favor of three out of the four dissident directors nominated by Engine 1.0 — while also supporting the reelection of the company’s current CEO, Darren Woods, and lead independent director, Kenneth Frazier.

It’s "a sign that [Blackrock’s] been talking to the company, and they’re not happy with the results," said sustainable investing expert Cary Krosinsky, of Yale University’s School of Management. "This is part of the next wave of incrementalism."

Green groups, for their part, commended BlackRock for backing the new directors. But they also took issue with the firm’s decision to support the reelection of Exxon’s most powerful leaders.

BlackRock did not answer questions from E&E News about the votes telegraphed in the Reuters story or about the firm’s reasoning behind the reported decision.

"As a matter of company policy, BlackRock’s Investment Stewardship group does not disclose its votes ahead of company [annual meetings]," BlackRock spokesperson Devon Burgess said in an email. "Were we to have a commentary on our vote it would come after a company’s meeting."

If BlackRock did in fact back several of the campaign’s nominees, it wasn’t alone.

The United States’ three largest pension funds have all thrown their weight behind the climate-focused campaign. The same goes for influential proxy advisers Glass Lewis and Institutional Shareholder Services, which earlier this month issued reports recommending that Exxon shareholders back two and three of the nominees, respectively.

Even so, support from BlackRock, the proxy advisers and the pension funds doesn’t guarantee success. Whether the nominated directors receive enough support to be elected also hinges on the Vanguard Group and State Street Corp. — Exxon’s largest and third-largest investors, respectively. Together, the so-called Big Three money managers control a 20% stake in the business.

"All eyes now on Vanguard and State Street," Fred Krupp, president of the Environmental Defense Fund, tweeted yesterday. "Will they meet the moment?"

Less certain is how BlackRock will vote on other climate-related matters at Exxon, Chevron and Southern.

As is the case at Exxon, groups including Majority Action have called on shareholders to vote against the reelection of corporate directors at Chevron and Southern.

But according to Boston University School of Law’s Madison Condon, who teaches a seminar on climate-related financial risk, BlackRock often "has very specific examples of why it does and doesn’t do specific things. So it’s sort of anyone’s guess if [BlackRock’s approach at Exxon] will expand to other companies."

Condon also said she wasn’t convinced that the firm’s move at Exxon would translate into support for shareholder proposals that call on Exxon and Chevron to produce separate reports on their lobbying practices and climate-related risks, among other issues.

She said it would be "even more surprising" for BlackRock to vote in favor of those proposals, because climate-related resolutions historically have been viewed by the private sector as efforts to micromanage companies.

Taking a stance on board membership, on the other hand, is not only a more palatable move but also a "pretty powerful move," Condon said. That’s the case because it applies direct pressure on board members who have the ability to control corporate executives’ compensation — and tie it to performance on certain metrics, climate among them.

"It seems like a really big piece of this puzzle … [is] how we incentivize CEOs to behave," Condon said. "That is the chokepoint, or central nervous system, of a corporation."