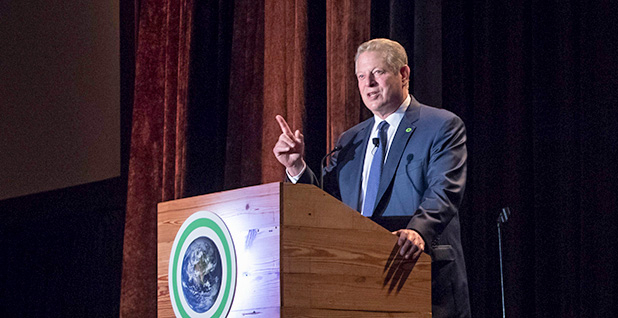 HOUSTON — On the eastern edge of downtown, next to the convention center, sits a 24-story hotel where the energy business is a known commodity.

Everyone from the CEO of Exxon Mobil Corp. to the oil minister of Saudi Arabia has stopped by the Hilton Americas-Houston for a speech. Energy was back on the menu last week, but this time Al Gore was here with an urgent call for change.

Over three days in a city with deep ties to fossil fuel companies, the former U.S. vice president warned that failing to slash our use of coal, oil and natural gas and to rein in carbon dioxide emissions clears the path to rising temperatures and natural disasters.

"My own view is that we should move as quickly as possible away from all fossil fuels, including gas," said Gore, 68, in an interview on the last day of his Climate Reality Project tour in Houston.

By now, Gore’s message is familiar to climate activists: photos of floods and fires; charts of rising temperatures; warnings about food and water shortages, rising sea levels and the spread of disease. Every storm is different in a "warmer and wetter world," Gore said, pointing to this month’s 1,000-year flood in Louisiana and damaging rains in Houston.

At other moments, he sought to be hopeful and inspiring. He essentially asked 600 or so attendees to go out and make waves themselves by changing the minds of people who don’t grasp the climate challenge. Speakers portrayed last year’s climate accord in Paris as an important step toward global action.

Natural gas, a big business in Texas, is one of the thorniest issues in climate and energy debates. U.S. production surged over the past decade as companies used hydraulic fracturing to tap shale gas formations. Gas and power prices have dropped for consumers, and gas has helped power plants cut their smokestack carbon emissions. But gas isn’t carbon-free, and the method of extraction known as fracking is a major bone of contention for environmental groups.

Gore said "many people for whom I have great respect" argue that gas can serve as a bridge fuel, and he acknowledged that burning gas for a unit of energy creates about 50 percent of the CO2 emissions that coal produces.

Still, natural gas is primarily methane, which is a highly potent greenhouse gas. And to Gore, methane that escapes from onshore drilling fields and pipelines undo the benefits of gas when it’s burned by power plants and home heaters.

"We’re trapping as much extra heat energy in the atmosphere every day from man-made global warming pollution as would be released by 400,000 Hiroshima-class atomic bombs exploding every 24 hours," he said. "It’s a big planet, but that’s what’s driving temperatures up."

The 1992 publication of Al Gore’s bestseller "Earth in the Balance" elevated Gore’s stature as a public figure with environmental chops. But his 2006 documentary "An Inconvenient Truth" catapulted Gore into mega-stardom as the foremost climate evangelist.

Gore likened the potential for "unburnable carbon reserves" to the subprime mortgage crisis last decade. Private companies and national oil companies are holding onto oil reserves that won’t get burned in a carbon-constrained world.

"It’s going to be a little bit like what happened when the holders of those subprime mortgages suddenly realized, ‘Oh, wait a minute, this is worthless,’ and the market collapsed," Gore said.

Gore, in last week’s interview, described "an almost total collapse of the global coal industry as measured by market capitalization." For oil and gas, his talk of a deteriorating long-term business would seem to open the door to falling employee numbers and a need to shift business models in a sector already battered by low prices.

"I fully understand the seriousness of the economic challenge that faces the industry as they begin to recognize that this climate crisis is an existential threat to the human future," Gore said.

The future of fossil fuels has taken on a legal dimension as some state attorneys general probe Exxon’s statements on climate and the way it communicated its financial risks to investors (Greenwire, March 29). Meanwhile, U.S. House Republicans, led by Texas Rep. Lamar Smith, are attempting to subpoena state officials and probing climate advocacy groups, including Gore’s, over allegations they "colluded" to jointly pursue a legal battle against Exxon.

"The risk of climate change is clear and warrants action," said Exxon spokesman Scott Silvestri, in a statement. He said Exxon is "reducing greenhouse gas emissions in its operations, helping consumers reduce their emissions, supporting research and participating in constructive dialogue on policy options."

But Silvestri said Exxon rejects allegations it suppressed climate change research, calling that a distortion of the company’s public work with various institutions. He labeled allegations about Exxon’s climate research from "media and environmental activists" not accurate and "deliberately misleading."

"To suggest that we had reached definitive conclusions, decades before the world’s experts and while climate science was in an early stage of development, is not credible," he said.

A vocal segment of Texas certainly isn’t on board with Gore’s fossil-fuel-free vision. In a May news release, the Texas Public Policy Foundation touted a book called "Fueling Freedom: Exposing the Mad War on Energy." Kathleen Hartnett White, a co-author of the book, has questioned the idea that catastrophic warming will occur and suggested climate science needs to be examined in a less politicized way.

"At the present time, there are no alternative energies that can supply the goods and services that hydrocarbons now handily provide at the colossal scale required," White said. "The young shale revolution means access to abundant energy for centuries to come. Climate policies to decarbonize would force an energy regression for the first time in human history."

But Gore was upbeat about the progress wind and solar have made in the past decade. He noted that some countries can leapfrog in technology, going straight to solar panels and avoiding the sort of electric grid found in developed nations.

So how will the power sector change? Gore said it’s hard to predict, but he suggested a "hybrid outcome with the increasing integration of renewables and rooftop solar and batteries in the home and business and also in the grid itself."

As batteries become more affordable and efficient "you’re going to see off-grid options chosen by more and more businesses and homeowners" if there aren’t reforms, he said.

He noted that Texas, where power flows are handled mostly by the Electric Reliability Council of Texas, worked to build lines to move power from the western parts of the state. A competitive renewable energy zone infrastructure program in Texas had a price tag of about $7 billion.

Texas now has the most installed wind energy capacity of any U.S. state, according to the American Wind Energy Association. And there’s hope that many solar projects will soon take off in the Lone Star State.

"Texas has done a lot of imaginative things on energy as you might expect because it’s the center of the energy industry," Gore said. "But what Texas has done on wind and what it’s in the process of doing on solar is going to be really an example for the rest of the country."

Gore also made time to stop by Georgetown, Texas, recently. The city is near Austin and has a municipal utility operation that’s expecting to go all renewable in its power sources by sometime next year.

‘Belly of the beast’

More broadly, Gore said he wished many in the electric industry would stop trying "to use their legacy political and economic clout to get state legislatures to throw roadblocks in the path of solar and wind."

Gore spoke happily to a group of attendees about crossing a line where electricity from solar and wind can be cheaper than power from fossil fuels. It’s like the difference between 32 and 33 degrees Fahrenheit, he said.

"It’s the difference between markets that are frozen up and markets with liquid flows of capital finding new investment opportunities, and that is what is happening worldwide," Gore said, noting the creation of new jobs from renewable businesses.

Gore also held out hope that people "working to make nuclear safer and more affordable and more acceptable" will succeed.

Progress among transportation may be slower at times, but Gore is eyeing momentum from electric vehicles.

"Transforming the transportation sector is really one of the most important things we can do, to go electric and get the electricity from renewable energy," he said.

NRG Energy Inc., a power producer with a major presence in Texas, is one company that’s seen ups and downs with both traditional and emerging businesses. Last December, NRG ousted David Crane as CEO in light of a falling stock price, weak power prices and questions about green investments (EnergyWire, March 8).

"I like David Crane," Gore said in last week’s interview, "and yet the story of what happened at NRG is a little more complicated than the simple narrative that he invested in renewables and got pushed out. That’s not the entire story. They continued investing in fossil fuel generation even as the industry was collapsing."

Gore said last week he knows he’s been around a long time. He told trainees a story about a woman who came up to him at a restaurant and said: "You know, if you dyed your hair black you would look just like Al Gore." After he spoke, she added: "You sound like him, too."

People at the Houston event came from Texas and all over, but just being in the home of oil and gas seemed to hover over some sessions. As did Gore’s presence.

Courtney Forbes, who said Gore connected with her both intellectually and emotionally in a presentation, used to live in Texas.

The 59-year-old said she’d like to see Houston become a "new kind of energy town." She’s now a resident of Louisiana, which also has major ties to oil and gas.

"But this is the belly of the beast," Forbes said, standing inside the Hilton Americas in downtown Houston. "This is where we need to be because we are not going to win until we all win together."